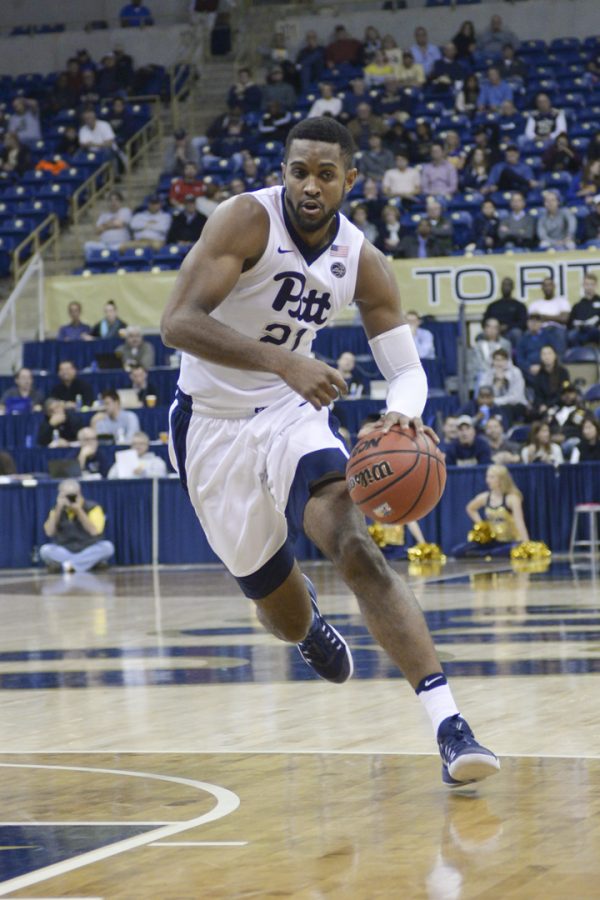 Pitt senior forward Sheldon Jeter had 12 points — all in the first half — in the Panthers' 77-66 loss vs. Syracuse. Wenhao Wu | Senior Staff Photographer

Any lasting euphoria from the Pitt men’s basketball team’s overtime win against the No. 11 Virginia Cavaliers on Wednesday quickly vanished Saturday afternoon at the Carrier Dome in Syracuse, New York.

The Panthers (12-4 overall, 1-2 ACC) fell to the Syracuse Orange (10-6 overall, 2-1 ACC), 77-66, in a game that was never as close as the final score indicated. The win marked Syracuse’s first victory against Pitt since Tyler Ennis’ buzzer-beating 3-pointer clinched a 58-56 win in February 2014, with the Panthers winning five straight matchups in the rivalry before Saturday’s game.

The Orange jumped out to a quick start early in the first half and didn’t look back. Pitt tied the game at six on a pair of free throws by senior point guard Jamel Artis, but Syracuse quickly blew the game open by scoring 30 of the next 32 points, including 22 in a row.

Led by senior guard John Gillon, the Orange managed to affect the game at every angle. From timely 3-point shots to easy layups to contested fadeaways, everything seemed to be working — all made possible by the Syracuse vaunted 2-3 zone defense.

The Panthers’ usual barrage of threes seemed to fall flat at every attempt, as they shot 0-for-7 from beyond the arc in the first half. Meanwhile, the red-hot Orange shot 50 percent from deep, finding the bottom of the net on eight of 16 attempts.

True freshman Tyus Battle led the Orange in scoring in the first half with 13 points, constantly finding holes in Pitt’s porous defense and attacking the rim at every opportunity.

The Panthers’ dynamic duo of Artis and Michael Young were practically nonexistent in the first half, as neither of the seniors were able to get in a rhythm. With the lack of production from the usual offensive catalysts, senior forward Sheldon Jeter provided more than half of Pitt’s scoring output with 12 points and seven rebounds in the first half.

Jeter singlehandedly kept the Panthers alive through the end of the first half, but even he couldn’t get everything to go his way.

With 2:38 left in the half, Young threw a bounce pass into the paint to Jeter with no one around him. Jeter planted both feet and went up for the easy dunk, but the ball hit the inside of the rim and bounced right back out.

The missed dunk seemed to encapsulate the first 20 minutes for Pitt, and the first half ended with Syracuse leading 42-21.

The Panthers came out of the break with a purpose to make up some ground. Artis pulled up for a pair of quick threes, and for a few minutes in the second half, Pitt started to resemble the team that dropped 88 points on Virginia last time out.

But the Orange refused to let the Panthers claw back, as Gillon and fellow senior Andrew White kept the offense alive and had an answer for every run Pitt tried to mount.

Just as Pitt was starting to make a comeback the middle of the second half, White tipped out an offensive rebound right into Gillon’s hands and, without hesitating, the senior guard nailed a three to push Syracuse’s lead back to 20.

The teams continued to trade points after Gillon’s dagger and the Panthers slowly crept back into the game, but couldn’t quite cut the deficit to single digits. Pitt shot 35.1 percent from the field — its worst field goal percentage this season — while the Orange shot 51.9 percent to secure the 77-66 victory.

Things won’t get any easier for the Panthers next time out, as they head to Louisville, Kentucky, to take on the No. 9 Louisville Cardinals at 7 p.m. Wednesday, Jan. 11.