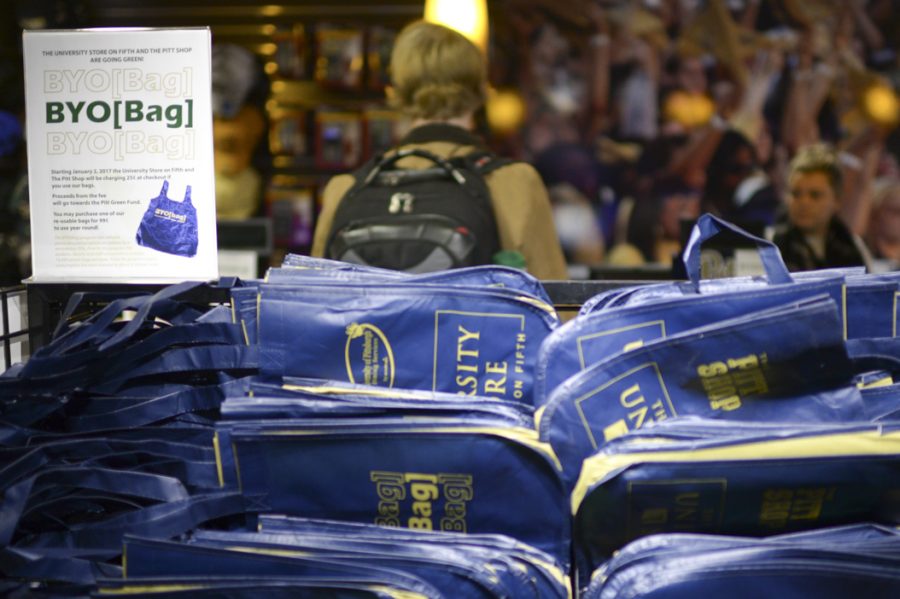 The University Store on Fifth's bag policy is displayed next to reusable bags, which cost 99 cents. Wenhao Wu|Senior Staff Photographer

The term “BYOB” is taking on a different meaning at Pitt.

Taking the lead from environmental movements across the country and state, Pitt’s students, faculty and administration are trying to make “Bring Your Own Bag” the newest trend on campus.

Over the past two years, several different student groups at Pitt have taken steps to make plastic bags disappear, encouraging campus buildings and vendors to use reusable bags instead. The University Bookstore on Fifth and the Pitt Shop on Forbes are the most recent locations to do away with plastic.

The campus bookstore, located under Holland Hall, implemented a new BYOB policy on Jan. 2, right before the start of the spring semester.

Students who have visited the bookstore over the add/drop period to purchase books and supplies for classes were offered a few options upon making a purchase.

Customers can buy a reusable bag for 99 cents, pay 25 cents for a white University Bookstore on Fifth plastic bag or forego a bag all together and carry their purchases.

According to Judy McDonough-Opel, the operating manager at the bookstore, half the money made from the sale of bags at the bookstore will go toward the Pitt Green Fund — a nine-member student board at Pitt that financially supports student-initiated projects and programs related to sustainability on campus.

Most students waiting in line for books on Monday evening did not know about the initiative until the cashier presented them with the new options.

Nadine Humphrey, a first-year engineering student, waited in line with an over 1,000-page physics textbook as she approached the counter. Hefting what already appeared to be a weighty bookbag on her shoulders, she realized she would soon be trying cram another book into the pack.

“As much as this initiative is probably good for the environment, there’s no way I’m coughing up an extra quarter,” Humphrey said. “I’m just going to carry it up the hill to my dorm.”

The bookstores on campus aren’t pioneers in the movement to reduce plastic. Ward Allebach, an adjunct professor for environmental studies, remembers a  2008 eco-art show at the University that displayed collected plastic bags as art on the walls of the William Pitt Union.

One of Allebach’s students, Jess McDonald, introduced the BYOB initiative to Sodexo in fall 2014 during her time as sustainability coordinator for Pitt’s dining services.

Initially, dining services including Market Central’s Quick Zone, allowed students a 15-free-bags quota per semester. The Student Government Board partnered with Sodexo in September 2015 to change the plastic bag fee to 25 cents.

“The program has saved thousands, if not millions, of plastic bags over the years,” Allebach said. “People don’t realize how much effort goes into making a bag, and it is quite pointless to use one bag for something as little as a pack of gum, which you could put in your pocket.”

According to Erika Ninos, Pitt’s sustainability program coordinator, there are several ways to implement and find funding or support to bring new initiatives to fruition at Pitt.

Starting on Jan. 10, the Office of Sustainability will be hosting Sustainable Solutions 2017. The program is a month-long competition, extending until Feb. 7, that encourages groups of students to present their ideas about campus sustainability initiatives to a group of judges. The winners will receive $10,000 to help finance their project

In addition to the efforts to reduce plastic bag use on Pitt’s campus, Pennsylvania Sen. Daylin Leach will reintroduce legislation for the 2017-18 session that would require a plastic bag fee throughout the Commonwealth.

According to Steve Hoenstine, spokesperson for Leach, the bill will suggest a two-cents-per-plastic-bag policy at stores that gross an excess of more than $1 million during the previous tax year. Leach is suggesting that 50 percent of the money collected from the bag fee be returned to the stores for use in improving their recycling practices, while the other 50 percent would go toward recycling practices in the commonwealth.

Ninos said Pitt’s proactive approach to becoming a more sustainable campus is largely because the students are pushing for it.

“A lot of these efforts are student-driven,” Ninos said. “And, while the new projects cannot be revealed yet, Pitt is striving to continue to spread sustainability on all parts of campus.”