Pitino’s praise for Artis not as crazy as it sounds 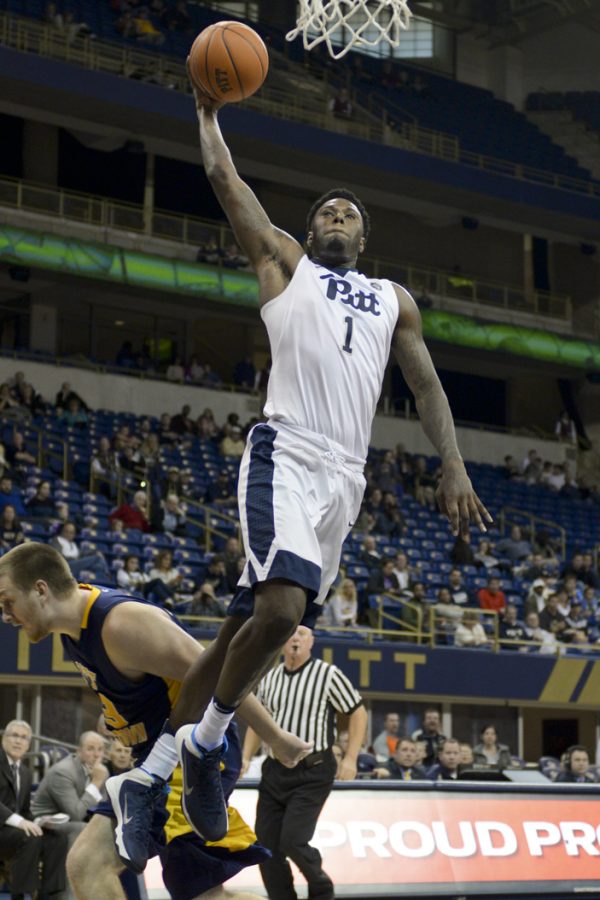 Moments after his No. 14 Cardinals overcame Pitt senior point guard Jamel Artis’ 43-point effort and beat the Panthers 85-80 Wednesday night, Pitino compared Artis to one of the best players in the NBA.

“He was putting on a Steph Curry performance,” Pitino said about Artis at his postgame press conference, referring to the NBA’s two-time defending Most Valuable Player.

Yes, that’s the same Steph Curry who made an NBA-record 402 3-pointers in the 2015-16 season, shattering the record of 286 set the year before by, you guessed it, Steph Curry.

Before the season, hearing the 6-foot-7 Artis even mentioned in the same sentence as the 6-foot-3 Curry would have been almost unimaginable — much less hearing a direct comparison from one of the greatest college basketball coaches of all-time.

Artis had a successful first three years at Pitt, earning second-team All-ACC honors as a sophomore while leading the Panthers in scoring with 13.6 points per game, then raising that average to 14.4 as a junior. But he was known more for his ability to shoot mid-range jumpers and drive to the hoop than his ability to splash threes from all over the court a la Curry.

In his first season, Artis only took 27 3-pointers, making eight of them for a measly percentage of 29.6. As a sophomore, he raised that clip nearly 10 full points to 39.4 percent, making 39-of-99 attempts from long range. His percentage dipped to 36.3 as a junior, but he made a career-best 49 threes on 135 attempts.

Not bad, but not even in the same stratosphere as what Curry was doing in the NBA.

This season, though, has been a different story for Artis — and that’s before his career-best performance Wednesday night.

He entered the game leading the ACC in 3-point percentage, shooting an impeccable 45.7 percent. Just for reference, Curry’s career-high is 45.5 percent at the NBA level. Artis also came into the game averaging 21.5 points per game, second only to teammate Michael Young’s 22.3.

By the end of the game, Artis had obliterated his career high of 32 points and soared past Young to take the conference lead at 22.8 points per game. Let’s run past some of the milestones Artis accomplished on his historic night:

His 43 points were the second-most in the 112-year history of the Pitt men’s basketball team, only two away from tying Don Hennon’s school-record 45 points against Duke set in 1957. It was the Panthers’ first 40-point game since Jason Maile scored 40 against Villanova on Feb. 12, 1997.
The 43 points were the most scored by an ACC player since Boston College’s Tyrese Rice scored 46 against North Carolina on March 1, 2008, and the most against the Cardinals since American’s Joel Curbelo scored 47 against them on Nov. 24, 1995.
Most impressive of all, Artis scored a program-record 32 of his 43 points in the second half — matching his previous single-game career high in the final 20 minutes of play.

That means he’s already tied his career-high with 49 made 3-pointers on the season on only 105 attempts — and the season is barely halfway over. His league-best 3-point percentage now sits at a pristine 46.7 percent.

So yes, the comparison may have sounded crazy at the beginning of the season, when all the talk was about Artis making the switch from forward to point guard. Surely no one imagined Artis would be the NCAA’s answer to Curry at the position, but the truth is, he’s been playing like it all season.

Wednesday night, he made everyone take notice — no one moreso than Pitino.

“Give a lot of credit to Jamel Artis,” Pitino said. “He is a terrific basketball player.”