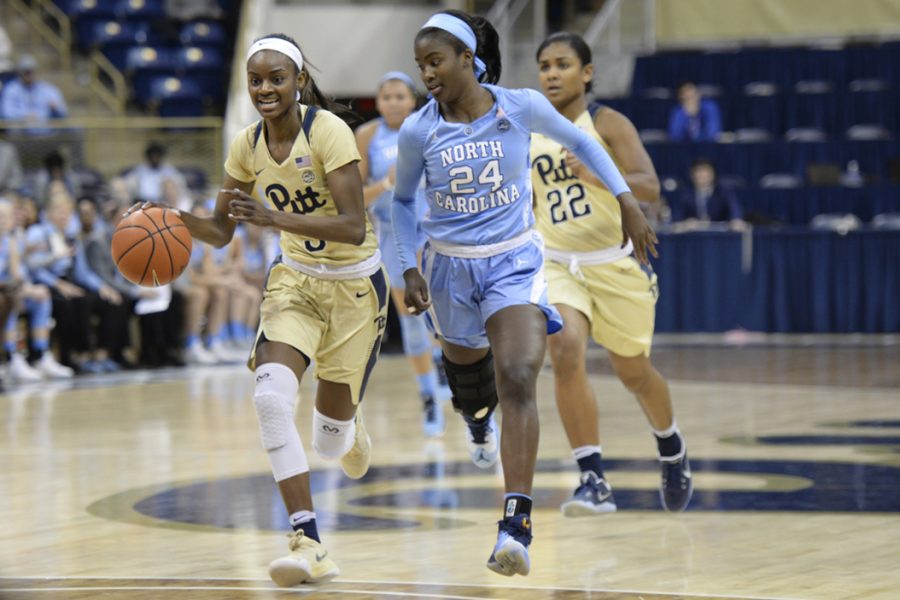 The Pitt women’s basketball team has owned its series with the conference rival North Carolina Tar Heels since moving to the ACC. Sunday afternoon was no different.

Following a pair of road losses against top-ten opponents, the Panthers (11-7 overall, 2-3 ACC) returned home and dominated the Tar Heels (12-6 overall, 1-4 ACC) at the Petersen Events Center, 68-48. The win is Pitt’s fourth consecutive victory against UNC and fifth in six meetings since joining the ACC.

“We were upset about the [losses], but we were focused on ourselves and getting better as a team,” Pitt true freshman guard Alayna Gribble said.

Sophomore forward Kauai Bradley finished with a game-high 17 points and 10 rebounds to notch the second double-double of her career and carry the Panthers to their second conference win of the 2016-17 season.

“We executed more. We were more effective, and we just took our time and played confidently,” Bradley said. “I give all the credit to my teammates and coaches for having confidence in me and my teammates giving the ball to me.”

Although UNC started the game with the first points, Bradley quickly put Pitt ahead with a three. Graduate transfer center Brandi Harvey-Carr displayed her power for the Panthers under the basket, ripping down an offensive rebound and making a putback to make it 7-4.

The Tar Heels evened up the score with a 3-point shot from sophomore guard Stephanie Watts, then a free throw from junior guard Jamie Cherry gave UNC a one-point lead. After more than two minutes of play without score, Bradley spotted up outside for the 3-point line, making her second three of the night and returning the lead to Pitt, 10-8.

Panthers point guard Jasmine Whitney nailed her first basket of the game, quickly followed by two more points from sophomore forward Kalista Walters. Walters sunk the last basket of the quarter, leaving Pitt with a 16-10 lead over the Tar Heels.

The Panthers opened the second quarter determined to dominate from long range. Bradley and Gribble each put in a three before UNC called a timeout only two minutes into the quarter.

The Tar Heels decreased their deficit with a jumper and a layup, but Gribble and Wise answered with a jumper from each to make it 29-14.

Following a blocked UNC shot, Harvey-Carr positioned herself for a layup and added two points to Pitt’s lead. Panthers junior guard Aysia Bugg secured her first points of the afternoon with a layup, followed by a jumper from Whitney.

Pitt ended the first half in complete control of the game, holding a decisive 35-16 advantage. Bradley dominated the scoring with 11 points at the half — three of her baskets coming from beyond the arc.

“Going into this game, we knew that North Carolina was very dangerous on the perimeter with Stephanie Watts, Destinee Walker and Jamie Cherry, just the way they come off on-ball screens, the range they have from the three-point line,” Pitt head coach Suzie McConnell-Serio said. “We had to be well-aware of where they were at all times and how we were going to defend them.”

Cherry opened up a hole in the Panthers’ defense to start the third quarter, nailing a jumper to tally the first points of the half. But graduate transfer forward Destinie Gibbs and Bradley responded with two points each to extend Pitt’s lead.

UNC started to find openings in the Panthers’ defense while shutting down their offense, cutting the deficit from 20 to 10 with a 10-0 run.

After almost five minutes without a Pitt basket, Gibbs broke the dry spell and drained a jumper from just outside the paint. Gribble followed Gibbs’ lead and put up another basket, this time a triple, to make it 45-30.

Gribble continued to fire away from long range, putting in her third 3-pointer of the game to make it a 48-32 Panthers lead. Wise then put up a pair of free throws, and Whitney followed by drawing a foul on her layup and finishing the 3-point play, giving Pitt a 53-33 lead entering the final quarter.

The Panthers faced a full-court press from UNC in the fourth quarter, but managed to find the perfect opening for a layup from Bradley, who later finished off her double-double by grabbing an offensive rebound with 3:18 left in the game. She led all scorers and rebounders in Pitt’s impressive 68-48 win.

“I said, ‘You need to make it impossible for me to take you off the floor,’” McConnell-Serio said about Bradley after the game. “Kauai was having a great game. She was rebounding, she was hitting shots, she was making plays … she’s someone that we’ve talked about how she can impact our team offensively and defensively, and when she plays like that you can expect those minutes.”

The Panthers will next host the Virginia Cavaliers Sunday, Jan. 22, with tipoff at the Pete set for 12:30 p.m.