Pitt gymnastics conquers No. 21 WVU for first time in 26 years 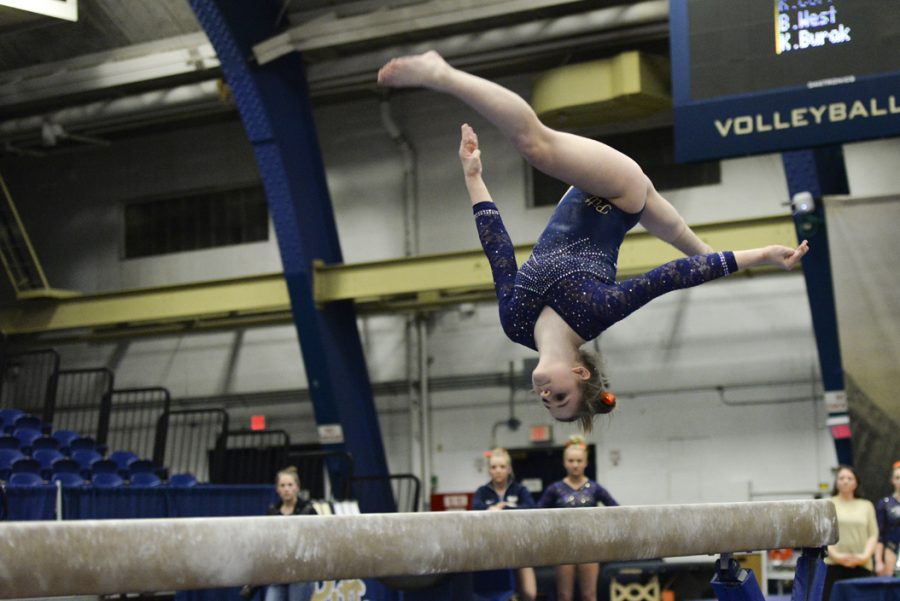 Pitt first-year gymnast Lucy Jones posted a score of 9.575 on the beam in the Panthers' win over No. 21 West Virginia. Jeff Ahearn | Senior Staff Photographer

Pitt gymnastics head coach Debbie Yohman knows her team has struggled on the beam, so she decided to try something new at practice this week.

“We got [into the Fitzgerald Field House] and I said, ‘Warm up, and then we’re doing a beam inter-squad. We’re just doing a whole lineup of full beam routines,’” Yohman said. “And they hit.”

The beam is Pitt’s weakest event, and the team’s struggles there allowed Ohio State to eke out a narrow victory in the Panthers’ season opener last Saturday. So Yohman organized the surprise inter-squad scrimmage on Thursday to prepare her team for its second match of the season against the No. 21 West Virginia Mountaineers.

Yohman’s strategy paid off, as a pair of Panthers — Kelly Burak and Brittany West — tied for first in the beam competition with WVU’s Carly Galpin. All three posted scores of 9.825, and Pitt bounced back from the Ohio State setback to defeat the rival Mountaineers Friday night for the first time in 26 years, 194.025-193.875.

Senior Tracy Pearson, who captured both the floor and the all-around title on Friday, believes the inter-squad competition helped the Panthers prepare for the intensity of Friday’s match.

“Overall, we did a great job because we had our inter-squad [scrimmage],” Pearson said. “It put us in perspective and it gave us that pressure so we knew what to expect, so coming out here would be a little easier.”

The dual meet at the Fitzgerald Field House was the 70th meeting between the regional rivals for the gymnastic rendition of the Backyard Brawl. Historically, the Mountaineers have dominated their competitions against the Panthers, amassing a 57-12 advantage in the all-time series.

But history was not a good predictor Friday, and Pitt snapped a 51-match losing streak against WVU dating all the way back to 1991.

The Mountaineers spotted the Panthers an early advantage by stumbling in the meet’s first rotation on the bars. Although Tiara Wright performed a brilliant routine for WVU that garnered a 9.8 score from the judges, the Mountaineers were hampered by an 8.975 from Chloe Cluchey and a 9.1 from Kassidy Cumber.

Meanwhile, Pitt first-year gymnast Rachel Dugan’s 9.85 on the bars was good for an individual title and a personal-best performance. Dugan said neither the pressure of the meet nor her desire to capitalize on the Mountaineers’ poor performance on the bars affected her mentality as she prepared for her routine.

“Honestly, I wasn’t even aware of the scores,” Dugan said. “We really do a good job of staying within the team. I always have the same mindset going up regardless of what the other team is doing.”

Yohman, meanwhile, was prepared for WVU’s ability to come from behind, so she stressed the importance of staying focused.

“Well, I know [the Mountaineers are] big vaulters, so I know they’re going to catch up,” Yohman said about her thought process early on. “And we don’t have an inch to spare, so I know that we just have to keep going.”

Yohman was right. WVU mounted a valiant comeback effort, climbing back within reach by outscoring Pitt on the vault. With the outcome still hanging in the balance, the meet came down to the very last individual performance of the day — Pearson’s floor exercise.

“I didn’t have to worry about Tracy [Pearson] worrying about what the score was,” Yohman said. “Tracy just goes out and competes. And she goes out and hits.”

Pearson dazzled with a 9.875 that gave her a share of first place on the floor, won her the all-around competition and handed her team the victory.

But the Panthers weren’t just competing for themselves Friday night. This year, the team “adopted” a local four-year-old girl named Madelina — who has a brain tumor — through the organization Friends of Jaclyn.

All the gymnasts came into the Fitz wearing shirts saying “Keep Calm and Fight On for Madelina” and orange hair ribbons in her honor.

“My team members are mentors to her,” Yohman said.

After Pitt clinched the victory, Madelina could be seen happily running around the gymnastics equipment with her own orange ribbon in her hair. After considerable effort, the coaches were able to corral her into a team photo.

The Panthers hope to carry their momentum from Friday night’s groundbreaking win into their next competition, a tri-meet against New Hampshire and Southern Connecticut. The meet will take place Saturday, Jan. 21, at 4 p.m. in Durham, New Hampshire.