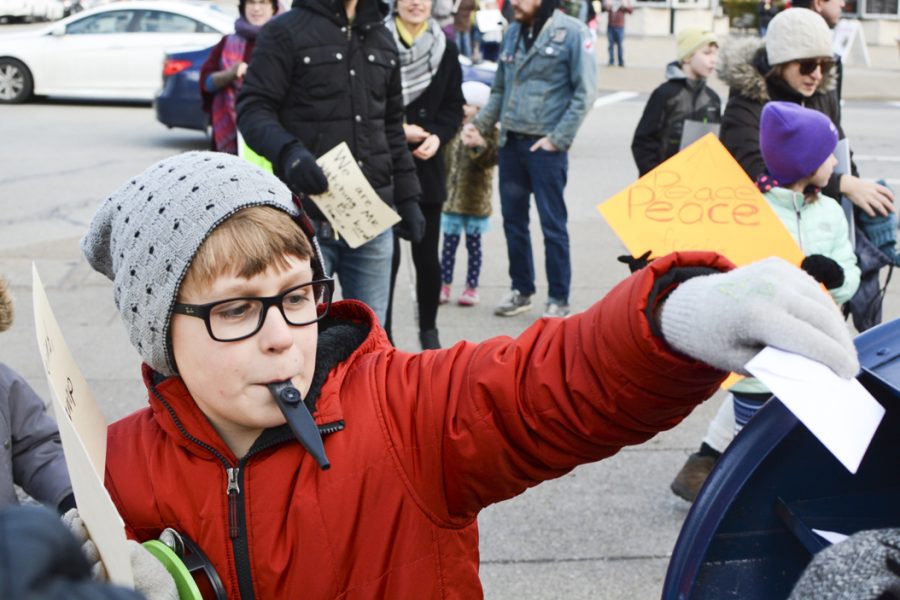 Henry Wagler, 9, puts a letter to President-elect Donald Trump into a mailbox at the corner of Forbes and Bigelow during the Pittsburgh Children's March for Peace and Kindess Sunday in Schenley Plaza. Stephen Caruso | Online Visual Editor

Eleven-year-old Clara Swanson was hunched over a park table with her baby sibling Benny sitting comfortably in a carrier on her back Sunday afternoon. She was carefully penning a letter to President-elect Donald Trump, asking him to understand that he controls the United States’ “success and reputation.”

Swanson was one of many children writing to Trump this past Sunday at Schenley Plaza, where a crowd of about 50 people gathered. Her mother Caren Swanson helped organize the day’s event: the Pittsburgh Children’s March for Peace and Kindness.

Backdropped by the sound of a folk band, children wrote letters and designed posters before beginning a roughly 10-minute march that started underneath the tent at the Schenley Plaza and circled around the central lawn. The children dropped their letters, addressed to the White House, into a mailbox outside Hillman library before returning to the tent.

The event-planners came up with the mini march at The Thomas Merton Center’s annual awards dinner two months ago, just after the presidential election. Swanson and Paola Scommegna — of Swissvale and Highland Park, respectively — weren’t sure how to react to Trump’s victory.

The two were among many other progressive activists at the dinner who listened to anti-war activist and writer Frida Berrigan describe her tearful experience explaining the election results to her children.

Swanson and Scommegna, who are both mothers, immediately empathized with Berrigan. The women began talking about the difficulty of imparting their values to their children when those ideals are at odds with the president’s actions.

“How do you communicate what you stand for when our president-elect has said vile things about women and very mean-spirited things about immigrants, and has even imitated a disabled person?” Scommegna said.

So with the help of a third socially-conscious mom, Carol Gonzalez of the North Side, the three decided to create and host the Pittsburgh Children’s March for Peace and Kindness, which they advertised to others on Facebook.

“They’re long, they’re at awkward times of day … they have big crowds and are cold,” Scommegna said. “This is specifically for kids.”

Gonzalez, whose children are in their 30s, said the day was geared toward families with younger children who haven’t yet experienced social action.

“My kids were definitely raised in the peace movement and were used to coming together to express their values,” Gonzalez said.

Mimicking a tiny peace movement of their own, children sat scattered among the ground and the few open tables in the plaza, scribbling their ideas on posterboard. Signs read, “If you can’t be kind, be quiet,” “Pittsburgh for Peace” and “Peace, Freedom, don’t give up, fight for it!”

Clara Swanson was an outspoken leader among the children that day. She held up her letter and said loud enough for other children to hear, “If our letters show respect, he might actually read them.”

Celishia Rent, of Brookline brought her kids to the event because she wanted them to have a glimpse of activism before heading to Washington, D.C. for the inauguration.

“When I was growing up, sure I knew about elections, but I didn’t care, now look where we are,” Rent said. “It’s a horror show, no one is getting along.”

Eight-year-old Metta Loyd, who pointed out that her name means “loving-kindness” in Pali, an Indic language used to study ancient Buddhist texts, was sticking her rainbow sign high into the air along with her younger siblings when she said the event was about “sharing your emotions.”

The kid-focused band, given that it was Martin Luther King Jr. weekend, began singing to the tune of “Row, Row, Row your Boat.”

“Peace peace peace and love / Sweet equality / These were Martin Luther King’s / Dreams for you and me.”

Swanson, cleaning up leftover craft materials, ended the day with a hopeful vision for the next generation.

“Children can lead the way in teaching us grown-ups how to be kind and how to be good neighbors and how to play with people who may be different from us,” Swanson said.