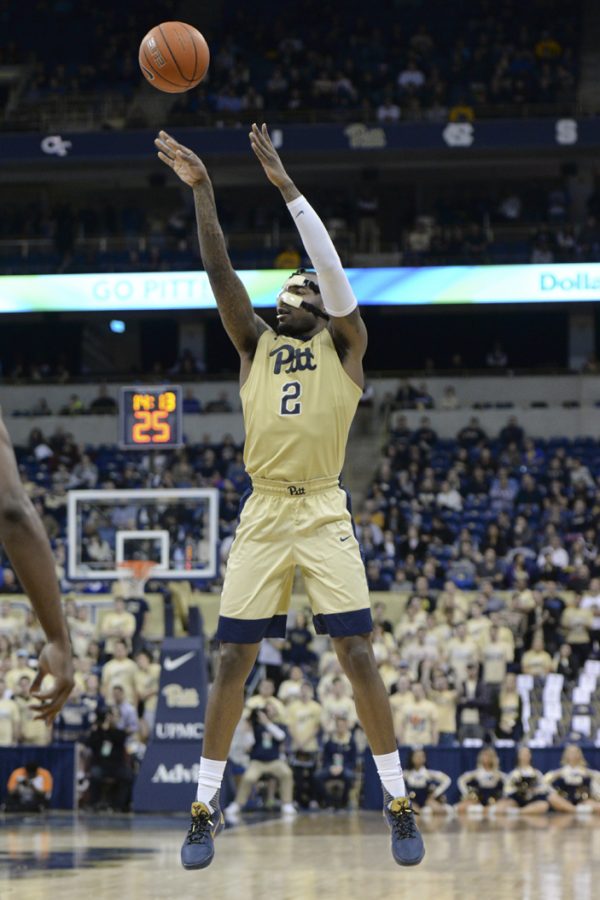 Although the Pitt men’s basketball team received a strong performance by Michael Young, it wasn’t enough for the Panthers Tuesday night. In a close game, the Panthers fell to the North Carolina State Wolfpack in Raleigh, 79-74.

Pitt’s senior forward Young rebounded from the worst game of his college career with a solid performance against the Wolfpack (13-6 overall, 2-4 ACC) to score a game-high 25 points. However, his efforts were insufficient as the Panthers faltered late and fell to 12-7 overall and 1-5 in ACC play.

One game after going 0-for-10 from the field in Pitt’s 72-46 loss to Miami, Young shot 9-for-19 while wearing a clear protective mask to replace the old-school goalie-style mask he wore Saturday. Young wears the facemask as he is playing through a fractured orbital bone.

Each team shot poorly in the opening minutes of the game, starting a combined 3-for-14 from the field. At the first media timeout, the score was tied at four apiece.

NC State grabbed a lead out of the break, going up 15-7 on a breakaway dunk by true freshman Dennis Smith Jr. Meanwhile, the Panthers continued to struggle with shooting, as the team only made one shot in the first eight minutes of play.

But Pitt clawed back, making two three-point shots in a 13-5 run over the next three and a half minutes to tie the game at 20.

The Panthers’ surge continued, and the team took its first lead since the 16:34 mark on a three-pointer by Young. The Wolfpack responded, going on an 8-0 run to retake the lead, 31-25.

Pitt closed the gap before the end of the half, but NC State took a one-point advantage into the break, leading 35-34.

Young led the Panthers in the first half, bouncing back from his poor performance against Miami by putting up 12 points in the opening 20 minutes. The only other player in double figures by the intermission was NC State guard Terry Henderson, who led the Wolfpack with 11 points.

After the slow start to the first half, both teams came out of the break hot, combining to shoot 16-for-19 from the floor. Young took charge for Pitt, scoring nine points in the first six minutes of the half. With 14 minutes to go in the game, NC State held a two-point advantage.

Pitt’s offense turned cold in the last few minutes, going without a single basket in the last 4:47 of the game. The Panthers had a chance to tie the game late after a turnover by Smith with less than 10 seconds left, but sophomore guard Cameron Johnson missed a 3-pointer. NC State was able to seal the win with two free throws, leaving PNC Arena with a final score of 79-74.

One area of concern throughout the game for the Panthers was offensive rebounding, where the Wolfpack had an 18-6 advantage. In total, NC State outrebounded Pitt 44-30, outscoring the Panthers 9-4 on second-chance points.

Pitt had its moments on defense, holding the dynamic point guard Smith to a season-low 11 points. But the team couldn’t contain Maverick Rowan or Terry Henderson, who each scored 21 points and combined for 10 3-pointers.

This loss is devastating for the Panthers, who have now dropped four straight ACC games and sit at 1-5 in conference play. The team’s NCAA tournament hopes look grim, as the Panthers likely need to win seven or eight of their last 12 games against daunting competition to make the cut.

The Panthers will return to play on Tuesday when they host the Louisville Cardinals at 7 p.m at the Petersen Events Center. The team will be out for revenge against the the Cardinals, who defeated Pitt 85-80 on Jan. 11.