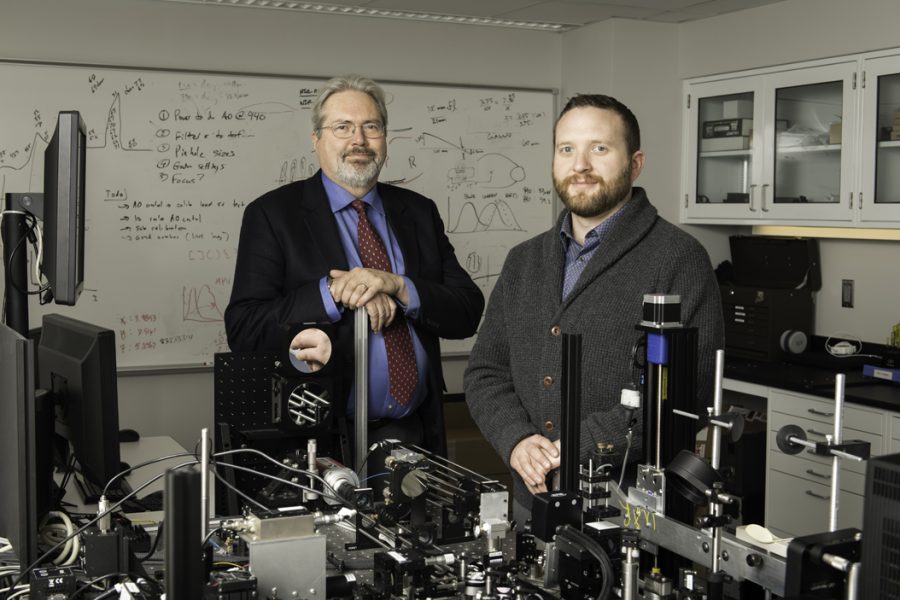 With a few pictures, eye disease patients may get more focused help than before, according to a new study.

Researchers at both Pitt and the University of Rochester Medical Center have developed a new technique for photographing the human eye that allows them to view cells that have never been seen before.

The research team published their paper outlining their new method for taking digital photographs of individual cells in the human eye this January in the Proceedings of the National Academy of Sciences. The cells — retinal ganglion cells, or RGCs — are transparent cells in the human eye whose degeneration causes vision impairment in glaucoma patients. Glaucoma is a group of diseases that affect the optic nerve, often causing pain and vision loss.

The research team is led jointly by David Williams, the dean for Research in Arts, Sciences and Engineers at the University of Rochester, and Ethan Rossi, an assistant professor of ophthalmology at Pitt’s School of Medicine. Rossi worked on the Rochester team as part of his post-doctoral studies and is continuing research at Pitt to provide quicker and clearer analysis of blinding eye diseases like glaucoma.

“As a researcher at the University of Rochester, Ethan Rossi has achieved a goal my laboratory and others have been trying to achieve for more than two decades,” Williams said.
His new method to resolve the transparent cells of the retina in the living eye is groundbreaking for future studies of normal retina and blinding eye diseases such as glaucoma.

The researchers tested their new method on monkeys as well as people without glaucoma. Yet, Rossi said his future research lies in studying humans with glaucoma. He wants to first build a multi-camera setup, which will allow him to take many photos at once without having to move the camera around.

“We want to slow down those [RGC] cells or halt progression,” Rossi said. “The hope is to have a tool to detect diseases like glaucoma earlier, then use it as a tool to monitor whether treatments are working.”

Rossi said even though the eye is an incredibly impressive organ, it is imperfect — unlike a telescope or microscope, which are engineered to focus light at extremely precise levels.

“Even if you have good vision, no glasses, you still have these imperfections that limit resolution,” Rossi said.

Those imperfections partly arise from neurons in the eye that get in the way of light as it attempts to pass through the retina. While the neurons are transparent, they are not perfectly smooth, like a lens might be.

Rossi’s solution was to measure this distortion from many different angles from the side of the eye. This way, he would combine the photos of scattered light into one coherent image.

It’s difficult to photograph these elusive cells because they are transparent, according to Rossi. The cells naturally evolved to be transparent because light has to reach all the way to the back portion of the eye, which allows the brain to process changes in color, as well as changes in light and dark.

For years, the approach to this problem was avoiding imaging altogether. Instead, researchers would measure the changing thickness of a glaucoma patient’s retina to determine the breakdown of the RGCs. Rossi said since humans only have about a million RGCs in each eye, they would probably begin to lose their vision before being able to measure this thinning, rendering the original method too insensitive to be useful in glaucoma diagnosis.

“You need several tens of thousands of cells to be lost before you can detect a statistically significant thinning of retina with [that] technique,” Rossi said.

Williams’ research has approached this problem by redesigning a digital photography technique called adaptive optics, where researchers shoot a laser into an imperfect optical system, such as the atmosphere. The laser then reflects or scatters back into a separate detector that can measure how the beam has changed. By using a flexible mirror, the researcher can then effectively “subtract” ーor take outー  that distortion and see clearly beyond the atmosphere. Charlie Granger, a Ph.D. student at the University of Rochester who was involved in the human-imaging portion of the study, said the team’s new method brings its own set of challenges.

For one, since the team’s method involves taking many photographs from the side of the eye, the images suffer from lack of light. Granger said the distance of the camera from the center of the eye was a central question throughout the study.

“The question was always, ‘how far out do we go?’” Granger said. “The farther out you go, the weaker the signal will be. So that’s one thing you have to fight.”

Although the team was not able to perfectly answer this question in this version of the study, Granger said he felt very positive about the fact that they were “opening the door” to other researchers and clinicians who may want to implement the technique.

“We say this with a lot of our experiments, but we hope it will become a clinical implementation,” Granger said. “It is a long road before it gets to that. But just for our success we’ve seen, it’s pretty promising.”