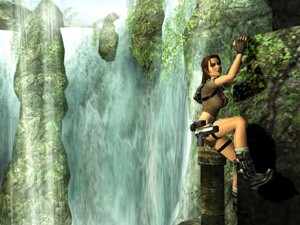 In light of the tragic shooting in Newtown, Conn., and the nearly 1,516 gun-related deaths since, the familiar conversation of violence in mass media, particularly video games, has once again garnered national attention. While this conversation usually follows a simple, circular path — Person A says video games cause violent behavior, Person B says video games do not cause violent behavior and then everyone, including Congress, decides to do nothing — there is a growing problem in video games that must be addressed.

There are three broad themes to most video games: The first has highly sexualized women dressed in little to no clothing, the second allows players to shoot a variety of non-white, often impoverished inhabitants of the developing world (“Call of Duty” refers to these people as terrorists) and the third is sports games. Oftentimes, these three categories combine successfully, as well.

Video games move fast these days. They leave you scant time to reflect on the trail of corpses you leave behind in locales such as a Brazilian favela (“Call of Duty 2”) or a Somalian ghetto (“Medal of Honor: Warfighter”). And when your crack team of Anglo-American special operators (plus one burly black man) carve a bloody swath through some godforsaken den of terrorists in [insert any third-world country], your team flies away on a helicopter blaring “God Bless America” with nary a thought for the damage wrought — a common motif in most modern military shooters.

As Ben “Yahtzee” Croshaw, an Australian-based video game critic, said about the latest modern military shooter, “Medal of Honor: Warfighter,” in a YouTube review, “The story keeps dumping me in one location or another and tells me to shoot all of the brown people speaking foreign.”

Of course, it’s impossible to fathom that the illiterate, impoverished masses are capable of challenging the U.S. military in a serious way. That’s why games like “Call of Duty” keep the racial genocide to the opening levels. Every good game needs a more sophisticated main villain, a role which Russia, in the minds of game designers, is uniquely suited for. Despite the fall of the Berlin Wall, the Red Scare has not ended, at least not in many military-based video games.

While the modern “realistic” war shooter is a recently horrifying trend, this all says nothing of the entire video game industry’s failure to solve the issue of sexism. Women, if included at all in a game, are sex objects more often than not. As evidenced by the disembodied titillation of Cortana in the “Halo” series or the main-character breasts of Lara Croft in the “Tomb Raider” series, women have not advanced much in video games.

This is particularly shocking, since women started off on relatively level footing. Samus in the “Metroid” games, which first appeared in 1987, is the greatest heroine in gaming history. She remains in armor for most of the game, hiding her gender until the end. Even today, the reveal of Samus’ body outside of her armor is as surprising and memorable as it was in 1987.

Lara Croft ruined all of that, though. And now, with a reboot of the “Tomb Raider” series being released in March, it seems Lara will get back to work soon enough. The new developers of the reboot have been careful to avoid the normal pitfalls of Lara Croft — the comically skinny waist, large breasts and exposed midriff — that plagued the original games.

But “Tomb Raider” set a tone in video games that has yet to be undone.

Video games are violent, and we should discuss that as an issue relevant to popular culture. But more problematic is the steady growth of racist and sexist undertones into fully-blossomed, well-written overtures. Violent video games are certainly a societal issue, but the racist and sexist undertones in gaming affect society more frequently because they reinforce ignorance.

Of course game designers are making this sort of game for a reason: Consumers buy them. If change will ever happen, consumers must demand it — and they probably won’t.

I won’t advocate the dissolution of these game series. After all, they are simply video games. But they are a cultural manifestation of a circular affirmation of American culture and foreign policy. It’s problematic that the nameless “bad guys” you haplessly gun down in games like “Call of Duty” are portrayed as more villainous than the American traversing the globe killing thousands and breaking all sorts of national sovereignty.

The video-game industry, players and designers, need self-control and self-reflection. If developers want to place a player in a hyper-violent fantasy world, as they often do, then they need to come up with a better excuse than some poor foreigner threatening Americans’ apple pie.