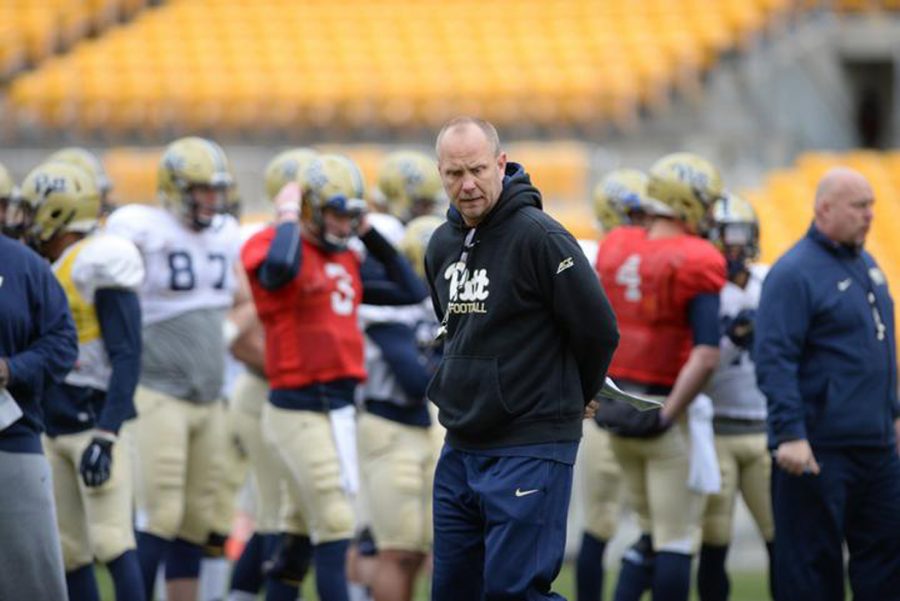 Matt Canada left Pitt after one season to take over as offensive coordinator at LSU. Jeff Ahearn | Senior Staff Photographer

It’s been three weeks since the Pitt football team’s season came to an end with a 31-24 loss to Northwestern in the Pinstripe Bowl, and there’s still no sign of who will be running the offense next year.

But there’s no need to panic. As the mastermind behind the 2016 team’s record-setting offense moves on, fans can rest assured knowing Pitt was bound to light up the scoreboard no matter who was calling the plays.

Matt Canada joined the Panthers as the team’s offensive coordinator and quarterbacks coach this past season and took the offense to unprecedented levels of success usually reserved for the very best teams in the country. Pitt put together its highest-scoring season of all time at 42.3 points per game and landed four offensive players on the All-ACC First Team.

Fans and the media have credited Canada for this immediate success — he even earned a nomination for the Broyles award recognizing the best coordinator in college football. Using this newfound acclaim to his advantage, Canada skipped town after one season in Pittsburgh to become offensive coordinator under head coach Ed Orgeron at SEC powerhouse LSU.

According to documents obtained by The Advocate, Canada will make $1.5 million per year at LSU — making him the third-highest-paid assistant coach in college football.

Losing Canada might seem like a major blow to the Panthers, and it is. But it doesn’t mark the end of Pitt’s offensive success — the Panthers were due for an offensive explosion with or without Canada.

To begin with, Canada inherited a fantastic and experienced group at offensive line.

The team returned four starters up front, including first-team All-ACC performers Dorian Johnson and Adam Bisnowaty, and added redshirt sophomore Alex Bookser to the mix at right guard. This group dominated, allowing only nine sacks on the season and earning semi-finalist honors for the Joe Moore Award recognizing the best offensive line the country.

The line provided the foundation for Pitt’s talented skill position players to have great seasons.

First-team All-ACC running back James Conner was set to return from his battle with leukemia and a torn ACL, while graduate transfer quarterback Nathan Peterman entered his second campaign with the Panthers. Cincinnati Bengals wide receiver Tyler Boyd stood as the team’s only major loss on offense.

Canada capitalized on all of these pieces to create the team’s high-powered offense. Peterman led the ACC with a 163.4 quarterback rating in a conference that included the Heisman Trophy winner and runner-up — quarterbacks Lamar Jackson of Louisville and Deshaun Watson of Clemson — along with a slew of other NFL-ready gunslingers.

The team finished third in the ACC in rushing, behind only Georgia Tech — a team that runs the triple option, meaning they attempt to run the ball on almost every play — and Louisville, whose quarterback, Jackson, contributed over 1,500 of those rushing yards himself.

Rushing behind one of the top offensive lines in the country while using two All-American playmakers wasn’t a sign of Canada’s coaching acumen — it was common sense.

As teams focused on the Panthers’ fierce rushing attack, it opened up easy passing opportunities for Peterman. While not the most prolific downfield passer, he was skilled enough to hit numerous big plays to junior receiver Jester Weah and senior tight end Scott Orndoff.

With Pitt’s mix of big maulers on the offensive line, dynamic talents at running back and receiver and an efficient signal caller running the show, Canada inherited an inevitable offensive outburst.

All this being said, Canada did a good job putting players in the right position to succeed. But no matter how many jet sweeps and end-arounds he called, the offense wouldn’t have been so successful without the strong core of returning players for the Panthers.

If Pitt’s offense flounders next year, it won’t be because of the loss of Canada — it will be the departure of a strong nucleus of players to the NFL that sets the team back.