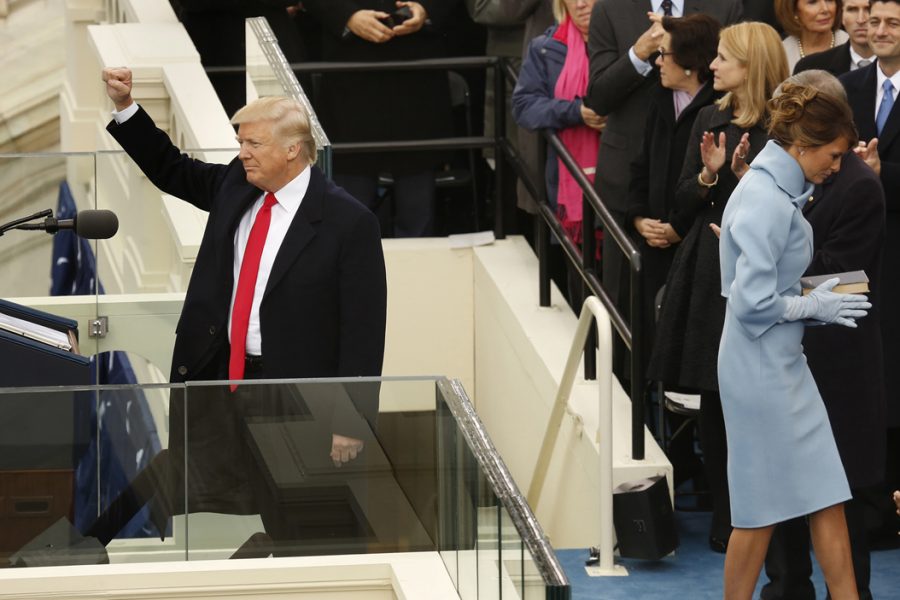 Donald Trump raises his fist before giving his inauguration speech just after being sworn in as the 45th President of the United States. Carolyn Cole/Los Angeles Times/TNS

In front of a crowd of roughly 200,000, Donald Trump took the nation’s most dutiful oath Friday, pledging to faithfully execute the Executive Office of the President for the good of, in his own words, the people.

And Saturday, the people took the streets laid out in front of the Capitol Building where he’d placed his hand on the Bible — and all over the world — to let him know they planned on holding him to that promise.

Near the Capitol, Friday

People started gathering in the National Mall in Washington, D.C., as early as 3 p.m. the day before Trump’s inauguration. By sunrise Friday, a few scattered protests were taking place in various parts of the downtown area as more supporters filled in the National Mall to watch Trump’s speech and performances by the Mormon Tabernacle Choir and Pittsburgh’s own Jackie Evancho, among others.

According to one officer on the scene, Metropolitan police had been on duty since 4 a.m. Friday morning working crowd control outside the Mall.

To watch the ceremony, attendees needed to either get a ticket from their senator or governor in advance, or enter through one of seven security gates to watch from the National Mall in the shadow of the Smithsonian museums.

Javier Pérez, an applied economics and management major from Cornell University, scored free tickets when visiting the Mississippi Senate office the day before. He was in the Court Square ticketed section of the Mall with his three friends.

He said security lines to get into the section were short and easy to navigate. While Pérez himself did not vote for Trump in the past presidential election, he enjoyed watching the inauguration in the midst of mostly Trump supporters.

“Many people live in bubbles of people who think and see the world just like they do,” Pérez said. “And I think it’s important to get and experience things from both perspectives.”

Beyond the gates, in various parts of the city, anarchist and anti-fascist groups led #DisruptJ20 protests to shut down streets and draw attention away from Trump’s ceremony.

Mikael Mattosian, a CMU graduate student, and Manjot Singh, a Coro fellow in Pittsburgh, were among some of the dissenters. They left for D.C. from Pittsburgh at 1 a.m. Friday to join the protest with the Answer — Act Now to Stop War and End Racism — Coalition.
Singh said he and his housemates bought a book called “How to Explain Trump to Kids” when Trump was still a candidate. He looked through it recently and couldn’t imagine telling his future children that he hadn’t done anything at the inauguration.
“D.C. seemed like less of an option and more of a duty,” Singh said.

As the morning progressed, the National Mall flooded with a sea of red “Make America Great Again” hats. By 10:30 a.m. Friday, vendors walked up and down the crowds selling pins and flags from Trump’s campaign cap to the assembling crowd.

Halfway down the Mall, at 7th Street, people became agitated with security forces who were stopping the crowds from crossing the street to get closer to the ceremony. Because protesters periodically shut down entrances to the Mall, confused attendees paced back and forth between different security officials, trying to find out how to get closer to the action.

Joe Iwasyk and Matthew Weiss, both first-year students at the University of Pennsylvania, decided they were coming to the inauguration a week ago with a school-sponsored trip. The men, who are conservative, said most of the students on the bus were protesters.
“I wouldn’t go around campus saying I’m a conservative,” Iwasyk said, echoing a sentiment that right-leaning students at Pitt expressed several times throughout the election season.
Weiss, who is in the Wharton School of Business, remembered anti-Trump actions on campus the day after the election. He understands people’s concerns but said he thinks many of them are unrealistic.
“It’s not going to be a stroke of a pen, [and Trump says] ‘I changed everything,’”  Weiss said.

Some of his policies are negative but I believe it’s [about] a restoring of traditional values.”

Trump was sworn in as America’s 45th president at about noon Friday in front of a calm group of onlookers and a few low-voltage protesters. He emphasized his “America first” vision on foreign policy and doubled down on his promise to be a law and order president.

“Protection will lead to great prosperity and strength. I will fight for you with every breath in my body and I will never ever let you down,” Trump said. “America will start winning again, winning like never before.”

The speech laid a blueprint for a presidency that couldn’t have come any sooner for Guido Kaiser.

The 52-year-old worked in management at an electronics manufacturer until the day before Trump’s inauguration, when he was laid off. He traveled from outside Philadelphia, driven by his hope that Trump’s plans for deregulation and improved trade practices will help manufacturing thrive in the United States again.

He added that he was tired of former President Barack Obama’s rhetoric, which he thought isolated Americans in separate “barrels” – such as LGBTQ+, African-American or immigrant.

“We’re all going to be Americans [now],” Kaiser said.

Around the city, Friday

Before the start of the presidential parade, which was delayed until about 3:30 p.m., fiery acts of dissent began cropping up in various parts of the city.

Some protesters, dressed in black with their faces covered by bandanas or helmets, smashed the windows of a Starbucks and a Bank of America along 13th Street on their way to the parade route. They turned back before reaching the route and confronted shielded riot police near 12th and K streets.

The police, who were on high alert for Inauguration Day, met protesters with force in some cases. But on 13th and K streets, police did not try to stop anyone from setting fire to newsstands or climbing on bus stops.

When a black Suburban with sirens drove through the group on 13th and K, protesters threw bricks at it, breaking the back window. A line of police clad in riot gear blocked off the south entrance of the intersection at 13th and K while another line of cops barricaded the east entrance and threw stun grenades.

On the west side of K street, dissenters smashed in the windows and graffitied the sides of two posh black vehicles, one a limo and the other an SUV. After climbing into the vandalized limo, one protester found water bottles and called out to say they were for the taking.

To the south, along Pennsylvania Avenue, a sparse crowd gathered to watch the inaugural procession, led by members of the Metropolitan police on motorcycles, and marching members of all four armed services. Trump whizzed by in his black car behind tinted windows.

Behind the parade, black smoke rose slowly into the gray sky after protesters lit fire to the limo with smashed windows.

In response to the fire, riot police advanced down K Street to 13th Street NW, pushing protesters back and using mace on a few. David “Leprechaun” Guthrie, 36, of South Bend, Indiana, who stripped off all of his clothes at the protest to show that at their core, humans are “all the same,” was hit with mace.

Guthrie squinted his face tightly to keep the thick layer of pepper spray on his face from dripping into his eyes. Other protestors screamed into the air for “medics” and within 30 seconds, Margaret Mary appeared, dressed in black, with a red cross taped on her shoulder.

Mary said she is part of a network of street medics who come to protests to make sure everyone is safe and healthy. She’s been at it for over six years.

“We help demonstrators with everything from heat stroke to panic attacks to pepper spray exposure,” Mary said.

Mary leaned in close to Guthrie to ask what attention he needed, poured water over his face to help soothe him and covered him in a space blanket.

“Thanks for taking care of us,” Guthrie said, before some came to scribble “fu** Trump” on his bare skin.

A few streets over, a liberal rally took over McPherson Square, complete with a giant blow-up elephant, live music and speakers including documentarian Michael Moore. The crowd was filled with smiling people of all ages, dancing to brass bands, playing with hoola hoops and laying out on the grass.

Between 4:30 and 6 p.m., the protesters had settled down. Metropolitan police reported 217 arrests total for the day, all for rioting.

There is the first part of a story series. The second part is called Hello, Trump: Women’s March on Washington, D.C.