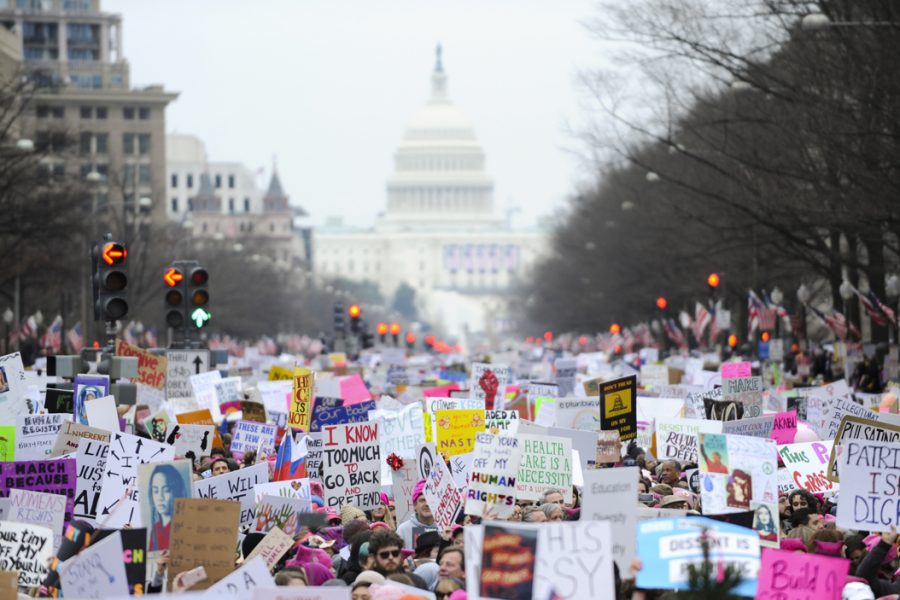 Marchers process from the capitol towards the White House. At least 500,000 people marched according to most estimates. John Hamilton | Visual Editor

This is a continuation of Hello, Trump: Inauguration Day in Washington, D.C.

Teresa Shook, from Hawaii, made a Facebook page for the Women’s March on Washington on election night. By the morning, 10,000 people had responded. By Jan. 21, millions had heeded the call to action, showing up in cities all over the world, including Chicago, D.C., Berlin and Pittsburgh.

In what would turn out to be the largest of many massive international actions against Trump’s policies and rhetoric, half a million people in pink-tipped “pussyhats” and hoisting handmade signs, gathered in the streets surrounding the National Mall.

More people joined Shook in organizing the march — nearly 20 in total — which made the planning process more intersectional in nature. By the big day, a lengthy list of speakers had signed on to rally the ever-growing crowd. Actress America Ferrera, feminist icons Gloria Steinem and Angela Davis, actor and documentarist Michael Moore and six-year-old immigrant and activist Sophie Cruz were among some of the speakers Saturday. Their speeches were dotted with performances from artists including Big Lovely, Alicia Keys and Janelle Monae.

“We are here and around the world for a deep democracy that says we will not be quiet, we will not be controlled, we will work for a world in which all countries are connected,” Steinem said. “God may be in the details, but the goddess is in connections. We are at one with each other, we are looking at each other, not up.”

The march’s official website cited “rhetoric of the past election cycle [that] has insulted, demonized and threatened many of us” as a driving force for the movement.
Newly-minted President Trump’s history of coarse statements regarding women reached its apex in October 2016 when a leaked “Access Hollywood” tape featured him describing how easily he can “grab [women] by the pussy.” In the months after, more than 10 women would come forward to accuse Trump of sexual assault.
Marchers made pink cat-eared “pussy hats” in reference to the recording, covering the National Mall in pink — a slight change in hue from the red “Make America Great Again” hats Friday.

Aisha Alexis, Rachel Petit-Hamme, Landrise Felix and Yaminah Watson are all friends from around New York. They drove to the protest together and were waiting in line at the D.C. Metro’s College Park station.

None of the four were worried that the march wouldn’t be inclusive to them as African-American woman. Such concerns sparked the formation of two separate marches in Pittsburgh.

“If everyone comes together, we’ll get the job done,” Felix said.

At College Park, the metro station’s manager said the crowd that passed through his turnstiles was one of the largest he’d ever seen in 25 years on the job, surpassed only by the Obama inaugurations. Metro ridership was eight times as much as any normal Saturday.

People marched for a variety of reasons. Husbands, fathers, sons and male-identifying members of the crowd held signs for the women in their lives. Parents marched for their children, many of whom rode along in strollers or atop parents’ shoulders holding their own signs.

Jeaneena Stefanski, from Connecticut, marched for people who rely on the Affordable Care Act, like she does.

Walking away from a jumbotron as Madonna issued a sincere “fu** you” to people who complained about the protest, Stefanski described her battle with stage four ovarian cancer. The cardiac nurse held a large white sign with “ACA treats my cancer” crudely painted in bold black letters. She relied on insurance to get her through chemotherapy, which ended in September, and now for her infusions — which she said cost more than $40,000 each.

“It’s scary, but I’m kind of assuming [the end of the ACA] is not going to happen in the next few months,” she said. “I’m [marching] for women who don’t have the option of going out and back into a professional workforce.”

The massive number of people marching made organization difficult. The planned route followed Independence Avenue SW to the White House, but marchers trailed off on a number of different routes.

Some were confused as they came to blocked roads and dead ends, but thousands eventually poured into the National Mall, circling the National Monument — where a woman dressed as the Wicked Witch of the West glided ominously up the hill — and corralling as close to the White House as was possible.

Jessica Sheng, a 23-year-old college grad working in D.C., was standing on the lawn of the Mall with her friends as the march came to a close.

All around her, people walked by in costumes and on stilts, holding signs with intricately drawn uteruses, Audre Lorde quotes, caricatures of Vladimir Putin and Trump and “Pussy grabs back” slogans. Marchers who were dispersing tucked their signs into the chainlink of the Smithsonian museum, making a historical exhibit in its own right.

A woman standing yards away from Sheng wore a black bandana around the bottom half of her face and sang “We Shall Overcome” through a megaphone.

“You definitely feel like you’re part of the future,” Sheng said.