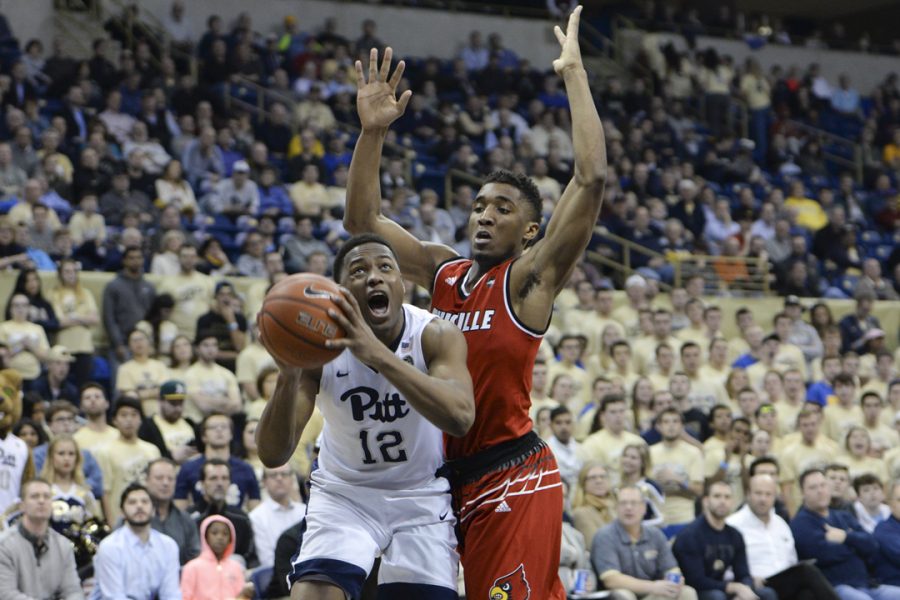 The Pitt men’s basketball team is making history for all the wrong reasons.

Just 10 days after suffering the worst loss in Petersen Events Center history — a 26-point defeat against the Miami Hurricanes — the Panthers shattered their own record in a 55-point home loss to the No. 13 Louisville Cardinals. Tuesday’s result is Pitt’s second-most lopsided loss in program history, fifth straight defeat this season and the tenth consecutive time the team has fallen to Louisville.

Stallings struggled to cope with his team’s poor performance and drew a double-technical foul for arguing a call, leading officials to eject him from the game with 14:24 left in the second half. Stallings refused to comment on why he was ejected after the game, citing his unfamiliarity with league policy.

“I don’t know what league policy is [in the ACC], so I’d better just refrain from saying too much so that I don’t violate anything,” Stallings said.

His anger is understandable, as the Panthers (12-8 overall, 1-6 ACC) looked uninspired throughout the game, shooting a measly 25.5 percent from the field. The defense was equally lackluster, as Rick Pitino’s Cardinals (17-5 overall, 5-3 ACC) reached a season high in points tonight in a 106-51 blowout.

After the game, Stallings called out his players’ lack of fortitude in the loss.

“I think one thing that this team has consistently shown is the inability to deal with adversity,” Stallings said. “I quite frankly don’t understand that. I don’t understand how you don’t dig in and compete harder.”

Pitt senior Jamel Artis scored the night’s first points with a jumper, but the Panthers struggled to score for the remainder of the game. Louisville quickly took advantage and jumped out to a 10-3 lead by the first media timeout.

The Cardinals continued to stretch their lead after the break, outscoring the Panthers 7-2 and taking a 17-5 lead. But after a layup by Pitt sophomore guard Cameron Johnson, Louisville’s offense stalled and did not score over the next 3:05.

The Panthers couldn’t take advantage, and Pitt was shooting an abysmal 21.4 percent midway through the first half. The Cardinals’ offensive lull inevitably ended, and they scored seven straight points over the next 1:04 to take a 24-7 lead.

The two teams traded buckets as Louisville’s advantage grew to 31-13, but the Cardinals kept piling on, going on a 6-0 run to stretch their lead to 24 with 3:30 to go in the half.

Senior guard Chris Jones ended the Panthers’ 0-for-13 shooting drought with 24 seconds left in the half with a layup, only the fourth field goal of the half, and a foul shot. But Louisville didn’t coast into the break, draining another three-pointer just before the buzzer to end the half with a whopping 33-point lead.

The first half was a one-sided affair, as the Cardinals shot a blistering 71.4 percent overall and 77.8 percent from three-point range. Conversely, the Panthers shot a measly 16 percent from the field and went 0-for-12 from beyond the arc.

Louisville guard Donovan Mitchell and center Anas Mahmoud led the Cardinals’ attack in the first half, chipping in 16 and 12 points, respectively. The 7-foot Mahmoud shot 6-for-6 from the field in the first half, as Pitt had no answer for his post moves in the paint.

Pitt’s leading first-half scorer was Jones with only six points.

The second half was more of the same as the Cardinals extended their lead to 39 on a three-point play by guard Deng Adel with 15:46 left. Pitt forward Sheldon Jeter fouled out 12 seconds later and finished the night with only two points.

Louisville continued its onslaught despite the Panthers doubling their first half shooting percentage. Over the next 10 minutes, the Cardinals outscored Pitt 31-16.

The sole source of excitement for Panthers fans in the second half was the insertion of reserve center Rozelle Nix, who entered the game late in the half. Nix, who often comes in at the end of hopeless games/, tallied four points and seven rebounds to the delight of the small remaining crowd over the final nine minutes of play.

The Cardinals cruised the rest of the way, as Pitt was simply no match, winning by a final score of 106-51. Louisville’s Hall of Fame coach said he’s seen games like this before, though not often at the college level.

“Well, this was one of those nights — I’ve experienced a lot of them in professional basketball — where everything goes right for one team and everything goes wrong for another team,” Pitino said.

This loss effectively ends any chance the Panthers had to earn an at-large bid to the NCAA tournament. The team will have to play near-flawless basketball the rest of the season to have any hope of making the cut. It appears their only hope now is to make an improbable run to the ACC Tournament championship.

Pitt will remain at home to take on its fellow ACC basement dweller, the Clemson Tigers — who also sit at 1-6 in the conference — this Saturday at noon.