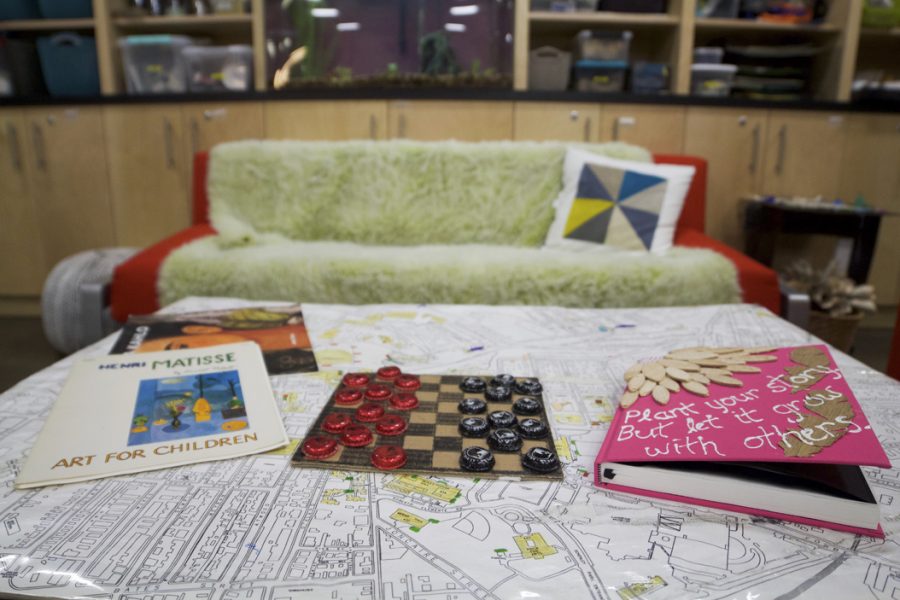 By Zoe Pawliczek / For The Pitt News

Nancy Kirkwood walked down to the basement of the University Bookstore on Fifth with overflowing bags of art supplies and began stocking a wall full of shelves. She does this every day as part of her job at the Center for Creativity.

She joined the Center last fall as a way to connect to her daughter, Tess Senay Raynovich, who passed away in 2012. The youngest of her three daughters, Raynovich, was killed in a car accident on October 28, 2012, when she was 20 years old. A lover of the arts, Raynovich spent her childhood experimenting and creating — mainly focused on combining natural and recycled resources to make eco-art.

“She was pretty nuts about our natural resources. That’s the direction she wanted to go with her art,” Kirkwood said.

When the funeral home couldn’t accommodate any more flowers, guests asked if they could donate money to the family instead. Kirkwood accepted their offers, soon accumulating enough donations to start the Tess Senay Raynovich Art and Earth Fund, which is used to sponsor multiple camps and projects devoted to getting children involved with eco-arts. The fund also awards a $1,000 yearly scholarship at Quaker Valley High School in Leetsdale, Pennsylvania, which Raynovich graduated from in 2010.

“We designed the fund around what she wanted to do rather than what she had done,” Kirkwood said.

With the help of one of Raynovich’s friends from college, Kirkwood created a website for the fund where they could sell prints of Raynovich’s art as a way to honor her memory.

Kirkwood’s work in the arts, however, did not end with setting up the fund. While working in the English department, Jeanne Marie Laskas, the Center’s founding director and Pitt’s Writing Program director, asked Kirkwood to assist her in operating the center.

Laskas had met Raynovich previously and knew of Kirkwood’s experience with the arts through the fund, so she invited Kirkwood to join the still-growing project.

She came up with the idea for the Center in 2011, but it became a reality last March. Laskas and Kit Ayars, the Center’s director for strategy and partnership, received support and funding from Pitt Provost Patricia E. Beeson to set up the space.

Drawn to the Center’s goals of promoting artistic experimentation, Kirkwood received the English department’s blessing to leave her position there and began working in the Center full-time last September, organizing weekly crafts and supplying materials for students faculty to repurpose into art.

The Center, which is open to all Pitt students, staff and faculty, welcomes both newcomers and professionals. Kirkwood’s own past is proof that nobody needs an extensive background in the visual arts to make use of the Center. Michael Campbell, a co-worker in the center, who has a degree in studio art, said it’s actually useful to have an untrained artist as part of their team.

“I don’t always have an amateur eye, so it’s nice to have Nancy. She keeps us grounded and keeps our space open to everybody,” Campbell said.

The Center’s Workshop Manager Erik Schuckers agrees. Schuckers said Kirkwood has an ability to connect with anyone and everyone who comes into the workshop.

“She meets everybody at whatever level they are, whether they’re a complete beginner or someone with a little more experience,” Schuckers said.

With Kirkwood’s minimal prior experience in the visual arts, Laskas and Ayars encouraged her to try new mediums and to contribute her own ideas to the Center, such as the recreative wall she can regularly be seen organizing.

The Center’s recreative wall, designated by the assorted scrap materials forming the word “Recreate” above shelves of recycled and repurposed art supplies, was inspired by Tess’ passion for eco-art. Kirkwood maintains the shelves, keeping them stocked through frequent visits to the Pittsburgh Center for Creative Reuse as well as from donations.

“People have gotten to know us and feel at home here, so they bring stuff,” Kirkwood said.

Kirkwood also brought in many of Tess’ art supplies and personal belongings left behind after her death. A green throw blanket which belonged to Tess is draped over a couch, next to a checkerboard scattered with Alaskan beer caps from Tess’ time spent in Alaska.

“There’s lots of things Tess hoped for, for herself and her family, and I think this is one thing that’s happened that she would be happy about,” Kirkwood said.

As their user base expands to include a larger variety of students, Kirkwood said the Center needs to expand to include resources such as a kiln, a dark room, soldering equipment or a gallery space to display visitors’ creations.

Kirkwood, however, has experience transforming a small idea into something larger. With four years of running Tess’ fund and over a year’s devotion to being part of the Center for Creativity, Kirkwood has no intention of abandoning the arts anytime soon.

“I’ve never spent a day creating and then felt really bad about having spent the day that way,” Kirkwood said. “And now, I get to do it for a job, so it’s awesome.”