Panthers riding momentum into Raleigh vs. No. 18 NC State 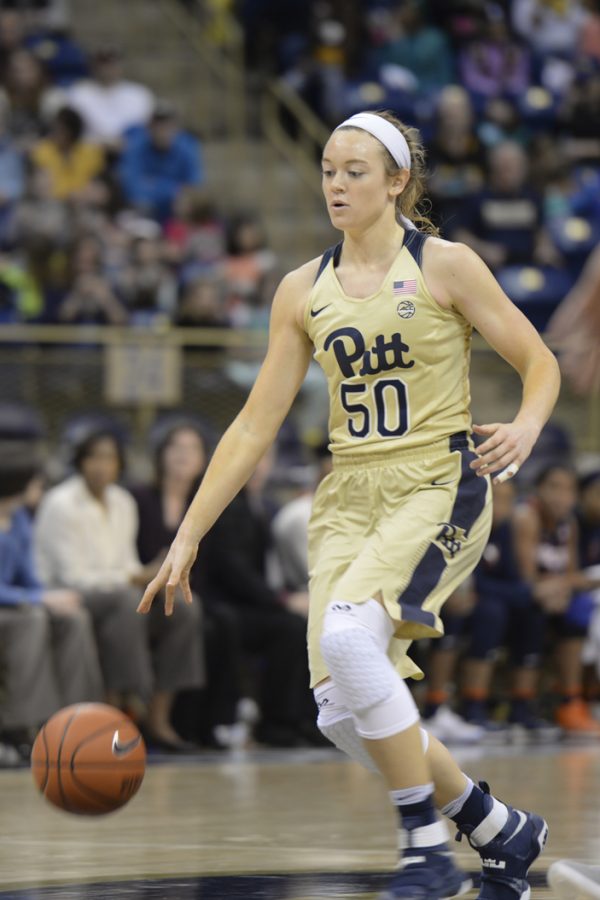 The Pitt women’s basketball team’s showdown with the Virginia Cavaliers Sunday afternoon was set up to be a turning point for the Panthers’ season, win or lose.

In a battle of teams with identical 2-3 records in the ACC, the winner would move to 3-3 in conference play and rise to the middle of the pack, while the loser would fall toward the bottom — right where ACC media members and coaches picked Pitt to finish before the season.

Judging by her performance against Virginia, sophomore forward Brenna Wise doesn’t care much for preseason rankings. Pitt’s leading scorer dropped a career-high 26 points on the Cavaliers while going a perfect 11-for-11 from the free throw line.

The Panthers had led 37-33 late in the third quarter before a Virginia run turned the game around with a 16-6 run. That’s when Wise sparked Pitt’s comeback, spotting up in the corner and nailing a three to make it a one-possession game.

“Basketball is a game of runs,” Pitt head coach Suzie McConnell-Serio said after the game. “Virginia made their run in the second half and got the lead, but our team never quit. They continued to make plays, they continued to fight.”

First-year guard Alayna Gribble followed Wise’s triple with a three from the same spot to tie it, then sophomore forward Kauai Bradley hit a three of her own the next time down the floor to give the Panthers the lead. One more from Gribble made it 55-51 with just over two minutes left, and Wise tallied a layup and five straight free throws in the final minute to ice the 62-54 win.

“I came down and hit a three, then Alayna and Kauai, and then Alayna again. I exploded, I was so excited,” Wise said after the game. “They make it easy to score points. We have a threat from everywhere. On any given night, any one of us can have a career-high.”

Now, the Panthers (12-7 overall, 3-3 ACC) must move forward to face another daunting task Thursday night in Raleigh, North Carolina, against the No. 18 North Carolina State Wolfpack (15-5 overall, 5-2 ACC). This will be Pitt’s fourth matchup against a ranked opponent in seven ACC games, including three on the road.

The Panthers’ first three games against Top 25 teams were all losses, but Pitt was competitive on the road against No. 8 Louisville before losing 73-52. The Panthers fought hard against the Cardinals, only to fade in the fourth quarter. They’ll need to bring that same intensity and maintain it for all four quarters to knock off the Wolfpack.

For comparison, Pitt only has three players averaging at least 7.5 points. One of them, junior point guard Aysia Bugg, will be a game-time decision to play on Thursday after missing Sunday’s game due to a concussion.

Lucky for the Panthers, they haven’t had to rely on Bugg to run their offense this season.

First-year guard Jasmine Whitney has played in all 19 games and started 15, and the true freshman mostly handled point guard duties when sharing the court with Bugg, even while dealing with a herniated disc in her back.

Pitt’s coach was pleased with the way Whitney stepped up and played through the pain against Virginia.

“Jasmine Whitney was impressive the way she managed this game,” McConnell-Serio said. “Just handling the basketball — they sent double teams at her the entire second half, and I was very proud of the way she handled the ball and made plays and got us into the offense.”

Making Whitney the team’s primary ball handler since day one shows the confidence McConnell-Serio has in her maturity as a player. Pitt will need Whitney to continue to fight through the pain and raise her game in order to pull off the upset and move to 4-3 in the ACC.

“When you have a herniated disc, you’re playing through pain. It’s just how much you can tolerate,” McConnell-Serio said. “Every time [Whitney] hits the floor, I cringe … and she bounces right back up and she continues to make plays and fight.”