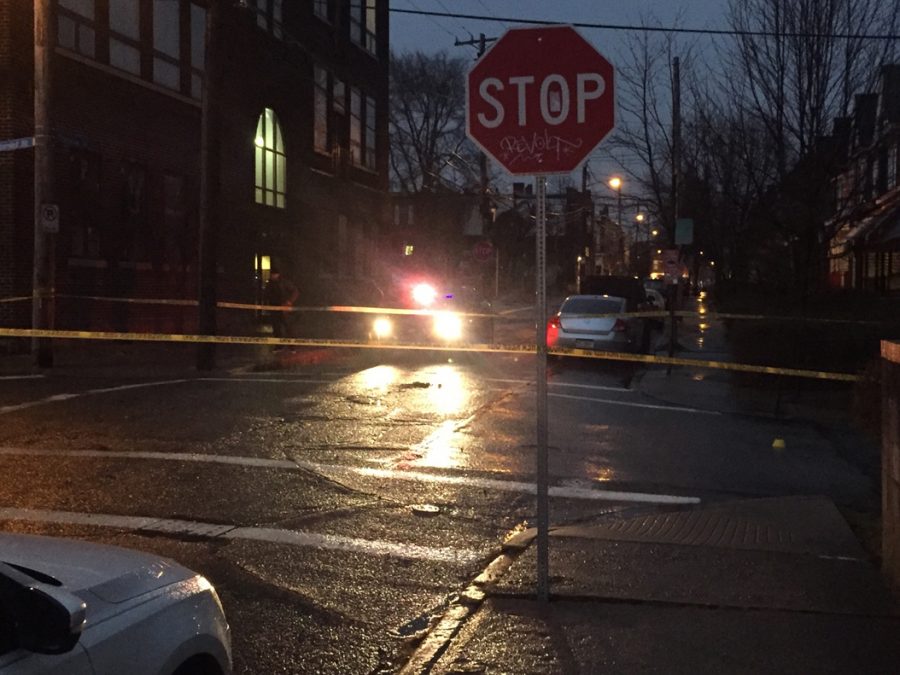 Multiple shots were fired on the corner of Hamlet Street and Boulevard of the Allies in Oakland Wednesday evening, leaving one man injured. | James Evan Bowen-Gaddy, senior staff writer

According to city police, multiple shots were fired on the corner of Hamlet Street and Boulevard of the Allies in Oakland Wednesday evening, leaving one man injured.

City police who responded to the call said an unidentified male was shot in the right pinky finger and arm near Magee-Women’s Hospital shortly before 5 p.m. He checked himself into the hospital, only a block away, while the shooter fled the scene. Police said they did not yet have any information on the suspected shooter.

Tony Yauch, of city police, said shell casings from multiple shots were found near the corner of Hamlet and Ophelia streets, where officers had set up caution tape. The later press release from city police specified the shooting occurred on Hamlet and Boulevard of the Allies.

Yauch also said the victim was not willing to divulge any information to investigators and that he “misrepresented the shooting” by saying it occurred at Craft Place and Boulevard of the Allies.

Yauch said it was surprising for crimes of this magnitude to occur in the Oakland area.

In the past year, however, there were two robberies at the Sunoco Gas Station on Craft Avenue nearby Wednesday’s shooting in March 2016. A few blocks away, there was a violent home robbery in September 2016, in which two Pitt students were duct taped and held at gunpoint.

Gary Comito, who lives just a few houses from the intersection where the shooting occurred Wednesday, said he heard at least nine shots from his home.

“I was sitting right there and watching TV and then ‘bang bang bang bang,’” Comito, 63, said. “I peeked out the window, low, and didn’t see nothing — no car, no lights.”

This wasn’t the first shooting in Pittsburgh Wednesday. According to a press release from the Pittsburgh Department of Public Safety, another shooting occurred in Knoxville near Jucunda Street at 11:39 a.m. A 21-year-old male was shot in the ribs while stopped at a stop sign but was able to make it to the hospital without an ambulance.