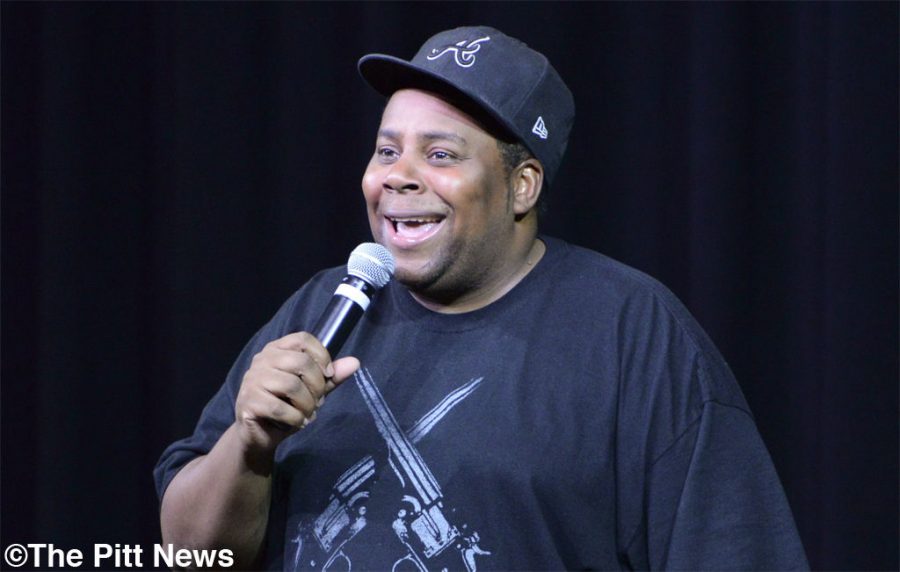 Most current college students grew up in the ’90s and vividly remember the days of VHS tapes, Dunkaroos and significantly funnier television shows on Nickelodeon and Cartoon Network.

On Monday, students reconnected with one of their ’90s icons, Kenan Thompson, who is now armed with a more adult arsenal of jokes.

“I don’t know if you know this or not … but when you smoke weed, Taco Bell is delicious,” Thompson said in his stand-up routine, attended by approximately 450 students, at the William Pitt Union. Pitt Program Council sponsored the event.

References to the drug would become a staple of his one-hour act.

Thompson, 36, was one of the stars of 1990s Nickelodeon shows “All That” and “Kenan and Kel,” and he is now a senior cast member of “Saturday Night Live.” Better known for his sketch comedy, Thompson provided a humorous runthrough of his eclectic career.

Thompson has dipped into all corners of entertainment — from fried chicken commercials that he called “racist as hell” to movies like “Heavyweights” and “The Mighty Ducks.” Thompson has found his niche in 30 Rockefeller Plaza and is now in his 12th season on “SNL,” the longest ever for an African American cast member since Tim Meadows.

“The thing about being an actor is that it’s not guaranteed, and I consider myself very lucky,” Thompson said. “Tracy Morgan left [SNL], so there was room for another black guy.”

Thompson talked about social issues in addition to his marijuana use, including Bill Cosby’s transformation from one of Thompson’s comedy inspirations into what he called a “monster” after a series of sexual assault allegations emerged against him. But Thompson kept it light by doing his renowned Cosby impression.

Thompson kept the packed house laughing throughout the night. Besides performances by Eric Stonestreet and Sasheer Zamata, most of Pitt’s guests in the past year have been lecturers.

“We really try to go across the board with the speakers, and especially with the success of Eric Stonestreet last semester, I think a comedian adds an extra excitement,” said PPC’s lecture director Lindsy Steinberger. “They’re born performers, so it just seemed like an excellent choice.”

His act mostly included jokes about his weight and its effects on his interactions, like talking to women, along with blaming his mother for feeding him McDonald’s when delivering bad news during his childhood. He wrapped his 20-minute set up with an impression of Charles Barkley, before ruminating on how funny it would be if Barkley read the news.

Thompson had some impressions of his own, including Samuel L. Jackson, Forrest Whitaker, Mike Tyson and Snoop Dogg. He spoke about smoking weed with the latter two celebrities.

His set ended with an audience Q&A, during which he fielded questions about celebrity mentors (Chris Tucker), how to avoid breaking during a funny “SNL” skit and reenacting an old “All That” character, Pierre Escargot, who famously “taught” viewers French.

“The monkey … has a bump … on his booty,” Thompson “translated” after speaking a gibberish French phrase, bringing audience members back to their days of watching sketch comedy designed for kids.

While Thompson certainly shifted his material to fit his more mature audiences, he still managed to provide students with a sampling of his long career’s humor.

The event’s timing before finals week was an opportunity for students to unwind during the busiest time of the year.

“His stand-up was really great,” said Noah Marks, a sophomore majoring in physics and the history and philosphy of science who attended on Monday night. “It’s always nice to unwind — especially with finals coming up.”