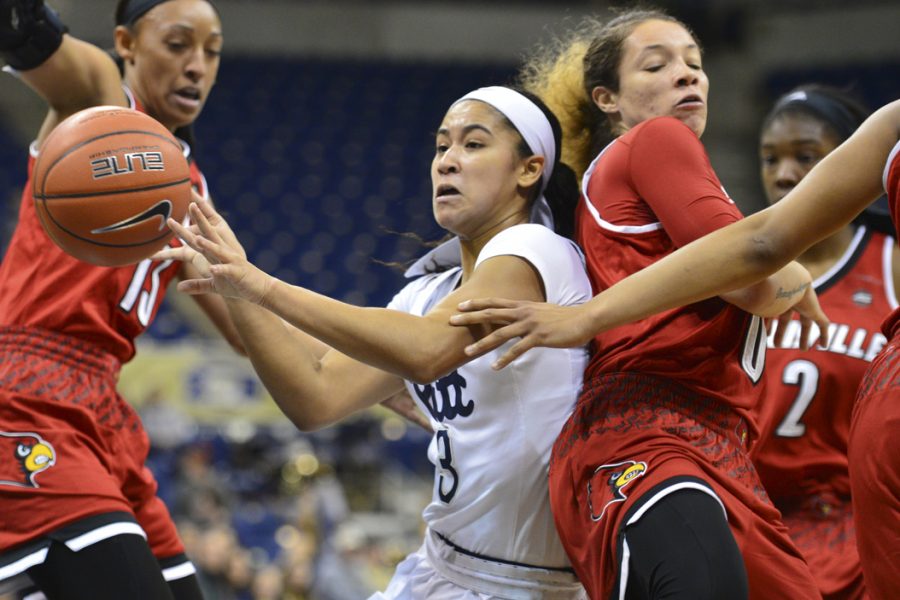 The No. 9 Louisville Cardinals used an explosive third-quarter run to pull away for a 63-48 victory Sunday against Jasmine Whitney (3) and the Panthers. Evan Meng | Staff Photographer

The Pitt women’s basketball team has tested some of the best teams in the ACC like Louisville and N.C. State, only to give up the lead toward the end of the game and walk off in defeat. Sunday afternoon, the Panthers once again battled against the best but ultimately came up short.

Pitt gave the No. 9 Louisville Cardinals a scare for the second time in three weeks, only to fade in the second half and fall short of a potential upset.

“Sometimes I feel like a broken record,” Pitt head coach Suzie McConnell-Serio said. “Louisville is a great team. They once again proved why they are a top-10 team in the country, but we gave them everything we had in the first half.”

The Cardinals (20-4 overall, 7-2 ACC) defeated the Panthers (12-9 overall, 3-5 ACC), 63-48, on Sunday afternoon at the Petersen Events Center. Pitt controlled the majority of the first half but only took a two-point lead into the break. After the break, Louisville controlled the tempo, eventually amassing a 17-point lead in the fourth quarter. The Panthers trimmed it to seven with 3:30 left in the game, but that was as close as they would come.

“I’m not content with this game today,” McConnell-Serio said. “I’m not satisfied with where we are. I want to be playing in March with this team. I don’t want our last game to be if we’re eliminated from the ACC Tournament. But we have to find a way to beat some of these teams, and we have to keep believing that we can.”

Louisville forward Mariya Moore was the difference in the game, leading all players with 20 points on five threes and eight rebounds on the afternoon.

In their last matchup, Pitt graduate transfer center Brandi Harvey-Carr scored a career-high 25 points in the Panthers’ 73-52 loss to Louisville Jan. 8. She had another efficient performance Sunday, finishing with a team-high 13 points on 5-of-8 shooting, but it wasn’t enough to pull out the win.

“I feel like I didn’t come out as strong [in the second half] as I was in the first half,” Harvey-Carr said. “I felt like they kind of changed their aggressiveness, and I feel like I wasn’t as aggressive as I should have been.”

Harvey-Carr started the game with a turnaround jumper off the backboard for two, but Louisville responded with a 3-pointer from Moore to take the lead. Panthers sophomore forward Brenna Wise then answered with a three of her own, and added a layup next time down the court to make it 7-3 Pitt.

Moore hit another three to make it a one-point game with 1:05 left in the first quarter, but Panthers sophomore forward Kalista Walters responded with a buzzer-beating layup to give Pitt a 17-14 lead at the end of the first.

The Panthers played suffocating defense in the first quarter, holding Louisville to 5-of-16 shooting while making 70 percent of their own shots from the field. But the Cardinals held a 9-6 rebounding advantage and made 3-of-7 attempts from beyond the arc to keep the game close.

Louisville stormed back in the second quarter, going on a 10-1 run and tying the game at 26. First-year guard Alayna Gribble scored with 2:37 left in the half to help the Panthers regain the lead at 28-26. Both teams endured scoring droughts towards the end of the second quarter, and Pitt went into the break holding a 28-26 lead.

The Panthers’ hot shooting should have been the story of the first half, as they made 60 percent of their attempts while holding the Cardinals to 30.3 percent shooting. But Louisville enjoyed a significant advantage in the offensive rebounding department, pulling down 10 offensive rebounds to just one for Pitt.

These extra opportunities helped the Cardinals stay in the game despite shooting only 30 percent from the floor in the first half. Louisville pounced on the Panthers out of the break, scoring the first 14 points of the second half to take a 40-28 lead.

Pitt managed only seven points in the third quarter while the Cardinals dominated on both ends of the floor to take a 47-35 lead into the fourth.

The Panthers fell behind 52-35 in the fourth quarter, then sophomore guard Cassidy Welsh helped engineer an 11-1 run to pull Pitt within seven with 3:30 left in the game. But the Cardinals answered with a pair of 3-pointers from guard Asia Durr to push their lead back to double digits and effectively seal the victory.

Wise had one answer after the game for why the Panthers let the game slip away.

“Our third quarter performance,” Wise said. “We got outscored by 14 points, they went on a 12-0 run I think. That gives them momentum, and you can’t allow that to happen.”

Pitt still outshot Louisville for the game, making 46.3 percent of its shots compared to just 34.5 percent for the Cardinals. But Louisville outrebounded the Panthers 39-26, including a 19-5 advantage on the offensive boards, creating plenty of second-chance scoring opportunities.

“Sometimes when you play a zone, that’s a scary thing, but you know that it’s going to happen, some teams get offensive rebounds. It’s the points you give up off those offensive rebounds [that matter],” McConnell-Serio said.

Next up for Pitt is a trip to Syracuse, New York, to take on the Syracuse Orange at 7 p.m. Thursday, Feb. 2.