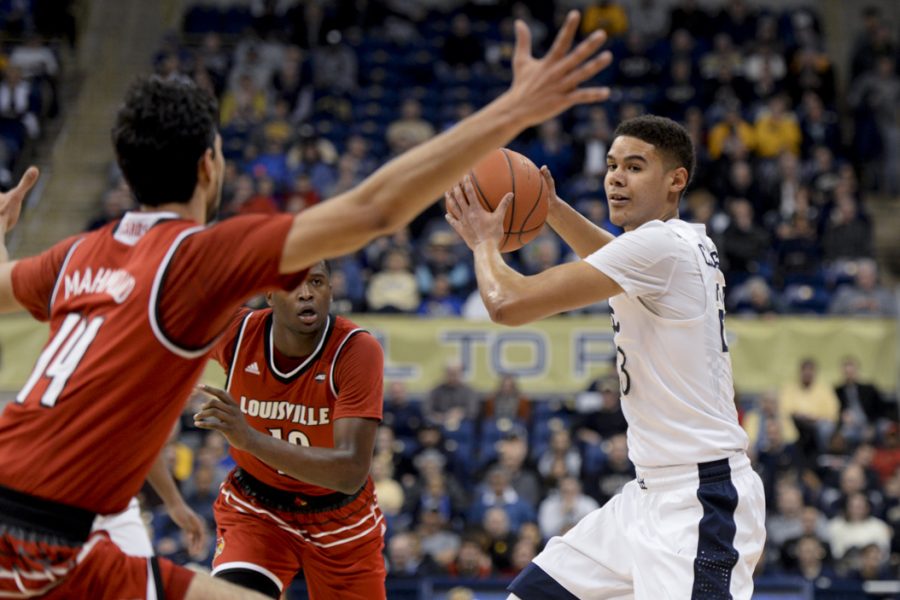 Expectations were low for the Pitt men’s basketball team going into Tuesday night’s game on the road against the North Carolina Tar Heels.

After losing six games in a row and falling to last place in the ACC, the Panthers (12-10 overall, 1-8 ACC) were 19-point underdogs against the No. 12-ranked Tar Heels. Ultimately, the Panthers walked away from the Dean E. Smith Center with a nail-biting, 80-78 loss to UNC (20-4 overall, 8-2 ACC), but not before putting a serious scare into one of the best teams in the country.

Sophomore Cameron Johnson led the Panthers in scoring with a career-high 24 points, 18 of which came from behind the arc. Michael Young finished with a double-double, scoring 19 points while pulling down 10 rebounds.

The Tar Heels kicked off the game’s scoring with a 3-pointer by junior Joel Berry, but Pitt redshirt senior Chris Jones quickly struck back with a driving layup to put the Panthers on the board. With a 3-pointer from Johnson, Pitt went into the first media timeout down only two, 7-5.

A steal from Young led to a fast break layup by sophomore guard Damon Wilson, making it a 25-22 game with 6:35 remaining in the first period of play. A missed Wilson three led to a putback down low by Young, bringing the Panthers within one.

Young was fouled during a successful layup attempt with 1:21 left in the first. After Young completed the 3-point play, Jamel Artis nailed a three with 34 seconds left, keeping the Panthers in striking distance and narrowing UNC’s lead to four.

With a one second differential between the shot and game clock, Berry dribbled away as much time as he could, fading away from the left side of the basket for a tough 3-point attempt. He missed the shot, but North Carolina’s sophomore power forward Luke Maye came up with the offensive rebound and hit a buzzer-beater layup to take a six point lead into the intermission.

UNC’s Justin Jackson inaugurated scoring in the second half with a long two. Michael Young was fouled hard as he went up for a layup in the paint but made both of his free throws to bring the Panthers back within six.

With 16:49 to go, Jones hit a turnaround jumper as the shot clock expired. Shortly after, the Panthers forced a turnover and capitalized on the opportunity with Johnson nailing a three, tying the score at 49 apiece.

Then suddenly, Pitt went cold, missing three straight three point attempts and failing to score for the next 3:33. The drought came to an end with two consecutive threes by Artis, pulling Pitt within five with 11:02 left in the second half.

Johnson reached a career-high 21 points after a layup with 8:32 remaining, making the score 59-65. After Hicks completed a three point play with a free throw, the Panthers went into the under-eight media timeout trailing the Tar Heels by nine, 68-59.

Both teams entered a scoring lull over the next few minutes, but Young hit back to back threes, drawing the Panthers to within three with 4:48 left to go. The Tar Heels missed eight straight shots from the field and went over four minutes without a field goal. Still, North Carolina was able to maintain their lead by drawing fouls and making their free throws.

The Panthers kept battling, and Johnson continued to hit outside shots, making a contested three with 3:24 left to make it a three point game, 71-68.

North Carolina responded to the Panthers with a layup from Berry. He completed the three-point play with a free throw, increasing the point differential to four. Artis hit a three to draw the Panthers back within one, but Jackson hit a layup to make the difference between the teams three once again.

After Artis missed a layup, North Carolina came down with the rebound and started to milk the clock. As soon as Pitt saw the UNC strategy, the team started to foul the Tar Heels. Although North Carolina continued to hit most of its free throws, Jones made a three with 15 seconds left in the game to keep Pitt in it, making the score 78-76.

Jackson was fouled with 9.7 left and missed his first free throw shot. He made his next, but Pitt got the ball back with the possibility of taking the game into overtime on just one shot.

UNC did not want to risk a game-tying three from the Panthers and had two fouls left to give until they reached the bonus. As a result, the Tar Heels fouled Sheldon Jeter and Artis, bleeding the clock to 5.4. Artis went to the line for a one-and-one and made both, drawing the Panthers within one and making the score 79-78.

Pitt decided to put the ball in their leading scorer’s hands to end the game, but Artis’ three-point attempt as time expired was way off the mark, sealing the win for the North Carolina Tar Heels.

The Panthers will try to stop their seven-game losing streak Feb. 4 when they take on the Duke Blue Devils at 1 p.m. in Durham, North Carolina.