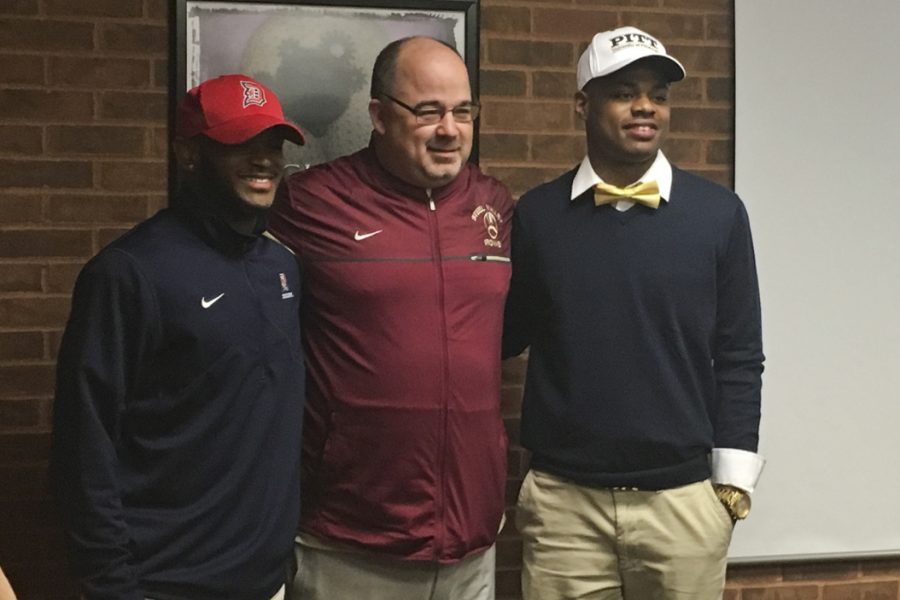 By Dominic Campbell | For The Pitt News

Inside a small, bright, cramped conference room at Steel Valley Senior High School in Munhall, Pennsylvania, the most coveted player in Pitt’s 2017 recruiting class made his commitment official.

Surrounded by his head coach, family members and a swarm of photographers and videographers, four-star safety Paris Ford signed his National Letter of Intent to play for Pitt next season.

“The stress is finally over with. I’m glad to finally be a part of the Panther family now, and it’s time to leave my legacy,” Ford said Wednesday at Steel Valley’s National Signing Day event.

Ford made it official Wednesday, but he has remained loyal to the Panthers for 474 days since tweeting his verbal commitment Oct. 16, 2015.

For such a highly touted recruit like Ford to commit so early to a school like Pitt, he had to deal with more than a year’s worth of temptation from the nation’s top teams. He received offers from Alabama, Florida, Florida State, Michigan, Ohio State and Oklahoma, among other prestigious programs.

But Wednesday, Ford said sticking with Pitt was an easy decision.

“I feel like this is always the place I’ve wanted to be,” Ford said. “Ever since sixth grade I’ve wanted to play for Pitt, and I finally had the opportunity, so I took it.”

Ford grew up in Garfield, a neighborhood in the East End of Pittsburgh just north of Oakland. He joins the likes of NFL Hall of Famers such as Dan Marino and Curtis Martin to stay at home and play for Pitt.

“Being able to represent my city is big, because you know I’m going to target anything I do and represent the city to the fullest,” Ford said. “I’ve also got to be careful though, because I know a lot of kids from here, especially my little cousins, that look up to me and I’ve got to be a role model for them.”

Ford has been dominant throughout his high school career, which began right down the road on Fifth Avenue at Pittsburgh Central Catholic High School. There, he started as a freshman on the varsity basketball team, but didn’t play varsity football. So he decided to transfer to Seton LaSalle High School in Mt. Lebanon to try to earn more playing time.

His decision paid off, as he saw the field as a starter on both offense and defense during his sophomore and junior years, racking up 1,585 yards and 27 total touchdowns along the way.

Ford transferred yet again, this time to Steel Valley, where he played for and starred on the Steel Valley Ironmen’s PIAA championship team — considered to be one of the greatest WPIAL teams in history.

The Ironmen “mercy ruled” every single team they played  — meaning the teams played the second half under a running clock because the Ironmen led by at least 35 points — en route to a perfect 15-0 season, becoming the first team in PIAA history to accomplish that feat. In the state championship game, they humiliated a perennial powerhouse in Southern Colombia, 49-7.

“Man, it’s history, it probably won’t be done again for another 10-15 years. Mercy-ruled everyone. Never has been done. It’s crazy,” Ford said.

Head Coach of Steel Valley talks of the great things that Paris Ford and Dewayne Murray have accomplished at Steel Valley @pittnewssports pic.twitter.com/jFa7phKltq

Ford is not only the top-ranked recruit in Pitt’s class of 2017, he’s one of the most celebrated prospects in the entire country. According to Rivals, Ford is the No. 3 overall prospect in Pennsylvania, as well as the No. 5 safety and No. 51 overall prospect in the nation. He also played and starred in the Under Armour All-American game, delivering a punishing hit that went viral on Twitter.

Because of this, Ford had a host of the country’s premier head coaches trying to convince him to back out of his commitment and come play for their school.

Having legendary names like Nick Saban and Urban Meyer — with eight national championships between them — asking you to join their team must be hard to resist, but Ford never wavered.

“It was hard to turn down those legendary coaches, but I had to do what was best for me and my family, and I just wanted to stay humble and grounded to Pitt,” Ford said.

Pitt defensive coordinator Josh Conklin said Wednesday that Ford will likely slide in at the field safety position next to 2015 ACC Rookie of the Year Jordan Whitehead, who plays the boundary. Ford, though, said he’s willing to do anything to play next year, and he isn’t really concerned with what position he plays.