PWSA says at least two days until water is drinkable 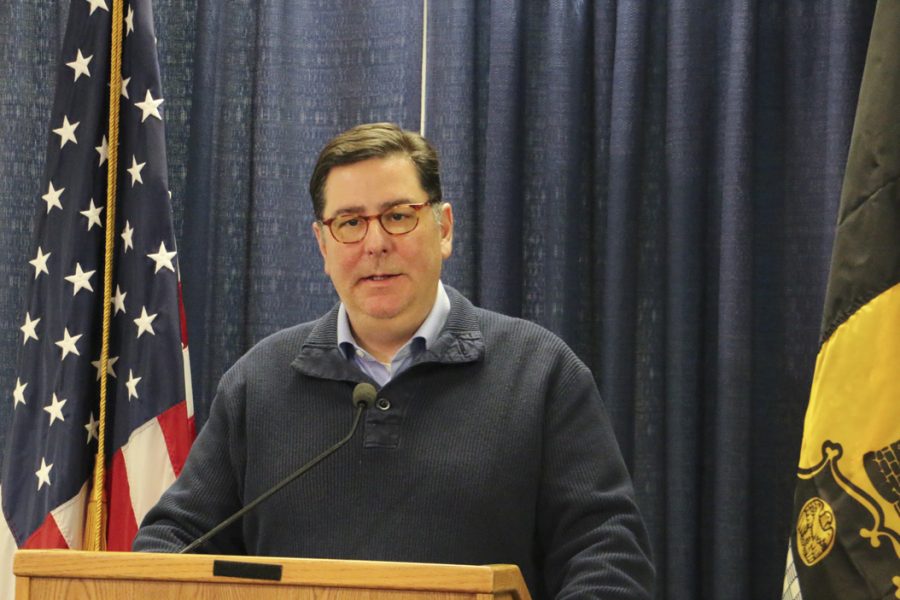 Mayor Bill Peduto, Pittsburgh Water and Sewer Authority and other safety officials outlined their plan Wednesday night to flush out the remaining “water of concern” in the eastern part of Pittsburgh’s water supply.

The press conference came as a response to the PWSA statement Tuesday night instructing residents in the eastern and central parts of Pittsburgh not to drink tap water without first running it for one minute and then boiling it. The advisory has affected about 100,000 people over the past 24 hours.

Peduto opened the press conference by assuring the public that the affected water has been tested today, and shows no trace of Giardia — a bacteria that can cause vomiting and diarrhea, among other digestive ailments. He continued by thanking the public workers who delivered water across the city to public water distribution sites.

Peduto also said the water quality of the Highland Park water filtration plant was in accordance with the Environmental Protection Agency’s national requirements for water safety — it was Pennsylvania’s own regulations that forced them to issue the boil water advisory. Pennsylvania has stricter guidelines for the acceptable level of chlorine in water than national regulations.

“If you lived in any other state, you’d be drinking the water,” Peduto said. “We wouldn’t be closing down schools.”

The Pennsylvania Department of Environmental Protection instructed the PWSA to issue the boil water advisory after noting low levels of chlorine at the Highland Park filtration center, according to Bernard Lindstrom, interim executive director of the PWSA. Lindstrom also said these concerning measurements began as early as this past Sunday.

“You have to realize that data comes in every four hours,” Lindstrom said. “It was a concern, however, we didn’t address it as a risk until Monday.”

Lindstrom went on to say that the first troubling measurement came Sunday, but that it was considered a routine “inconsistency” until the low levels had been measured enough times to consider it a risk.

Lindstrom also said at the press conference that PWSA was working closely with the DEP to resolve the issue within the next few days. In order for the DEP to lift the boil water advisory, the PWSA must demonstrate that chlorine levels are safe, and in addition, must flush out all of the “water of concern” from the water system.

Lindstrom said they’ll be flushing the water by opening fire hydrants “at locations that are safe and that do not create public hazard.” He was unable to give an exact timeline of how long this would take, or where those locations will be.

“My best engineering guess is that we will have at least two more days [without clean water],” Lindstrom said.

In the meantime, city officials have equipped distribution sites with 2,500 gallon water tanks of safe drinking water. Uber has been offering free rides to each of these tanks as long as customers are within a $10 distance of the site.

Lindstrom also said while the advisory remains in effect, the PWSA would work on increasing chlorine levels in the water, which could affect the flavor and smell once the advisory is lifted.

“[The water] is going to smell more like a swimming pool, and it’s gonna taste a lot like it too,” Lindstrom said. “For a little while.”

So far, the taste seems to be the only serious reported effect of the undrinkable water. Wendell D. Hissrich, director of the Department of Public Safety, said after examining 911 calls and hospital records within the past two days, city officials have determined that there has not been any increase in “patients exhibiting any symptoms similar to what would be present with this kind of potential contamination.”

Kevin Acklin, Peduto’s chief of staff, said the city’s reaction to the low chlorine levels has mostly been extraneous caution.

“That’s what we do as public servants,” Acklin said. “We assume the worst.”