Stallings is out of time, his sacking should come soon 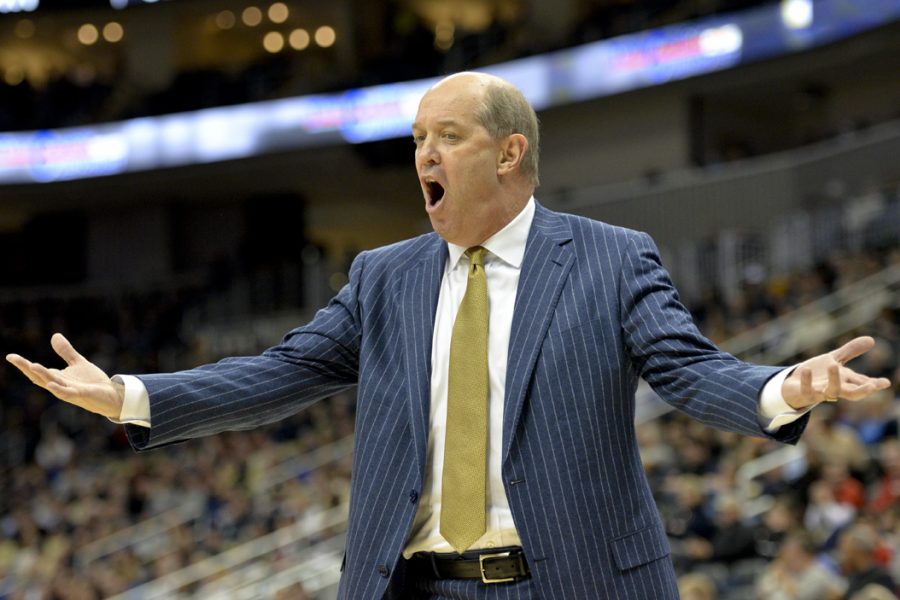 By Matthew Sable | For The Pitt News

When Kevin Stallings was first considered for the position of Pitt’s new men’s basketball head coach, many Pitt fans responded with concern and disapproval.

Still, the fan base gave him a chance. Now, a year later and after eight losses in a row — most recently to Duke on Saturday — it’s clear the athletic department made a mistake in in hiring Stallings.

Stallings took over after former head coach Jamie Dixon left for Texas Christian University following the 2015-16 season. The new head coach inherited an experienced group of players, only to transform Pitt into the worst team in the ACC in his first season.

Considering the athletic department’s current tumultuous situation as it searches for a new athletic director, it might not be an option to fire Stallings just yet — but he should be wary of the looming possibility.

Dixon was the most successful coach in Pitt men’s basketball history and the only one to guide the Panthers to the No. 1 ranking in the country. The team went through a bit of a down period in his final few seasons, but they still made the NCAA Tournament three out of the last four years and went 90-46 during that span. In his 13 years at Pitt, the Panthers went 328-123. Any coach would have a difficult time living up to his reputation.

But that doesn’t leave Stallings without blame. He was given a group capable of winning right away with the goal of building a team that could return to peak Dixon-era levels of success. Yet, under Stallings, Pitt is a non-competitive team with a miniscule chance of making the NCAA tournament.

Before Stallings became the head coach at Pitt, he was the head coach at Vanderbilt University for 17 years, from 1999 to 2016. During his time in Nashville, he experienced numerous off-the-court troubles that raised questions about his judgement and ability to build relationships with his players.

The coach blocked Sheldon Jeter — then a first-year forward at Vanderbilt — from transferring to Pitt in 2013 in an unusual move, as Pitt was not on Vanderbilt’s schedule in the next or any upcoming years. And after a Vanderbilt player’s display of poor sportsmanship, Stallings threatened him during the postgame handshake in 2015, screaming at him, “I’ll f***ing kill you.” Stallings clearly lets his personal feelings get in the way of making the best decision for his team and for his players, issues that upset Pitt fans brought up months ago when some of them objected to the Stallings hire.

Can’t believe PITT n I never will.. terrible decision to go with stallings over Brandin..

#FireStallings He’s lost the team. He never had the fans.

Stallings, 56, is the oldest coach newly hired this year by a Power Five conference team. Pitt was invited to be part of the ACC in 2013 because it brought in a new television market — the 24th largest in the country — as well as a competitive football and basketball team. If it does not live up to the ACC’s expectations for viewership, there’s a chance Pitt could be left out of the next round of expansions which could cause Pitt Athletics to lose millions of dollars.

Around college basketball, Stallings is known as one of the best offensive coaches in the game, but he has not been able to show fans why he obtained that reputation. Pitt has shown minimal improvement on the offensive end of the court and has regressed on the defensive end to the level of Ralph Willard, former Pitt coach from 1994-1999.

So far Stallings has failed to keep Pitt basketball thriving. Some fans are pointing to the loss of leadership from former four-year starting point guard James Robinson as the reason for this decline. But Robinson is not the sole difference between this year and last, and likewise not the only factor that contributed to Pitt’s competitiveness in the ACC. For Pitt to have fallen to the bottom in the conference so abruptly, there must be another source contributing to Pitt’s decline — and I’m looking right at Stallings.

A team’s failure cannot be attributed entirely to a head coach, but just as a captain goes down with his ship and a manager apologizes for an employee’s mistakes, it’s still the coach’s role to take responsibility for his team’s shortcomings.

At his current pace, Stallings’ tenure could result in the shortest term of any basketball coach at Pitt since 1910 — and maybe it should. Pitt is still in the process of hiring a new athletic director, one who will have to deal with a Stallings problem they didn’t create. The new AD might have less interest in waiting for Stallings to improve than the one who hired him, possibly preferring instead to bring in a new coach to lead the program.

After the athletic director position is filled, we should turn our attention to the future of Pitt basketball.

Write to Matt at [email protected].