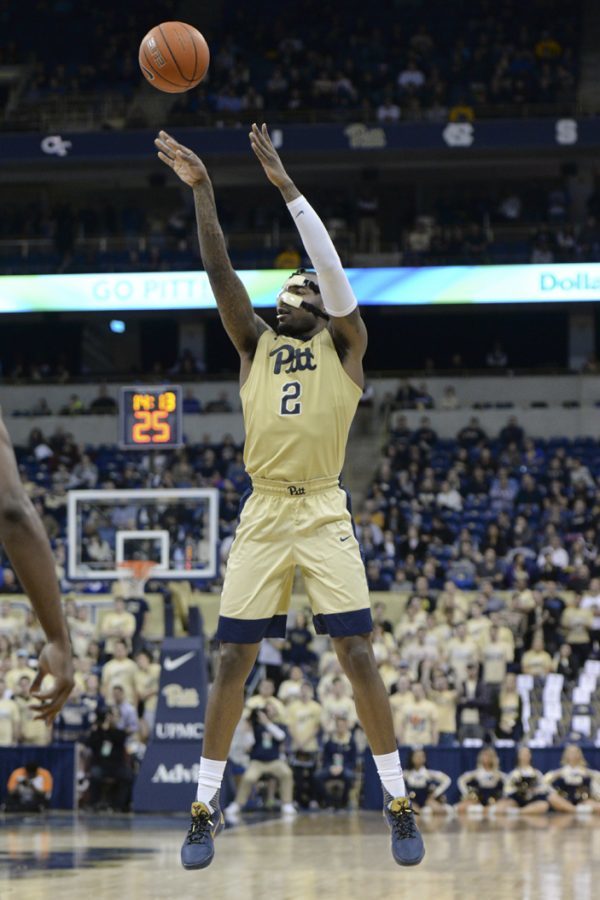 After eight straight losses, the Pitt men’s basketball team is back in the win column — and for now, out of last place in the ACC.

Young tied a career high with 30 points along with seven rebounds and a pair of crucial late-game blocks. Jeter tallied 17 points and a team-high eight rebounds on 5-of-9 shooting, while Jones added 14 points, five rebounds and three assists. Jones only attempted five field goals, making three, but he finished 8-of-9 from the free throw line.

Pitt needed every bit of those impressive efforts to snap its losing streak and send BC to its eighth straight defeat, as the game got off to a disastrous start. On the game’s opening possession, Panthers senior Jamel Artis — the leading scorer in the ACC — landed on a defender’s foot and appeared to badly twist his ankle, hobbling off the court in visible pain.

He returned to the game less than eight minutes later, but clearly at less than 100 percent, as he finished with just six points in 23 minutes of action. Artis played about six minutes in the first half before Panthers head coach Kevin Stallings inserted true freshman point guard Justice Kithcart back into the lineup.

Kithcart went to work as soon as he took the court. After making only one of 15 3-point attempts coming into the game, Kithcart drained his first two shots from beyond the arc to give Pitt a 12-8 lead less than five minutes in.

The Eagles took control of the game from there, making six shots in a row as part of a 17-5 run to take a 25-17 lead at the third media timeout. Then, with Pitt trailing 29-22, Kithcart drained his third 3-pointer of the game, sparking a 12-2 run that gave the Panthers a one-point lead late in the first half.

BC took the lead back with an uncontested layup after Pitt left 6-foot-11 forward Nik Popovic all alone in the paint — the second free layup the Panthers allowed in the half. Young then made one of two free throws next time down the court, and the teams went into the break tied at 31.

Young led all scorers with 11 points at halftime, along with a team-high five rebounds. Meanwhile, the Eagles received eight points from graduate transfer forward Mo Jeffers along with seven from true freshman point guard Ky Bowman.

Pitt carried its momentum from the end of the first half to the start of the second, as Young tallied a pair of free throws and a 3-pointer on the Panthers’ first two possessions.

Jeter added a pair of free throws, followed by a thunderous fastbreak dunk after a behind-the-back pass from sophomore guard Cameron Johnson. He then drilled a three on Pitt’s next possession to give the Panthers a 43-35 lead with 17 minutes left in the game.

The Eagles kept fighting, cutting the deficit to seven at 67-60 with 6:10 remaining. But Pitt stretched its lead back to 12 after another jumper by Jones and a pair of free throws from Jones.

The Panthers converted seven out of eight free throws the rest of the way, sealing the 83-72 victory and moving them out of the ACC’s basement.

Pitt will return home to host the Syracuse Orange at the Petersen Events Center at 1 p.m. Saturday, Feb. 11. The Orange defeated the Panthers in their first matchup Jan. 7, 77-66, the first of eight straight losses for Pitt before Wednesday night’s victory.