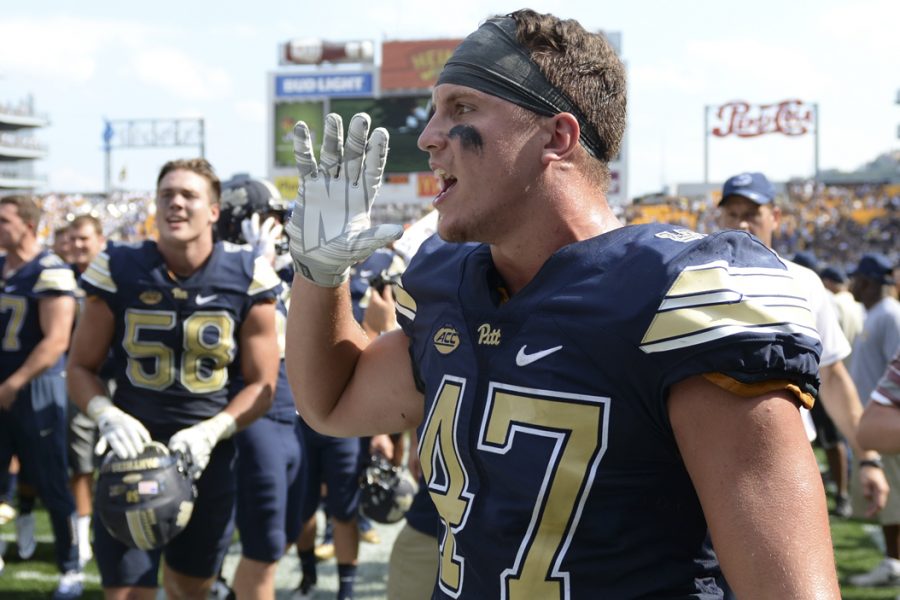 Already well represented on the various All-ACC teams for their performance on the field, members of the Pitt football team are now receiving accolades in the classroom.

After placing four players on the 2016 All-ACC First Team, with nine players recognized overall, Pitt had six players named to the 2016 All-ACC Academic Team Wednesday morning. The Panthers’ six representatives tied for second most in the conference out of 14 schools.

According to the press release, a student-athlete must have earned a 3.00 GPA the previous semester and maintained a 3.00 cumulative average during his undergraduate and/or graduate academic career to be eligible for consideration.

“We want our student-athletes to be achievers in everything they do and these six young men embody that quality,” Pitt head coach Pat Narduzzi said in a press release. “Their work ethic and commitment made them standouts on the field and in the classroom.”

Bisnowaty, a Pittsburgh native who has already earned a bachelor’s degree in communication, made it onto the All-ACC Academic Team for the fourth consecutive year. He is currently pursuing graduate work in health and fitness, and CBS Sports projects him as a third-round pick in the 2017 NFL Draft.

Bookser, another Pittsburgh native who is majoring in communication, started all 13 games this year at right guard, playing well enough to earn Honorable Mention All-ACC recognition.

Galambos, a media and professional communications major, started all 13 games at middle linebacker the past two seasons. He also played in all 13 games in 2013 and 2014 at the same position while making a combined 12 starts, racking up 283 total tackles over his four-year career.

Mitchell, who also hails from Pittsburgh, has already earned his Bachelor’s degree in marketing and is now enrolled in Pitt’s Katz Graduate School of Business.

He played in one game at the University of Wisconsin as a true freshman in 2012 before transferring to Pitt and sitting out the 2013 season. Mitchell then started all 13 games as a sophomore in 2014, playing the first eight as a cornerback before moving to strong safety for the final five.

A foot injury shortened his 2015 season, but he played in all 13 games as a senior in 2016, making four starts at strong safety.

Orndoff, who earned his Bachelor’s degree in administration of justice in 2016, is now a three-time All-ACC Academic honoree. After playing in all 13 games — including seven starts — while making five touchdown receptions as a junior, Orndoff started all 13 games as a senior and racked up 35 catches for 579 yards and five more touchdowns.

Bisnowaty and Orndoff are the only holdovers from last year’s All-Academic team, when five Panthers made the cut.

Peterman, meanwhile, enrolled at Pitt as a graduate transfer from the University of Tennessee before the 2015 season and quickly supplanted Chad Voytik as the Panthers’ starting quarterback. He played in all 13 games in 2015, starting the final 11, while completing 61.5 percent of his passes for 2,287 yards, 20 touchdowns and eight interceptions.

The 6-foot-2, 225-pound quarterback continued to excel in 2016, leading the ACC with a 163.4 passer rating while completing 60.5 percent of his passes for 2,855 yards, 27 touchdowns and only seven interceptions. Peterman, who is pursuing his MBA in Pitt’s Katz Graduate School of Business, is projected by CBS Sports as a fourth-round pick in the 2017 NFL Draft.