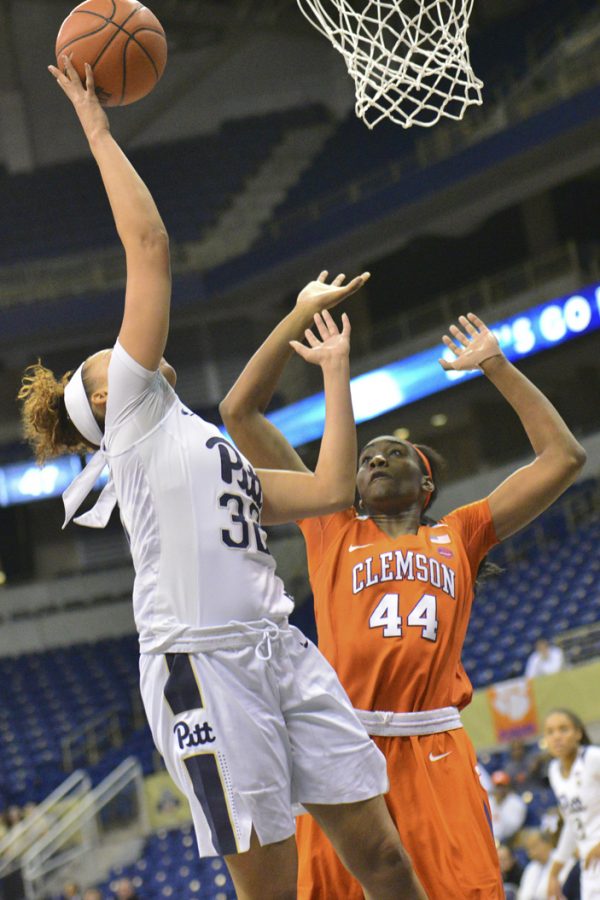 The Pitt women’s basketball team continued its trend of playing well in the first half of games and failing to perform in the second half in yet another loss Thursday night.

Returning to the Petersen Events Center after a two-game road trip, the Panthers (12-12 overall, 3-8 ACC) fell to the Clemson Tigers (14-11 overall, 3-9 ACC), 54-46. Pitt has now dropped five games in a row after after exceeding expectations early on in conference play.

“Once again, just not taking care of the basketball, missed layups, missed open shots,” McConnell-Serio said. “It’s a disappointing performance offensively. We can’t beat anybody in this league scoring in the 40s. We have to be able to put points on the board.”

The Panthers grabbed the first possession of the game, but Clemson forward Nelly Perry rebounded a shot from Pitt sophomore forward Brenna Wise and took it to the basket for the first points of the game. Panthers center Brandi Harvey-Carr then quickly found her spot in the paint and put up a jumper to get Pitt on the board.

Clemson’s tight defense proved successful in keeping the Panthers from making it to the basket. The Tigers tallied six points before Pitt first-year guard Alayna Gribble came off the bench and nailed a three.

Pitt junior guard Aysia Bugg sped up the offense and rocketed a long pass to sophomore forward Kalista Walters, who scored her first points with a layup. Clemson added to its lead with a triple from junior Nelly Perry, but Wise put up a 3-point play with a layup and a foul shot to make the score 11-10.

Perry sank another 3-pointer for Clemson, but a matching triple from Gribble brought Pitt back within one point. Harvey-Carr followed a Clemson layup with one of her own, and a free-throw from Gribble tied the game at 16 at the end of the first quarter.

After an exciting first quarter, the offenses slowed to a crawl at the start of the second, as neither team scored for the first two minutes. After Clemson guard Victoria Cardaci added to the score with a 3-point shot, the Panthers answered with a layup from Walters to make it 19-18.

Pitt took the lead for the first time in the game when Walters swiftly drained a jumper from just outside the paint to make it 22-21 with 3:39 left in the second quarter. Stiff defense from both teams prevented any further scoring until 1:12 remained in the half.

A foul on Wise sent Clemson to the free throw line, allowing the Tigers to take a 23-22 lead into halftime.

Going into the break, Walters topped the Panthers with eight points, closely followed by Gribble with seven points. Perry led the way for Clemson with 10 of the team’s 23 points.

“We were keeping up with them in the first half,” Wise said. “You go into the locker room, you make adjustments — what can we we do different to extend the lead — and I think they made adjustments that we didn’t respond to. But at the end of the day, it comes down to hitting shots.”

The Tigers put up four points in the third quarter before Pitt put a stop to the run with a jumper from first-year point guard Jasmine Whitney. The Tigers retaliated, scoring the next five points and putting Pitt in an eight-point hole, 32-24.

“For some reason, we came out in the third quarter flat once again,” McConnell-Serio said. “They hit shots, and we didn’t. We got looks in the first couple possessions, we got stops. We held a team to 54 points. At halftime, they had 23, so it’s not our defense, it’s our offense.”

Pitt forward Destinie Gibbs started the final quarter with her first basket of the night, but Tigers guards Jaia Alexander and Aliyah Collier each put up a basket to push Clemson’s lead back to nine at 43-34.

With six minutes remaining in the game, the Panthers started clawing back.

Pitt sophomore guard Cassidy Walsh broke away for a layup, drew a foul and converted a pair of free throws for her first points of the night. Gibbs drilled a jumper from just inside the arc, quickly followed by a Walters layup to cut the deficit to five.

The Panthers continued to find scoring opportunities with Bugg and Walters putting up two points apiece to make it 46-44. But that was as close as they would come, as the Tigers closed out the 54-46 win.

“We made a lot of little mistakes that got us down, and by the time that we had a chance to come back, it was late in the fourth,” Walters said.

McConnell-Serio said her team needs to regain its aggressive playstyle in order to snap this losing streak.

“We’re an underdog in every game,” McConnell-Serio said after the game. “We were picked last in this league, so we go into each and every game with the mindset we play with everything to win and nothing to lose. I think we’ve gotten away from that where our players are now playing tight and hesitant.”

The Panthers will travel to Durham, North Carolina, to take on the Duke Blue Devils Sunday, Feb. 12, at 2 p.m.