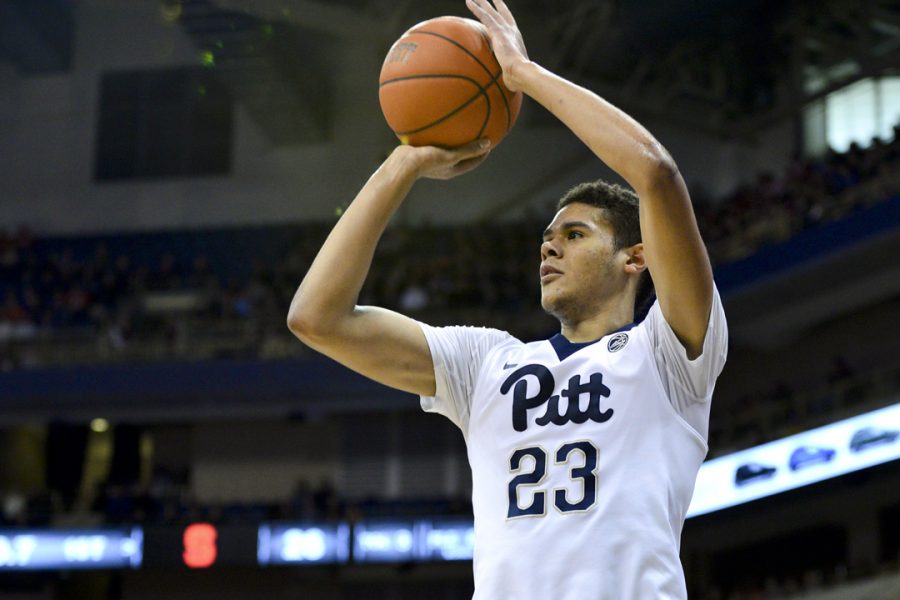 After ending a month-long, eight-game losing streak that prompted some to call for the firing of head coach Kevin Stallings, the Pitt men’s basketball team is now on a winning streak.

“Really proud of our team, proud of the way we played,” Stallings said. “I thought we played really well. I thought we followed the game plan … Our approach against the zone was much better today.”

Johnson said he spent extra time preparing for the game and expected to put on a good shooting performance.

“I got extra shots up last night, I got a couple up this morning,” Johnson said. “I just wanted to make sure I got into a good rhythm going into the game, and it worked out.”

The Orange started strong, jumping out to a 7-1 lead with two consecutive baskets by guard Andrew White III. But Pitt kept it close, cutting the deficit to 13-10 with back-to-back dunks by Young.

At the second media timeout, Syracuse still held a three-point lead at 15-12. Despite the slim margin, the Orange had shot 70 percent to the Panthers’ 33.3 percent.

Pitt surged in the ensuing stretch, tying the game at 17 on a 3-point basket by Johnson. The Panthers then took their first lead since they were up 1-0 on a jump shot by senior forward Sheldon Jeter.

A 3-point basket by Johnson capped a 13-3 run, putting Pitt up 24-18 with under six minutes to go in the half and forcing Syracuse head coach Jim Boeheim to call a timeout. Play was relatively even to close the half, but Panthers point guard Jamel Artis hit a pair of free throws with less than a second to go, giving Pitt a 35-28 lead heading into the break.

Rebounding was the difference in the opening half, as the Panthers crushed the Orange 26-9 in that statistic. Of the team’s 26 rebounds, 11 came on the offensive end — a lofty total even against Syracuse’s 2-3 zone defense.

Johnson was the only player in double figures at the half, with all 12 of his points coming from four 3-pointers.

“Cam needs to step forward against teams that zone, because he can really shoot,” Stallings said. “Cam was very efficient today. He was aggressive.”

Syracuse guard John Gillon led the way for the Orange with nine points on 3-5 shooting.

Both offenses struggled at the outset of the second half, scoring only six points combined before the first media timeout. Young tallied four while Syracuse forward Tyler Lydon scored the other two, and with 15:19 to go, Pitt held a 39-30 advantage.

The teams went back and forth in the next couple of minutes, with the Panthers’ lead growing to 11 after a pair of free throws from Young with 12:44 left to play. The Orange responded on their next possession, as Lydon drained a 3-pointer to make it 47-39, Pitt.

Halfway through the second, Boeheim chose to switch up his defensive strategy, employing a full-court press to try to slow down the Panthers’ offense. The strategy forced Pitt into several turnovers, but the Orange couldn’t convert on the offensive side of the floor, and a 3-pointer by Johnson gave the Panthers a 12-point lead with 8:59 to play.

But Orange kept up the pressure and eventually it paid dividends.

With 50 seconds to go, Syracuse had the ball down by four. The Orange passed the ball inside to Lydon, who was all alone under the basket. But Lydon couldn’t corral the ball for what would have been an easy basket to make it a two-point game, instead letting it go out of bounds off his hands.

Johnson hit two free throws on Pitt’s next possession, but the Orange kept cutting into the lead. Then, with less than four seconds to go, Jeter went to the line with his team up by three and a chance to seal the game. He made both free throws, and the Panthers hung on to win 80-75.

After being last place in the ACC just three days ago, the Panthers are now tied for 12th place in the conference with the Clemson Tigers. Young attributed the team’s recent change of fortunes to its desire to get out of the cellar.

“When you’re at the bottom of the league, no one’s taking you seriously, and when you get blown out consecutive games in a row, that hits your pride,” Young said. “Once your pride gets hit, you’ve got to man up or shut up.”

The Panthers will continue their three-game homestand at the Pete Tuesday, Feb. 14, when they take on the Virginia Tech Hokies at 7 p.m.