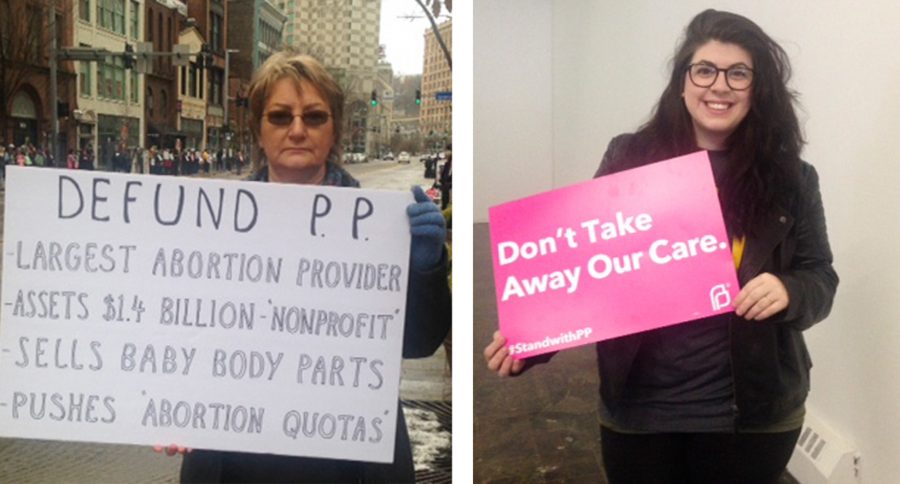 On any given day, you can find small groups of protesters outside Planned Parenthood clinics across the country.

But the pro-life national movement came out in full force Saturday to pressure the president and Congress into moving forward with plans to strip funding from the women’s health care organization. The coalition #ProtestPP, which pushes for the government to fund Federally Qualified Health Centers that do not perform abortions, organized a rally in downtown Pittsburgh at 9 a.m.

Pauline Donnelly, 63, stood near Planned Parenthood volunteers holding a sign with four bulleted reasons to defund the organization that in part read “largest abortion provider” and “sells baby body parts.” She worked in the past as a neonatal and transplant nurse and said she doesn’t support the methods abortion providers use.

“I took care of babies that they’re aborting at the same gestational age. So I can ensure you that they’re human beings and sensitive to pain,” Donnelly said. “[Planned Parenthood] is doing quite well on their own with $1.3 billion in net assets every year … I don’t know why a taxpayer would have to pay … for something so heinous in our eyes.”

Pro-choice groups and Planned Parenthood volunteers — holding a pink banner with the words “Health Care Happens Here” scrawled in bold lettering — responded to the protest in kind, gathering on opposite sides of the street to defend the health care provider.

The morning, which was largely attended by former or current health care professionals, proceeded without confrontation or chanting as people drove by or were escorted into the facility. Escorts, who helped individuals get to and from the facility, were easily identified by their pink vests.

About 10 protesters from The International Socialist Organization, a group with a pro-choice stance, stood caddy-corner from Planned Parenthood holding signs that read “Stop the war on women” and “Our bodies, our choice.”

In the fluctuating political climate, abortion has been the subject of debates and marches frequently throughout the past year. Pro-choice advocates marched along Bigelow Boulevard and Forbes Avenue on Pitt’s campus three weeks ago to mark the 44th anniversary of Roe v. Wade, the Supreme Court decision that legalized abortion in the United States.

Since that march, the pro-choice movement has seen some setbacks. The Pennsylvania Legislature passed Senate Bill 3 Feb. 8, which would amend Pennsylvania’s current Abortion Control Act, changing the 24-week cutoff for abortions to 20 weeks, except in instances of medical emergency where there is insufficient time before the abortion is performed.

The bill allows no exceptions for rape, incest or fetal abnormalities, and would also ban the “dilation and evacuation” medical technique.

In previous attempts to defund the service, Planned Parenthood has defended its role in communities as more than just an abortion clinic. According to Planned Parenthood, 3 percent of all health services it provides are abortion services.

“It’s hard on a day-to-day basis with what’s going on in the news and world around us to not feel discouraged,” Wozniak said. “So it’s important to go to events like this, be surrounded by people who share the opinions that I share and are fighting the same fight.”

Wozniak was one of about 60 who showed up to an “I Stand With Planned Parenthood” celebration that also began at 9 a.m. Saturday in the art gallery SPACE, located on the 800 block of Liberty Avenue. Planned Parenthood advocates shared personal stories and wrote postcards to Pennsylvania senators and Gov. Tom Wolf to support women’s health and to ensure that family planning and health and wellness remain a priority to the administration.

Diane Lassman, a 61-year-old nurse turned yoga instructor, filled out postcards to send to state legislators during the celebration. She said the organization provides vital and critical services to both men and women.

“I worked as a nurse in the neonatal intensive care unit, so I saw babies having babies,” Lassman said. “And when babies are born through poverty, there are all kinds of issues that affect them.”

Lassman also said the resources that pro-life organizers provide are not enough.

“For a woman who has support around her it’s hard enough. Take a child or a person who doesn’t have that and how do they cope?” Lassman said.

Chenell Donadee, who was at the Protest Planned Parenthood event and is an intensive care unit physician, said the facts provided about abortion rates and access to family planning and contraceptives may provide an answer that can satisfy both parties.

“So, we want access to family planning and contraception and they want decreased abortions and so the answer is the same,” Donadee said. “That’s to provide education and birth control. Then both sides would get a lot of what they want.”