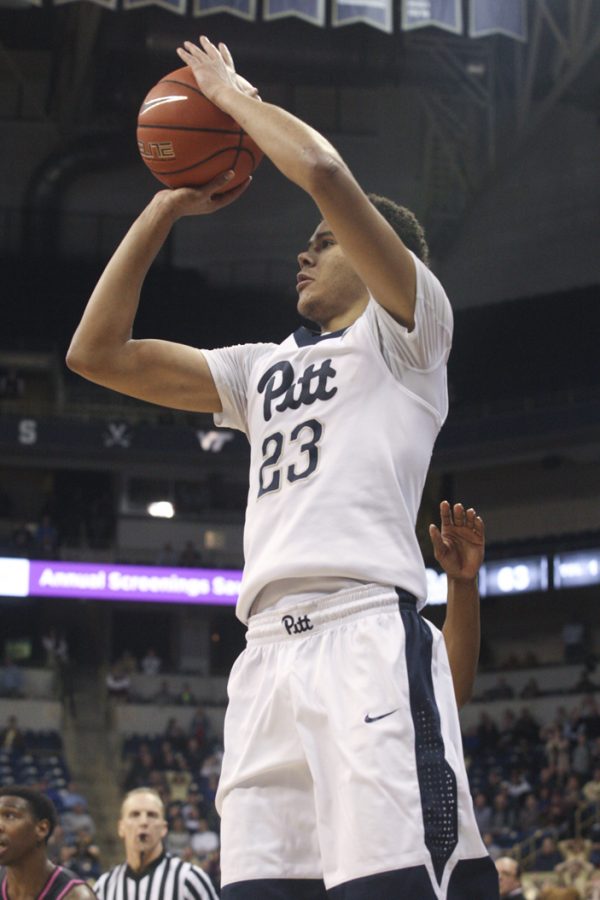 Then, the Panthers’ 11-point lead against the Virginia Tech Hokies unraveled in a way some might have deemed impossible — but was all too familiar to longtime Pitt fans.

The Panthers held a 40-29 halftime lead over the Hokies at the Petersen Events Center after putting together a masterful first-half performance from beyond the arc. Pitt shot 8-for-11 on 3-point field goals for a whopping 72.7 percent in the opening 20 minutes, and it looked like the team had finally figured out how to win without sixth man Ryan Luther.

Virginia Tech stuck around by making five threes in the first half along with its first two 3-point attempts after the break, but the Panthers kept up their hot shooting to maintain their double-digit lead. After a layup by senior forward Sheldon Jeter, Pitt led 52-41 with 12:28 remaining.

While an 11-point lead might be a comfortable margin for another team, Panthers fans in the stands withheld their enthusiasm — and rightly so.

Hokies guard Justin Bibbs nailed a 3-pointer to cut it to 52-44 going into the under-12 media timeout. A jumper by VT forward Zach LeDay made it 52-46 — a competitive score, but still a two-possession game. I was naive. Surely it’s impossible to score more than five points on a single possession, right?

After a steal by LeDay, Hokies guard Ahmed Hill drove the length of the floor for a fastbreak layup. Panthers senior forward Michael Young fouled Hill from behind as he fired up his shot, theoretically giving Hill a chance for an old-fashioned 3-point play.

But referees decided to review the play to determine if Young committed a flagrant foul, which would give Hill an additional two free throws as well as giving VT possession of the ball.

To review, there are two types of flagrant fouls: a Flagrant 1 and a Flagrant 2. The NCAA rulebook defines a Flagrant 1 as “excessive and/or unnecessary, not a legitimate play on the ball, and/or a hold or push from behind.” A Flagrant 2 involves “extreme/vulgar/abusive conduct” and results in an automatic ejection from the game, though the in-game penalties are the same.

Young did meet the criteria of the Flagrant 1 by holding Hill from behind as he attempted his layup. The way it’s written in the rulebook, it was the right call.

Still, I always thought in order for a foul to be considered flagrant, the contact had to be severe enough to prevent the shot from going in — which is why the offense receives two free throws along with possession of the ball.

But maybe I’m just old school. The game has changed, and so has its rulebook.

The NCAA implemented the “Flagrant 1 and Flagrant 2” system in 2011 in an effort to better protect the players and eliminate egregiously physical and dangerous fouls, then added more rule changes in 2013 aimed at preventing physical defenders from disrupting the offensive flow of the game.

That being said, nothing about what Young did put Hill in any sort of danger. Rewarding the Hokies with two points, two foul shots and possession of the ball in that situation seems excessive.

What happened next may just be what this tumultuous season of Panthers basketball is remembered for — right alongside Steve Vasturia’s game-winning 3-pointer for Notre Dame in overtime of the ACC opener, and that 106-51 loss versus Louisville.

Hill made both foul shots, cutting the deficit to 52-50. Bibbs then cut through a screen, received the inbounds pass in the corner and immediately drained a 3-pointer, capping off the unthinkable 7-point play.

In one possession and less than two seconds of game time, Pitt’s 52-46 lead had disappeared. VT had the lead, 53-52, and although 9:06 remained in the game, this one might as well have ended right away.

To the Panthers’ credit, they didn’t fold after the unfortunate turn of events. They responded to the adversity, coming right back with a jumper by Jeter and a 3-pointer by sophomore guard Cameron Johnson to retake the lead at 57-53.

The teams then traded six-point runs, and Pitt led 63-59 with 1:53 to play. But the Panthers wouldn’t score another point. The Hokies took the lead for good on a 3-pointer by guard Seth Allen with 1:10 to play, then survived three potential game-tying 3-pointers by Pitt in the final 15 seconds to hold on to win, 66-63.

Some fans might point to those three missed shots with a chance to tie the game as the definition of “Pitting” — a term used by tortured Panthers fans to describe losing a game in excruciating fashion. Prominent examples include the 2009 Regional Final loss versus Villanova on Scottie Reynolds’ buzzer-beating layup, or the 2015 Armed Forces Bowl against Houston, in which Pitt led 31-6 in the fourth quarter only to lose, 35-34.

But for me, the 7-point play was truly the embodiment of “Pitting.” It would be nearly impossible to find another team coughing up a six-point lead in one possession, if it’s ever happened at all.

It’s astonishing that this sequence may have just dashed the Panthers’ NCAA Tournament hopes.