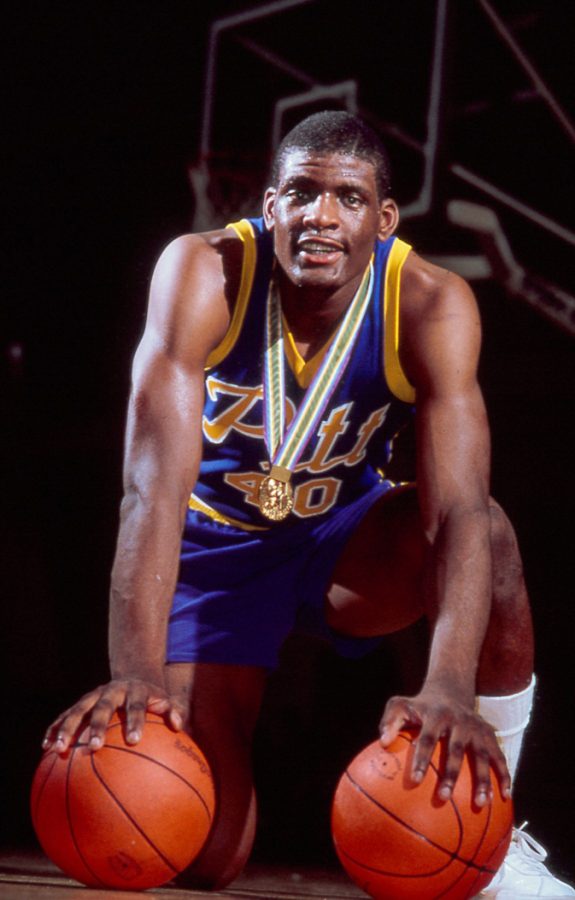 Sam Clancy averaged a double-double in all four years as a Panther from 1977-1981. Courtesy of Pitt Athletics

Despite its overall fluctuating performance, the Pitt men’s basketball program has produced a litany of great basketball players throughout its illustrious history.

Many have made their marks in the block Pitt font and infamous “Dinocat” Panther logo, but others have left their legacies in the classic royal blue script uniforms — which the Panthers will rock at the Petersen Events Center on Saturday afternoon against the No. 17 Florida State Seminoles.

Stars such as Brandin Knight, Julius Page, Aaron Gray and Carl Krauser helped cement Pitt as a Big East power during Ben Howland and then Jamie Dixon’s tenure. Older Panthers fans will remember 5-foot-8 guard Don Hennon dazzling defenses in the 1950s to the tune of 24.2 points per game for his career, long before the trio of Levance Fields, Sam Young and DeJuan Blair led Pitt to the Elite Eight in 2009.

But when the Panthers take the court this Saturday in their throwback royal blue-and-yellow digs, they’ll be harkening back to a different time period: 1973-1996.

This is the first time in more than 20 years that Pitt’s royal blue jerseys will be seen on the hardwood, although the football players already flaunted theirs in a Homecoming win against Georgia Tech in the fall.

Here are the top five players to don the royal blue Pitt script jerseys for the Panthers:

“Send it in Jerome!”

Bill Raftery’s iconic call following Jerome Lane’s glass-shattering dunk vs. Providence in 1988 is what Lane will always be remembered for. But aside from that thunderous throwdown, Lane was always a solid contributor on both ends of the floor — averaging 13.1 points and 10.4 rebounds over his three seasons at Pitt in the mid-80s.

The Denver Nuggets selected Lane in the first round of the 1988 NBA draft, and he played professional basketball for 12 seasons.

Clyde Vaughan was another efficient scorer and rebounder from the 1980s, averaging 16.9 points and 7.7 rebounds from 1980-83. Vaughan finished his Pitt career with 2,033 points, one of only two Panthers ever to reach the 2,000-point plateau. He still ranks in the top five at Pitt in career points, scoring average and rebounds.

Following his Pitt career, Vaughan was a sixth-round selection by the Indiana Pacers in the 1984 NBA Draft. Vaughan instead chose to play professionally in England, where he averaged 28.2 points per game over his eight-year career.

Billy Knight was the highest-scoring player in the Pitt script era, averaging 22.2 points per game while playing for Pitt from 1971-74. Knight was especially prolific in the 1973-74 season when he helped Pitt win 22 games in a row and led the Panthers to the Elite Eight where they lost to eventual national champion NC State. Knight earned second-team All-American recognition following the NCAA tournament run.

Knight went on to have a successful career in the ABA and NBA, making an All-Star team in both leagues. He also was general manager for the NBA’s Atlanta Hawks before stepping down following the 2007-08 season.

Before embarking on a 10-year NFL career as a defensive end with the Seattle Seahawks, Cleveland Browns and Indianapolis Colts, Sam Clancy was a monster in the paint for the Panthers’ hoops teams from 1977-81.

Clancy averaged a double-double in all four seasons at Pitt, averaging 14 points and 12.1 rebounds a game in his first year, then raising his scoring average to a career-high 16.3 points per game as a senior in the 1980-81 season. He finished his career with averages of 14.4 points and 11.6 rebounds per game.

Clancy was the first Panther to reach 1,000 career points and 1,000 career rebounds and still ranks as Pitt’s all-time leading rebounder with 1,342 career boards. He is now the coordinator of Pitt’s Varsity Letter Club, which is dedicated to helping establish enduring relationships between Pitt’s varsity sport letterwinners and the University.

Charles Smith teamed up with Lane in the 1980s to form a formidable duo in the Big East. Smith had an illustrious career at Pitt, winning Big East Player of the Year in 1988 and making the All-Big East First Team in back to back seasons.

Smith was prolific in the paint and on the glass, averaging 16.8 points and 8.1 rebounds in his Panthers career. He is Pitt’s all-time leading scorer with 2,045 career points and he ranks second in school history with 987 career rebounds.

The Philadelphia 76ers selected Smith as the third overall pick in the 1988 NBA Draft, and he went on to play 10 seasons of professional basketball.