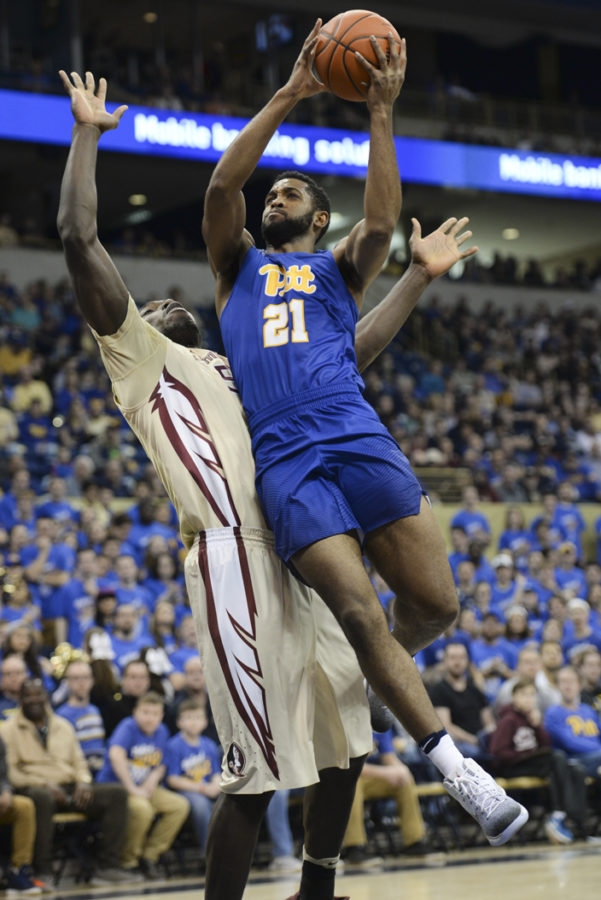 There must be something special about those throwbacks.

“The shorts were a little short, but besides that, it’s all good,” Pitt senior forward Sheldon Jeter said.

Rocking their retro royal blue jerseys, the Panthers (15-12 overall, 4-10 ACC) knocked off the No. 17 Florida State Seminoles (21-6 overall, 9-5 ACC) Saturday at the Petersen Events Center, 80-66. Jeter’s career night was the difference in the game for Pitt, as the senior forward contributed 29 points and eight rebounds on 12-of-14 shooting in the win.

“Sheldon was unbelievable. That was as good of a performance that we had this year,” Pitt head coach Kevin Stallings said after the game.

Florida State won the tip off and kicked off the game’s scoring with a fadeaway jumper from junior guard Xavier Rathan-Mayes. Jeter quickly answered back with a 3-pointer to put the Panthers on the board.

Florida State started out hot from the floor, making its first five shots before the first stoppage of play to take a 13-9 lead by the first media timeout. But the Panthers battled back from their deficit and senior point guard Jamel Artis tied the score at 13 with a three-pointer with 14:55 left in the first.

Soon after, Pitt took their first lead of the game with a three by Jeter.

The game remained close as the Panthers took a 28-27 lead with 6:38 left in the first half. Jeter and Artis continued their hot shooting, while 7-foot-1 center Michael Ojo dominated the post for the Seminoles, scoring eight points and drawing several fouls.

“They’re tall kind of like you’re supposed to be tall. We’re tall just kind of because,” Stallings said. “They’ve got speed and quickness out front, and then they’ve got humongous size inside, and that’s more how you design a team I think, generally. Sometimes, what you have to do is take what your strengths are and try to find it and apply it to their weaknesses.”

Artis said toughness was the key to keeping up with the size of the Seminoles — the tallest team in the nation.

“We’re not the biggest team. We’ve just got to be tougher than the next opponent. Just go out there and play hard and be the aggressor from the jump,” Artis said.

Sophomore guard Cameron Johnson energized the royal blue Oakland Zoo crowd with a steal and fast-break layup to put the score at 30-27. Florida State answered right back as sophomore guard Terrance Mann cut into the lane for a layup of his own.

In the first half, Pitt’s bench contributed more than usual. Redshirt junior guard Jonathan Milligan ignited the bench by making a 3-pointer, first-year guard Justice Kithcart contributed a steal, and first-year forward Corey Manigault showed some toughness on the glass with an offensive rebound and putback with 4:17 left in the half.

“I thought our bench guys really gave us some quality minutes, especially in the first half,” Stallings said. “We needed their productivity and their presence today, and they gave it to us.”

Florida State sophomore guard PJ Savoy tightened up the game with an off-balance jumper from just inside the 3-point line, then Panthers center Rozelle Nix rolled off of a screen and made a layup with 14 seconds left in the first.

The beloved big man’s basket fired up the Zoo faithful and gave Pitt the momentum — and a 41-37 lead — heading into the break.

Despite being outrebounded by a 15-12 margin, Pitt rode hot 3-point shooting at a 40 percent clip to maintain their lead over the No. 17 ranked team in the country.

Jeter was the Panthers’ offensive catalyst in the early parts of the first half, scoring 11 points on 4-4 shooting. Pitt also received steady scoring production from Artis and Johnson, with 10 and seven points, respectively.

“We adjusted our offense a little bit for this game due to the nature of their defense, and I thought that paid dividends for us,” Stallings said.

Jeter continued his hot shooting to start the second half, scoring Pitt’s first five points of the half with a tip-in layup and a wide-open 3-point shot.

The Panthers continued their run after a Jeter steal led to Johnson sinking a 3-pointer, electrifying the Petersen Events Center. After an 8-0 run, Pitt held a 49-39 lead with 16:24 left in the second half.

Pitt dominated the early goings of the second half, with Jeter scoring six quick points to stake the Panthers to a 55-43 lead. Artis then sank a 3-pointer to extend Pitt’s lead to 15 and send the Zoo into a frenzy.

But this game was far from over.

Florida State started to find some success in pressing the Panthers, creating two quick turnovers and cutting Pitt’s lead to a 10-point margin at 58-48 with 11:41 left in the second half. A timely three-point shot by Seminoles guard Braian Angola-Rodas made the score 61-56 Pitt with 8:34 left in the game.

Angola-Rodas continued his bench production by adding a key block and scoring a layup on the next possession to bring Florida State within three, causing Pitt to call a timeout with 7:49 left in the game.

The game was close heading into the last five minutes, but then Jeter made his biggest shot of his signature performance as a Panther, knocking down a corner three to give Pitt a seven-point lead with 4:55 left.

Jeter, who stormed back down the court as the Zoo roared in approval, said he didn’t know right away he would have such a big impact — but then he got in his groove.

“I didn’t get the feeling [that I couldn’t miss] until the fourth or fifth make,” Jeter said. “The first one I just thought, ‘It was a good shot, good pass. But they just kept falling for me.”

Senior forward Michael Young came up with a timely steal to set up a trip to the free-throw line for Artis with 2:10 remaining, and the Baltimore native sank both shots to extend the Panthers’ lead to 76-64. Florida State couldn’t come any closer, and Jeter fittingly capped off the game with a layup and a career-high 29 points to seal Pitt’s 80-66 victory.

“That was fun. I’m proud of them,” Stallings said about his players. “That’s not an easy team to play, at all.”

With only four games left in the regular season, the Panthers will travel to Winston-Salem, North Carolina, to take on the Wake Forest Demon Deacons at 7 p.m. Wednesday, Feb. 22.