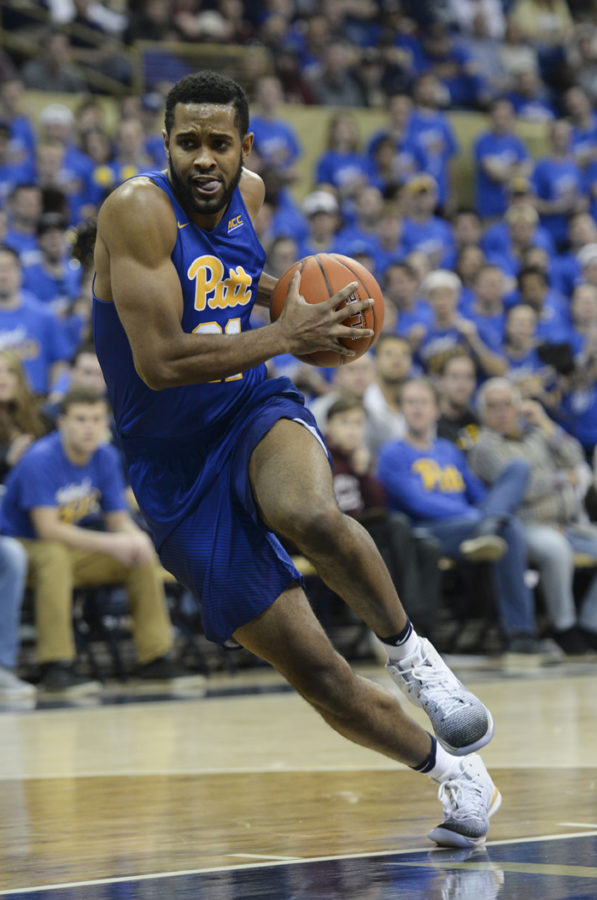 Fans in the Oakland Zoo made sure Sheldon Jeter knew they appreciated his 29-point effort on Saturday against Florida State. John Hamilton | Visual Editor

It was happening again.

The fans knew it. Pitt’s players knew it. Hell, even Florida State’s players probably knew it.

The Pitt men’s basketball team had built a 15-point second-half lead against the No. 17 Florida State Seminoles after a 3-pointer by senior point guard Jamel Artis with 13:14 remaining. Nick Smider, a sophomore computer science major at Pitt watching from the upper level of the Oakland Zoo, figured Pitt had the game wrapped up.

“It’s hard to imagine them blowing a lead that late in the game,” Smider said. “I couldn’t even see [Artis’ 3-pointer], because the kid in front of me stood up … everyone around me just kind of like stood up screaming, couldn’t believe what they were seeing.”

Still, the Panthers were only four days removed from letting an 11-point second-half lead slip away in a crushing 66-63 loss versus Virginia Tech. And sure enough, in a little more than five minutes of game time, the Seminoles whittled that 15-point deficit down to three.

Another seemingly comfortable double-digit lead trimmed to just a single-possession game, with still more than eight minutes to play. All of a sudden, Smider wasn’t feeling so confident.

“I’m thinking that they probably lost it,” Smider said. “Because how can you lose that much momentum and that many points in such a short amount of time?”

Pitt sophomore guard Cameron Johnson knew his team had been here before, but he wasn’t about to let the Zoo faithful down again.

“We looked at each other like, ‘It’s not gonna happen again. We’re going to step it up,’” Johnson said at a Monday press conference.

The teams traded buckets for a couple of minutes, and Pitt held a slim 66-62 lead with five minutes left. That’s when senior forward Sheldon Jeter buried a corner 3-pointer to stretch the Panthers’ lead back to seven, and Pitt cruised the rest of the way to an 80-66 win.

“That was when they really needed a momentum shift, and as soon as he hit that, the other team just fell apart,” Smider said. “I think the next couple of possessions they just kept turning it over. That just sealed it, that shot right there.”

Jeter shouted and strutted back down the court with both hands cocked by his side signaling “three,” as the frenzied Zoo showered him with praise. Chants of “Shel-don Je-ter!” rained down throughout the Petersen Events Center for the remainder of the game.

“[Jeter’s 3-pointer] lit up the entire arena, I felt. I mean, everyone else showed up to play, but he was like next level on that,” Smider said. “I think everyone was really noticing the effort he was giving, and that definitely helped feed the win.”

Jeter said he’d heard the crowd chant his name before — but never in a moment like that.

“At the time, when they started chanting my name, the game was secured, so I went back and watched the game and I kind of just drank it in,” Jeter said Monday. “My whole tenure here, I’ve had a great relationship with the Oakland Zoo. So for them to chant my name in such a big game, it just made me feel appreciated.”

With the Panthers’ two leading scorers — Artis and senior forward Michael Young — combining for only 27 points in the game, Pitt needed a third scoring option to step up. Johnson has usually been that third option, averaging a solid 12.1 points per game on the season.

But this time, it was Jeter who took over. The Beaver Falls, Pennsylvania, native outscored Artis and Young put together, tallying a career-high 29 points while shooting at a 12-of-14 clip.

Jeter is averaging a career-best 8.4 points per game this season, but his field goal percentage has nosedived from 53.3 percent last season down to 43.8 percent this year. Still, he’s played his best basketball of late, scoring 17 and 14 points, respectively, in Pitt’s wins against Boston College and Syracuse prior to the Virginia Tech debacle.

“It’s not a two-person show anymore,” Jeter said. “Now, you’ve got four or five people who can score over 10 points any game. I’m finally starting to be aggressive, Cam’s hitting his stride, Chris [Jones] is still making plays, and it relieves the pressure off [Artis] and Mike. Now the whole defense can’t just focus on them, they have to respect me, Cam and Chris, as well.”

He said his teammates have been pushing him to be more aggressive on offense after a slow start to the year. That approach seems to be working, as he’s averaging more than 17 points per game over his last four outings.

The Panthers now sit at 15-12 overall and 4-10 in the ACC, tied with Clemson for 12th place in the loaded ACC. With four games left in the regular season — including two against top-20 teams North Carolina and Virginia — Pitt has little to no margin for error.

It’s not too late to put together a late-season surge and sneak into the NCAA Tournament, but the Panthers can’t afford any more letdowns like the one they experienced against Virginia Tech — and it sounds like they’re well aware of that.

“At the very minimum, we should use [the Virginia Tech loss] as motivation to go out and get as many as we can these next four [games], go out and beat North Carolina, Georgia Tech, Wake Forest and Virginia,” Johnson said. “Just knowing that we dropped some that we should have won, we’re just now like, ‘OK, let’s go win some that people might not expect us to win.’”

As for Jeter’s career-best performance that gave the Panthers a chance to make a postseason run, Smider said he hasn’t seen anything like it during his time at Pitt.

“Not in person, I definitely haven’t,” Smider said. “You’d probably have to go back a couple of years to get something similar, to be honest.”