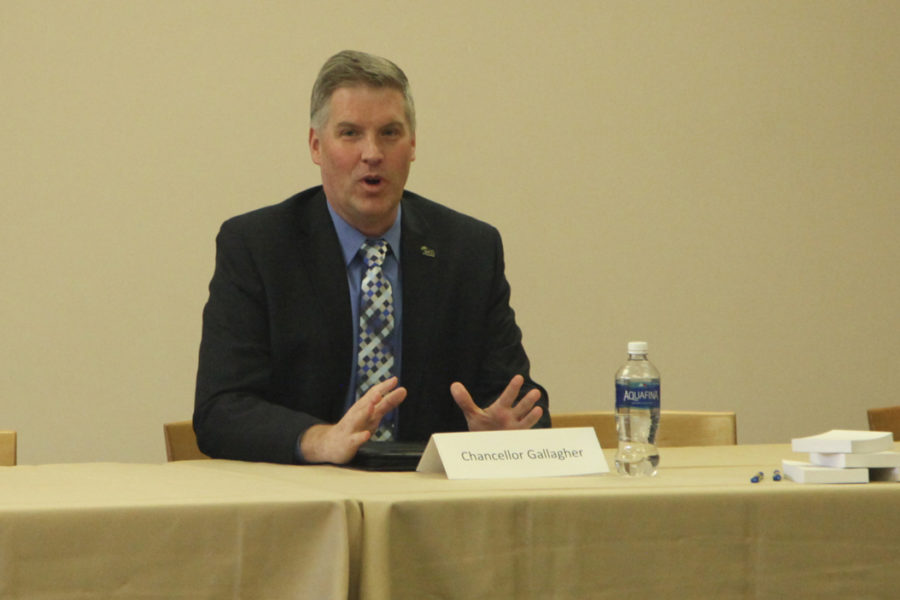 The Obama administration passed DACA, or Deferred Action for Childhood Arrivals, to allow undocumented immigrants who arrive in the United States before they turn 16 to receive a renewable two-year deportation deferral and work permit.

In support of this policy, Gallagher was among more than 250 college presidents to sign a statement urging Trump to save the program.

“America needs talent — and these students, who have been raised and educated in the United States, are already part of our national community,” the letter said. “They represent what is best about America, and as scholars and leaders they are essential to the future.”

Lawrence Feick, a professor of business administration in the Joseph M. Katz Graduate School of Business, said Monday’s discussion was the second part of a series called the University Forum on Current Issues. This first part was a public immigration forum that took place last month in the Teplitz Memorial Moot Courtroom of Pitt’s School of Law.

Gallagher said the discussion Monday was restricted to faculty and that reporters were not allowed to attend, but he and others spoke to The Pitt News after the meeting.

“This was designed to be a discussion and address any immediate concerns that faulty has about the recent event,” Gallagher said. “We wanted to create a venue where administrators and faculty could share their experiences and talk about it.”

Immigration and civil rights came into question after Trump passed an executive order Jan. 27, suspending visas and banning travelers from seven Muslim-majority nations for 90 days after the order’s release, which would end June 2.

The order aims to protect American citizens and “ensure that those admitted to this country do not bear hostile attitudes toward it and its founding principles.” The countries listed include Iran, Iraq, Syria, Yemen, Somalia, Sudan and Libya. According to the Pitt Factbook, 61 out of 3,012 international students at the University are from one of the five banned countries. No current Pitt students are from Yemen or Somalia.

Stacy Ranson, a student services supervisor with the English Language Institute at the University, deals frequently with international students as part of the linguistics department. One of Ranson’s biggest concerns is knowing how to direct students who are just learning English to help and resources if they run into immigration problems in the near future.

“I wanted to attend today’s event to make sure that students have concrete support with all the things that are changing,” she said.

Others in the community have expressed similar fears.

Crowds of protesters marched down Forbes Avenue, and some gathered in the Pittsburgh International Airport, on Jan. 29 to protest Trump’s executive order.

Less than a month later, Las Palmas Restaurante, a local Mexican restaurant, closed its doors in solidarity with Hispanic communities on Feb. 16. Immigrant workers protested the order by not showing up to work and making a statement about how the American workforce and economy wouldn’t function normally if immigrants were deported.

In addition, while Pittsburgh still remains on the cusp of officially becoming a “sanctuary city,” students and faculty have been advocating since December 2016 to make Pitt a “sanctuary campus.” If deemed a sanctuary campus, Pitt would not have to cooperate with immigration enforcement or deportation actions directed at Pitt students and faculty. So far, Gallagher has not made a decision to become one, but faculty are willing to hear what he has to say on the issue now.

Lu-in Wang, a visiting professor of law from the University of New Mexico School of Law, jumped at the opportunity to speak with fellow colleagues and the chancellor about the current immigration situation.

“I think the meeting provided some great insight on how to be supportive of students,” Wang said. “Hearing what other people have experienced and the listening to the questions people raised was very informative.”

Gallagher said he wants to have more of these meetings with Pitt faculty in the coming months.

“These [immigration] concerns go far beyond the communities that most people think of at first,” he said. “We are all dealing with a class of problems and we need to actively engage with each other to understand these issues.”