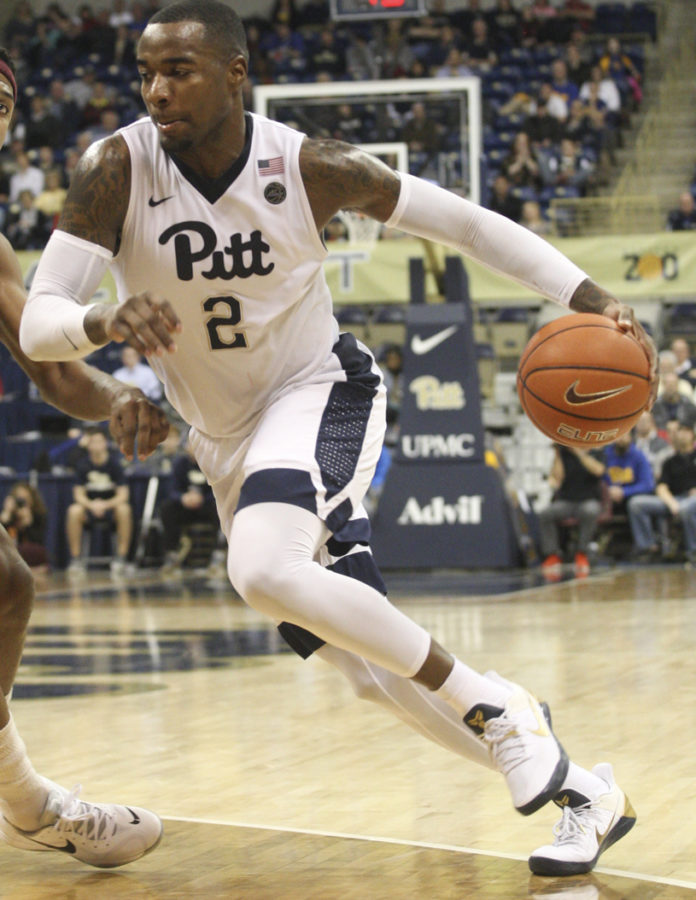 Pitt senior forward Michael Young scored 16 points and pulled down four rebounds against Georgia Tech, but his efforts were not enough to lead his team past the Yellow Jackets. TPN File Photo

The Pitt men’s basketball team had its fourth win in five games all but secured late in the first half Wednesday night in Winston-Salem, North Carolina.

Instead, the Panthers blew a 19-point lead to the Wake Forest Demon Deacons in what might be the team’s most excruciating loss in a season filled with them.

With a chance to climb further back into the NCAA Tournament conversation with a win, Pitt (15-13 overall, 4-11 ACC) dominated Wake Forest (16-12 overall, 7-9 ACC) for much of the game. The Demon Deacons didn’t take their first lead until less than two minutes remained, but that was all the time they needed to pull out a 63-59 comeback victory.

Trailing by two with 11 seconds left, the Panthers failed to convert on a 3-pointer in the final seconds for the third time in a little more than a month. They also missed a potential game-tying three in a 79-74 loss at North Carolina State Jan. 17, then missed three game-tying threes in the final 15 seconds of a 66-63 loss versus Virginia Tech Feb. 14.

This time, the need for a last-gasp 3-point attempt seemed almost out of the question, as Pitt led by double digits for the majority of the game.

The senior duo of Michael Young and Jamel Artis got the game off to a strong start for the Panthers, but Wake Forest’s star power forward John Collins took control later in the game.

Pitt’s two ACC Player of the Year contenders scored the game’s first eight points in two-and-a-half minutes before the Demon Deacons responded with an 8-0 run of their own. An emphatic dunk by Collins got Wake Forest on the board, and another powerful slam by Collins tied the game at eight.

Both offenses stalled in the next few minutes, but the Panthers retook a 13-11 lead with 14:08 left in the half. Artis made a 3-pointer with 12:46 left, and Pitt held a five-point lead at the second media timeout.

Panthers substitute guard Jonathan Milligan hit a 3-pointer on the first possession after the timeout to put Pitt up 19-11. The basket, which came with 11:45 left in the first half, marked the Panthers’ first points scored by anyone other than Young and Artis.

The defense picked up on both sides, as both teams went nearly three minutes without making a basket. With 7:37 to go in the first half, the Panthers maintained a 24-15 lead.

Pitt then went on its second 8-0 run of the game, stretching its lead to 30-15 on a fast break alley-oop layup by Young, at which point Young had as many points as the Demon Deacons’ entire team. A long 3-pointer by sophomore guard Cameron Johnson then gave the Panthers a 35-17 lead, and a free throw by Johnson made it a 19-point game with 2:51 left in the half.

Wake Forest surged to close the half though, finishing on a 7-0 run to cut Pitt’s lead to 36-24 at the break. Young was a force in the first half with 17 points, while Collins led the Demon Deacons with 10 points and six rebounds in the opening 20 minutes.

The Panthers held Wake Forest to 34.4 percent shooting from the field and 16.7 percent from 3-point range. They limited Demon Deacons guard Bryant Crawford, who averages 15.7 points per game, to just four points.

Still, as has been the case virtually every time Pitt has built a double-digit advantage this season, the Panthers’ lead was far from safe.

Pitt scored first in the second half, but Wake Forest continued to chip into the deficit, scoring the next six points to make it an eight-point game at 38-30. The teams played evenly for the next few minutes, with Pitt holding on to a 47-37 lead six minutes into the half.

But Young picked up his fourth foul with 14:02 left to play, forcing Pitt head coach Kevin Stallings to send him to the bench because his next foul would disqualify him from the game.

Young’s absence severely impacted the Panthers on the offensive end of the floor, as they went six minutes without scoring a point. Senior forward Sheldon Jeter ended Pitt’s drought with a 3-point play, but Collins made a layup on the next possession to make it a 50-45 game with about eight minutes left to play.

By the time Stallings reinserted Young into the game with 5:53 left, Wake Forest had whittled the Panthers’ lead down to three. The teams went back and forth over the next few minutes, and Pitt still clung to a 55-51 lead at the final media timeout.

The Panthers lost the lead with 2:37 to go, as Demon Deacons first-year guard Brandon Childress tied the score at 57 with a free throw. Wake Forest took its first lead of the game next time down the floor on a layup by Collins with 1:36 remaining.

Jeter tied the game with a pair of free throws on the ensuing possession. Then Collins went to the line on the other end but missed both free throws, giving the Panthers the ball with 49 seconds left.

Artis turned the ball over, and another Collins layup gave the Demon Deacons a 61-59 lead with 18 seconds to go. Young then missed a potential go-ahead 3-point basket with 11 seconds left, but the ball went out of bounds to Pitt.

Senior guard Chris Jones then threw away the inbounds pass with five seconds to go, giving the Panthers no chance to tie the game or take the lead, and Childress made a pair of free throws to seal Wake Forest’s 63-59 victory.

Pitt went the final 8:36 of game time without making a shot and missed 17 of its final 18 field goal attempts in the loss.

This loss has to be infuriating for Stallings, who has often been critical of his team’s effort in the second half of games. The Panthers have blown several big leads throughout the season, and it has cost them two out of their last three games — including an equally devastating loss to Virginia Tech last week.

“I can’t really explain how you go from one half to another like that,” Stallings said after the Virginia Tech loss. “And that’s happened on several occasions this year, and it just doesn’t make any sense.”

Wednesday night’s loss might have been even harder to explain, as the Demon Deacons’ 19-point comeback was Pitt’s largest blown lead of the season.

The Panthers will return home for Senior Day to take on the ACC-leading No. 8 North Carolina Tar Heels. Tipoff is at noon on Saturday, Feb. 25, in the last game of the year at the Petersen Events Center.