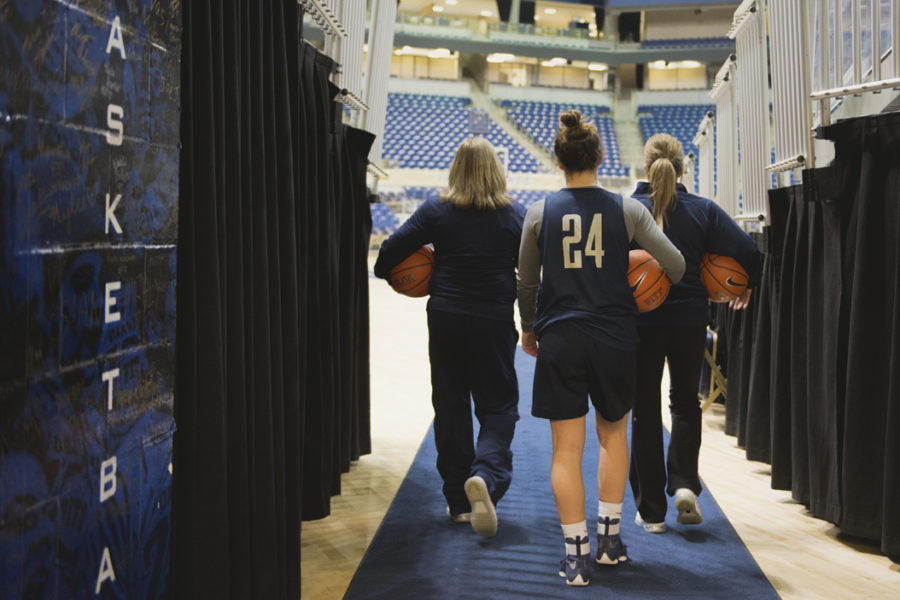 With her mom and aunt watching from the sidelines in the third quarter of a late November blowout against Slippery Rock University, Pitt sophomore guard Madison Serio drained the first 3-pointer of her college career.

Late in the fourth quarter, she buried her second long-range attempt. When she nailed her third 3-pointer the next time down the court, the Panthers’ bench celebrated as though they had just won the national championship.

Serio’s mom and aunt weren’t just proud spectators — they were invested in her basketball career, just as they had been in their own careers and briefly, her sister Jordan’s. Two years before Madison took the court for Pitt in 2016, her older sister did the same, both carrying on a family tradition.Their mom is Pitt head coach and Women’s Basketball Hall of Famer Suzie McConnell-Serio, one of eight siblings in Pittsburgh’s unofficial First Family of Basketball. Everyone in the family played point guard, and six of the eight siblings attended college on a basketball scholarship.

“I just know working with her, I can always trust her in everything. She will always have my back,” McConnell-Serio said about her sister. “She has my best interests in mind, and I have a basketball person on that sideline making suggestions.”

Though the local hoops legends grew up in Pittsburgh, it would be almost 30 years after their last game together before the duo reunited on the sidelines to try to turn their hometown program around.

For the McConnells, the backyard of their Brookline house in Pittsburgh’s South Hills served as the family’s own personal basketball court.

It was there the eight siblings unwound after a day at school. It was there Suzie and her younger sister Kathy competed alongside their brothers Tom and Tim. And it was there the McConnells learned nothing could permanently come between them and their passion for basketball.

“We had the basketball hoop up against the chimney — we would play until it was dark,” McConnell-Miller said. “Then finally my father put up a spotlight so we could play even through the dark…all of a sudden, the court was lit up. It was like we had a whole new court.”

With so many playmates, the kids were always outside, which McConnell-Serio says taught them “how to compete.” One day it was playing Nerf football in the street by their home, the next it was wiffle ball in the backyard, and the day after that it was basketball on their personal court.

McConnell-Serio said McConnell-Miller’s tendency to rough her up often prevented their pickup games from reaching a conclusion.

“The two of us didn’t finish a lot of one-on-one battles because she was always more physical than I was,” McConnell-Serio said. “I was always finesse, and sometimes it turned into a fight.”

The family’s games of two-on-two could be just as intense.

It was always McConnell-Serio and Tim against McConnell-Miller and Tom. But the two sisters, regardless of the game, always ended up matched up against one another. They would battle it out until well after the sunset.

When McConnell-Serio was nine and wanted to play organized basketball, there was no girl’s team for her to join at Our Lady of Loreto in Brookline. So instead of waiting for her school to start a program, she joined the boys’ basketball team.

“It was interesting, because in fourth grade I had long hair and looked like a little girl,” McConnell-Serio said. “Then I played on the boys’ team for two years and in fifth grade — I guess to blend in a little more — I got my hair cut really short.”

She didn’t think anything of playing with the boys because she had already been playing with her brothers her whole life — that, and it was the only option for her. She wasn’t about to pass up the chance to the family’s point guard tradition.

After spending her time at McConnell-Serio’s practices and seeing her older sister play, McConnell-Miller asked the coach if she could join as well.

“It just seemed normal,” Tom, the oldest McConnell sibling, said about his sisters playing with the boys. “They wanted to play, and that was the opportunity presented to them, so they did it. They were both very competitive and held their own and were respected by the players on their team.”

After one year, the school formed a girl’s team coached by Dan Kail, the boy’s basketball coach. He helped the sisters develop the basic skills to be good players, laying a foundation to become great.

McConnell-Miller watched the way her older sister played, admiring her ability to handle the ball, play with a plan and control the court. But McConnell-Serio admired her sister’s game just as much, and the two became a daunting duo.

“She was someone who I could count on and I felt very comfortable with on the court,” McConnell-Serio said about her younger sister. “We had great chemistry together … I always knew where she was on the court, and we took care of each other.”

After bringing home the 1984 PIAA Championship along with her sister on the Seton LaSalle High School team, McConnell-Serio graduated and committed to Penn State. A year later, her sister would leave home to play for the University of Virginia.

After leading the Cavaliers to the NCAA Tournament in all four years as a player from 1986 to 1989, McConnell-Miller took her first coaching job as the recruiting coordinator at Pitt in 1991. She spent the next nine years years working her way up the collegiate coaching ladder before finally becoming a head coach at the University of Tulsa in 2000.

In her college years, McConnell-Serio became the program’s first ever first-team All-American and finished her career as the NCAA’s all-time leader in assists. She went on to play point guard on two Olympic teams — earning a gold medal at the 1988 Seoul Olympics and a bronze at the 1992 Barcelona Olympics.

McConnell-Serio took over as head coach at Oakland Catholic High School in 1990, winning three state championships over a 13-year span. Eight years into that stretch, she embarked on a successful playing career in the WNBA, but decided to retire after three seasons. She cited both nagging injuries and a desire to spend more time with her family, but she wouldn’t be able to stay away from the game for long.

During that time, McConnell-Miller was coaching at Tulsa until 2005 when she took over as head coach at the University of Colorado. While there, she hired her brother and former two-on-two teammate Tom as her assistant.

“To work with her was a blessing for me,” Tom said. “She is just such a great teacher. The thing about Kathy is she just has a heart for people. She just really cares about the players she coaches and her coaching staff… she creates such a family environment and it was really fun to be around.”

In 2013, McConnell-Serio took the job as Pitt’s new head coach, and she knew just who she wanted as her top assistant on the sideline.

“[McConnell-Miller] wanted to move back to Pittsburgh, bring her family back here, have her children grow up around their cousins, be around our parents and be around family,” McConnell-Serio said. “When I had the opportunity to hire her, to me it was a no-brainer.”

McConnell-Serio hired McConnell-Miller as Pitt’s associate head coach prior to her debut season at Pitt in 2013, and the same connection that existed when the two played together translated seamlessly onto the sideline. In just their second year coaching together, the sisters led the Panthers on an improbable run to the second round of the 2015 NCAA Tournament.

“People always say to me, ‘I could never work with my sister,’” McConnell-Miller said. “That’s the first thing they say, then, ‘How do you work with yours?’ And my answer typically is, ‘Well, your sister’s not Suzie.’”

Sometimes the sisters find themselves facing off against their older brother Tom when the Panthers take on IUP in exhibition games — which Pitt has won for the last three years. In moments like these, the family environment can make the game difficult.

“We all know what it’s like to be in this profession, and we never, ever want any one of us to lose on any occasion,” McConnell-Miller said. “Then for it to be at the hand of you and your team and your success, you just never want that.”

Tom, on the other hand, sees it as a chance for his team to learn from a strong opponent and to grow as players. He knows his sisters hate it, but every year, it’s one of the games he enjoys most. It reminds him of how much respect he has for his sisters as players and coaches.

“They’ve done some great things in basketball together as players, so I think it’s only fitting to see them on the sideline together,” Tom said. “It’s tremendous. I love what they’re doing and building at Pitt.”

Jordan and Madison — McConnell-Serio’s daughters — were both stars at Upper St. Clair High School, but neither wanted to continue playing in college. According to McConnell-Serio, her daughters wanted to focus on just being students.

“I wasn’t going to play, but I obviously missed it,” Jordan said. “Then they were down to eight or nine players, and she said, ‘Jordan, do you just want to walk on? We just need a body.’”

So Jordan joined the team as a sophomore in 2014 and appeared in 17 games on the Panthers’ 2015 NCAA Tournament team before quitting after the season to focus on academics.

When Madison got to Pitt in 2015, she too realized how much she missed basketball.

Two months into her first year, she began working out and practicing with the women’s team. She took on a reserve role with the team for the 2015-16 season, but when the team experienced a wave of injuries and her mom needed someone to fill in, she took full advantage.

McConnell-Serio said she sometimes sees a little bit of her own game in her daughter.

“I know there are times when I’ll joke in practice when she makes a play or makes a pass or hits a shot, and I’ll joke and say, ‘The apple doesn’t fall far from the tree,’” McConnell-Serio said. “I mean, I think we’re different. She is her own player. She didn’t really grow up watching me play. She was a baby when I was playing in the WNBA.”

Both Serio sisters experienced playing for both her mom and dad. In her senior year at Upper St. Clair, her dad Pete was her head coach. She said it’s a completely different experience playing for her mom.

“My mom is definitely a lot more intense and competitive,” Madison said. “My dad was more of an emotional coach and got to you and gave you emotional speeches, but my mom is more fired up and intense than my dad was.”

Basketball is an intensely familial sport for the McConnells. It’s taught them how to compete and handle successes, failures and challenges. It’s something they’ve used to teach their kids more than just basketball knowledge.

“Above the game of basketball, coaching is, in my opinion, one of the greatest professions that one can ever be a part of,” McConnell-Miller said. “I love the fact that they see Suzie and I as females working in this profession … being that type of role model for our children is extremely important, and if they choose to do this one day, they know what they’re getting themselves into.”