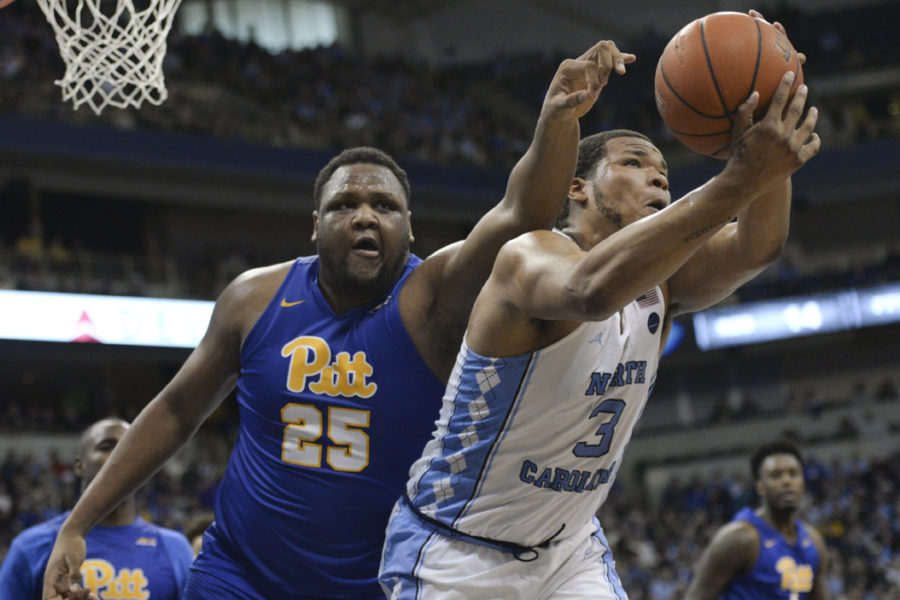 Pitt center Rozelle Nix (25) ignited the crowd with a huge block against North Carolina, but it wasn't enough as the Tar Heels rolled to an 85-67 win. Anna Bongardino | Staff Photographer

A little less than a month ago, the Pitt men’s basketball team played one of its best games of the season in an 80-78 loss against the North Carolina Tar Heels.

On Senior Day on Saturday at the Petersen Events Center, the Panthers (15-14 overall, 4-12 ACC) gave no such scare to the No. 8 Tar Heels (25-5 overall, 13-3 ACC). North Carolina held a two-point lead late in the first half before exploding into the break on a 10-0 run and cruising through the second half to a dominant 85-67 win.

“I feel bad for our seniors. I certainly didn’t want them to go in this fashion,” Pitt head coach Kevin Stallings said. “They’ve meant a lot to this program and have accomplished a lot both individually and as a group.”

Tar Heels junior forward Justin Jackson was an unstoppable force in this one, hustling for loose balls, hitting several backbreaking 3-pointers and leading all players 23 points. Seniors Michael Young had and Jamel Artis led Pitt with 17 points apiece in their final home game.

Pitt took its first lead of the game right after the timeout on a 3-pointer by sophomore guard Cameron Johnson. Two more 3-point baskets from Young and Artis stretched the Panthers’ lead to six with 12:44 left in the half.

UNC quickly responded, going on an 8-0 run in barely a minute to retake the lead, 19-17. With 7:38 to go, the Tar Heels extended their advantage to 24-19 on a layup by forward Kennedy Meeks.

Despite not scoring a field goal for almost eight minutes, the Panthers stayed close though. They cut the deficit to just one with 4:28 to go after a pair of free throws from senior guard Chris Jones.

The Tar Heels then surged to close the half, going on a 10-0 run over the last 2:38 to take a 40-28 lead into the locker room. Jackson scored six of the 10 points on a pair of 3-pointers and led all scorers at the break with 13 points.

“That was a tough stretch for us. Jackson hit two really big shots that were kind of contested and kind of just knocked them down,” Jones said. “I feel like that hurt us a little bit, but we had chances in the beginning of the second half where we could have made a run.”

UNC had a ton of success on the boards in the first 20 minutes, outrebounding Pitt by a 21-12 margin, including an 11-5 edge in offensive rebounds. The Tar Heels held an 11-4 lead in second-chance points at the half, as the extra opportunities appeared to wear on the Panthers’ defense.

Meeks started the second half with a layup for UNC, but Pitt came right back with the next six points on two free throws from Young followed by back-to-back fast break dunks by Johnson. The 6-0 run ignited the Oakland Zoo crowd, but Jackson silenced Pitt’s fans by pushing the Tar Heels’ lead back to 11 on a 3-pointer with 15:39 left to play.

“We came out at the start of the second half and got a couple steals and a got couple of breakaway layups,” Stallings said. “We just couldn’t follow it up with any rebounds, and we would get them to miss but they would get second and third tries and get it in the basket.”

The teams traded runs over the next few minutes, and after a 3-point play by Artis with 7:38 left, the Tar Heels led 67-56. North Carolina responded again, scoring seven unanswered points to make it 74-56.

UNC took a 20-point lead moments later on a 3-pointer by Jackson, putting the game well out of reach for the Panthers. The Tar Heels easily closed the game out, winning 85-67.

“We were beaten by a better basketball team. They’re better than we are. They’re deeper than we are,” Stallings said. “They did what they do very well today.”

Pitt’s lack of height inside really showed in the contest, as the Tar Heels manhandled the Panthers on the boards all game long. UNC led by 20 in the rebounding category, collecting 24 offensive and defensive rebounds each while Pitt finished with only 28 rebounds total. This led to a 28-9 advantage in second-chance points, the deciding factor of the game.

“They’re one of the best rebounding teams in the country. We knew that coming in,” Jones said about the Tar Heels, who lead the NCAA in rebounds and rebounding margin. “It’s different when you get out there and they’re kind of just reaching over your back and getting those balls.”

Artis said the team still hasn’t ruled out a late-season run through the ACC Tournament despite another crushing loss.

“We can’t give up right now,” Artis said. “We still have a lot of confidence in ourselves … we’re not going to stop working.”

Pitt will travel to Atlanta, Georgia, to take on the Georgia Tech Yellow Jackets at 9 p.m. Tuesday, Feb. 28.