Panthers’ season ends in 72-60 loss vs. UNC at ACC Tournament 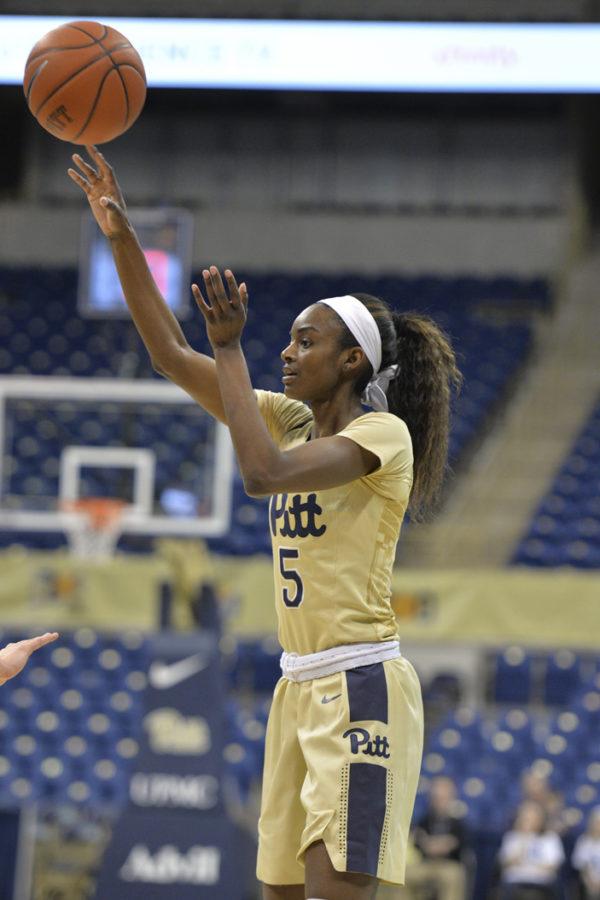 Cherry scored a career-high 32 points in UNC’s 72-60 win over the Panthers in the opening round of the ACC Tournament Wednesday night in Conway, South Carolina. Her ability to knock down long-range shots from well beyond the arc made the difference in the game, as she finished 5-of-7 from 3-point range.

Pitt secured its first-ever ACC Tournament win last season in a thrilling opening-round win against the Tar Heels — but not before Cherry sunk a buzzer-beating 3-pointer to send the game to overtime.

Although four Panthers scored in double figures, no one could match Cherry’s individual output.

Pitt’s offense started out hot, scoring at will on its way to 41 first-half points. The team appeared headed for its fifth straight win over UNC, but Cherry’s long-range barrage put an end to the Panthers’ streak — and their season.

Tar Heels guard Paris Kea scored the game’s first four points on a jumper and a layup. Pitt sophomore forward Kauai Bradley got the Panthers on the board with a 3-pointer, the first of her 12 points in the first quarter. But she still wasn’t the leading scorer after an action-packed opening 10 minutes, as Cherry racked up 14 points in the first.

Cherry drained a three to give the Tar Heels a 9-3 lead, but her night was just getting started.

First-year guard Alayna Gribble drilled a 3-pointer 10 seconds into the second quarter to give Pitt its first lead, 25-24. A jumper from junior point guard Aysia Bugg and layups from Bradley and Harvey-Carr finished a 13-0 Panthers run and gave them a seven-point lead with 6:58 left in the first half.

The teams went back and forth for the remainder of the first half, and Pitt took a 41-37 lead into halftime. Cherry led all players with 16 points at the break while Bradley led the Panthers with 12.

UNC kept up the offensive explosion in the second half, starting the third quarter on a 10-0 run. Pitt couldn’t keep up, going nearly four minutes without scoring until first-year point guard Jasmine Whitney converted a layup with 6:04 left in the quarter.

Another layup by Whitney cut UNC’s lead to two with 3:43 remaining in the third, but the Tar Heels scored the final eight points in the quarter to take a 59-49 lead into the fourth. Cherry contributed back-to-back 3-pointers in the run — including one from NBA range — and had already tallied 27 points by the end of the quarter.

Kea nailed a couple of free throws to start the final quarter, then followed a Wise jumper with two more to give UNC a 63-51 lead. A three from Wise trimmed the gap to single digits, but the Panthers continued to struggle on offense.

Bugg hit a jumper to cut Pitt’s deficit to eight with 2:15 remaining, and the Tar Heels missed several free throws, giving the Panthers a chance to come back. But they couldn’t make a shot until it was too late, missing five of their last six shots and falling by a 72-60 score.

Pitt showed signs of improvement early on this season, starting 3-3 in ACC play. But the Panthers ran into a tough stretch against a slew of ranked teams, losing nine of their last 10 games. The team concludes its season with a 13-17 overall record, almost identical to its 13-18 mark from last year.