Pitting in person: 5 games fans would rather forget 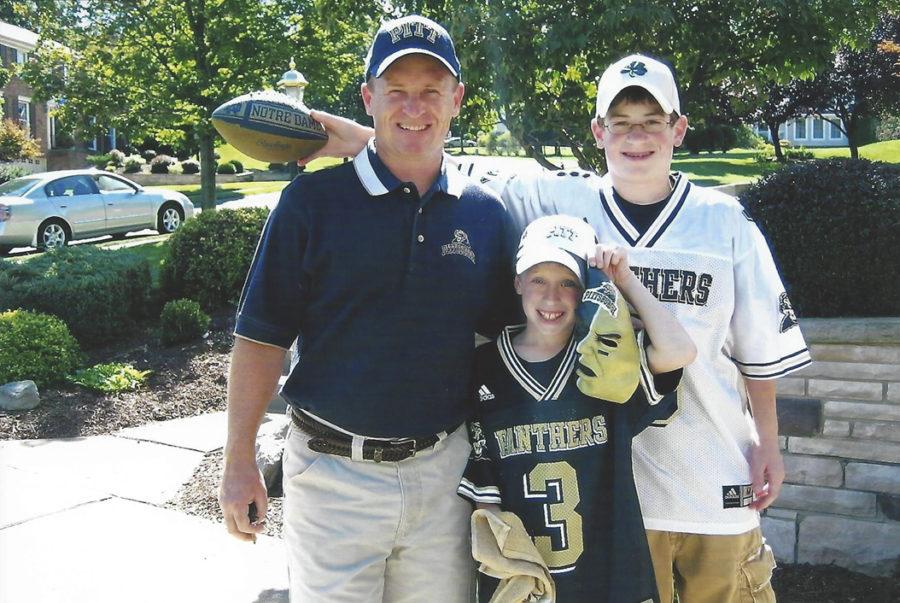 Ryan Zimba (center) pictured with his father and brother outside their home before a Pitt football game in 2007. Courtesy of Ryan Zimba

Last week, as I watched Pitt’s men’s basketball team surrender a 19-point lead against Wake Forest, I felt something all too familiar.

I was ready for the end-of-game trainwreck, mostly because I’ve seen the same situation play out year after year since I was 5 years old.

I’ve been going to Pitt games with my dad since 2003 — sporting events formed the basis of our bond.

Throughout the last 14 years of watching and writing about Pitt sports, I’ve come to realize one constant: No matter how good the teams are, they always find a way to lose in a heartbreaking fashion.

Others have noticed it too. This type of late-game play has garnered the term “Pitting” among the Panthers fan base.

Pitt’s SB Nation affiliate Cardiac Hill defined the term after the football team’s loss to Duke in 2014 as “1. To Pitt 2. To utterly provide hope to an apathetic fan base only to snatch it away at the last possible second 3. To find as many ways to lose games as possible 4. To play egregiously bad in one or multiple phases of the game for no apparent reason.”

I was in the seats at Clemson Memorial Stadium when kicker Chris Blewitt hit the game-winning 48-yard field goal to knock off the eventual-National Champion Clemson Tigers on Nov. 12. When the ball went through the uprights, my first thought wasn’t, ‘Pitt just won this game!’ Instead, I thought, ‘They still have six seconds to mess this up.’

The Panthers hung on to win that one, but that game was more the exception than the rule.

In light of Pitt’s Feb. 22 loss to Wake Forest — and this entire basketball season — I decided to revisit some of the most memorable moments of “Pitting” I’ve experienced in person. Thus, the list won’t include such historic moments as the football team’s collapse in the 2015 Armed Forces Bowl, or the men’s basketball team’s last-second loss in the 2009 Elite Eight, among countless others.

This was my first time witnessing Pitt fail to win a game it had no business losing.

The Panthers started the season as a ranked team and legitimate contenders in the Big East. Meanwhile, Bowling Green was a mid-major school competing in the less-established Mid-American Conference.

The loss had an extra sting considering the team’s previous season ended with Pitt’s biggest win in my lifetime — a 13-9 upset of the No. 2 West Virginia Mountaineers.

For the first time in a long time, a real feeling of excitement surrounded the program. Running back LeSean McCoy was set to embark on another great season and head coach Dave Wannstedt seemed poised to restore the program into a national contender.

But with this loss, the progress came to an emphatic stop — and it wouldn’t be the last of Wannstedt’s teams to make the cut.

This game should have been called before it even started. After 10 minutes, the Panthers were already down 12. The team only made four shots in the first half, shooting 16 percent from the field. At the break, Pitt trailed by a whopping 33 points.

I didn’t think the second half would be anywhere near as bad, but I was wrong.

The Cardinals outscored the Panthers by 22 in the final 20 minutes, all while playing their substitutes and walk-ons for the majority the second half. When the game came to an end, Pitt only tallied 51 points — which Louisville was able to reach in the first half alone.

This was Pitt’s biggest loss since a 93-point blowout defeat to Westminster in 1906, 15 years after the game of basketball was invented. It served as a message to all fans, telling them just how far the program had fallen.

With four seconds to go, Pitt forward Talib Zanna hit a pair of free throws to put Pitt up 56-55. Then, Syracuse forward Tyler Ennis dribbled right down the court, pulled up and nailed a 35-foot heave to extend the Orange’s unbeaten record to 24-0.

This one was especially painful for me because my dad, a Syracuse alum and lifelong fan, was sitting right next to me in his trademark neon orange sweater. He cheered after the shot. I slumped down in my seat, embarrassed for the school I would one day attend.

I didn’t leave the stadium until it was nearly empty, left wondering how another game slipped away.

The return of the beloved Pitt script logo to the football team’s helmets signaled a return to the glory days for many fans. For me, it marked the worst I’ve ever seen a Pitt sports team play — and that says a lot.

The Panthers lost fumbles on each of their first five possessions, including a stretch of four on six plays. This tied the NCAA record for most fumbles in a quarter, and it only took Pitt eight minutes and 30 seconds to accomplish the feat.

The second turnover summarized the game best, when running back James Conner sprinted 74 yards down the left sideline only to get stripped at the 1-yard line and fumbled it out of the end zone for a touchback.

After a mere 5:16 of game time, the Panthers found themselves down 28-0. Even though the teams each scored 28 points the rest of the way, the game had long since been decided.

To this day, I’ve never felt so utterly hopeless after a sporting event.

It was the final week of the season, with the winner of the game taking home the Big East Championship and the right to play in a BCS Bowl.

It was a cold, snowy afternoon, but Pitt fans packed the Heinz Field stands — the only time I’d seen that happen outside of games against West Virginia, Notre Dame or Penn State. The Panthers held a commanding 31-10 lead with 1:26 to go in the second quarter but the team found a way to lose in the most excruciating fashion.

With 33 seconds left in the game, Bearcats quarterback Tony Pike threw a touchdown pass to Armon Binns to give Cincinnati the 45-44 win. The one-point difference? A botched snap on Pitt’s last extra point attempt after scoring a go-ahead touchdown with 1:36 left.

I stormed out of the stadium that day and spent the whole ride home in silence. When I got home, I went straight up to my room, where I spent the remainder of the evening staring at the wall and asking myself, “How did Pitt lose that game?”