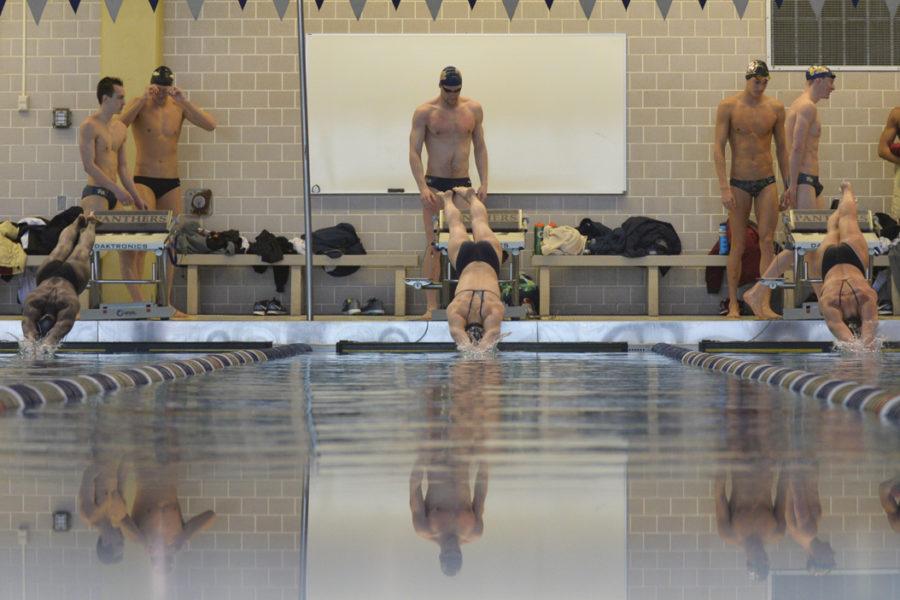 The Pitt men's swimming team finished up the 2017 ACC Championships on Thursday with a 10th-place finish. John Hamilton | Visual Editor

The Pitt men’s swimming team continued to make history Wednesday and Thursday night in Georgia as the 2017 ACC Championships came to a close.

The Panthers finished in 10th place at Georgia Tech’s McAuley Aquatic Center in Atlanta with 513 team points. This score broke the team’s previous high score by 144.5 points, according to a Pitt Athletics press release. The team increased its scoring output from last year by 168 points, representing the second-biggest leap in the conference this year after the third-place Notre Dame Fighting Irish.

The North Carolina State Wolfpack took home the team title for the third straight season with 1,297.5 points, but Pitt head coach John Hargis seemed pleased with the Panthers’ performance in his first ACC Championships with the team.

“This was a really memorable meet for our team, and I’m very happy that the seniors finished with such a successful and fun experience,” Hargis said Thursday in a press release. “This was an important step forward for our program.”

Machado broke the Panthers’ program record in the 100 backstroke Wednesday morning by posting a time of 46.58. He narrowly missed out on breaking his own mark in the final later that night when he touched the wall in 46.65 seconds.

“Today was truly another amazing day for Pitt swimming,” Hargis said Wednesday in a press release. “To set five school records with three top-10 finishes and an A finalist — all in one day — is a huge step forward for our program.”

First-year swimmer Eben Vorster set another school record on Wednesday with a time of 1:36.17 in the 200 free C final for an 18th-place finish. Sophomore Brian Lovasik finished in 1:37.01 in the B final of the same event, giving him a 15th-place finish.

Machado, Larson, Vorster and Lovasik combined to set Pitt’s fifth school record of the day in the 400 medley relay, placing ninth with a time of 3:10.57.

More school records fell on Thursday as Vorster continued his assault on the Panthers’ record books with a time of 1:44.58 in the 200 butterfly, taking home 10th place in the event.

“The toughness and heart we showed allowed us to compete all week right with the best in the ACC,” Hargis said Thursday in the press release. “It was great to see so many records broken and memories made.”