Pitt baseball drops three out of four in South Carolina 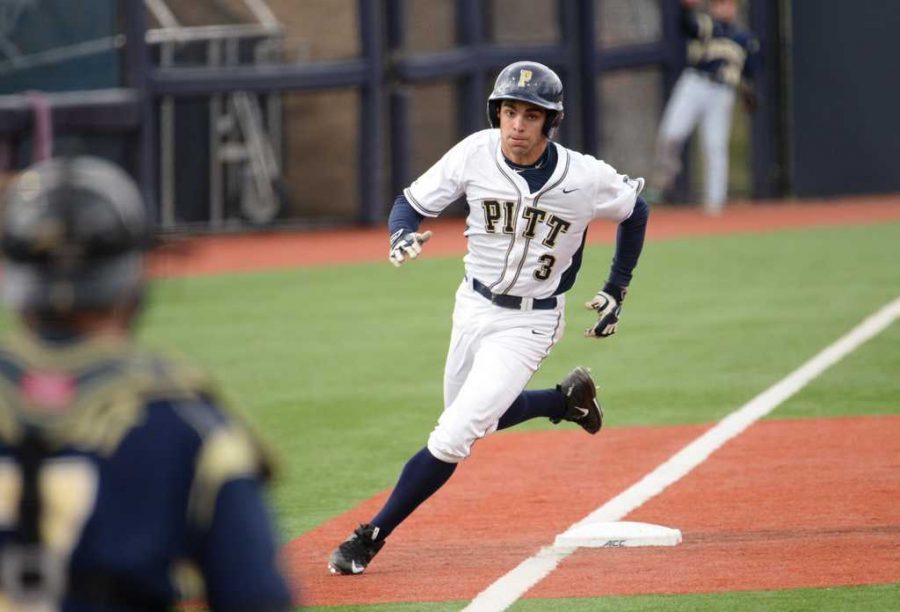 After a strong start to nonconference play, the Pitt baseball team started to show signs of its inexperience last weekend.

The Panthers (7-4) dropped three out of four games against mid-major opponents, scoring a total of only 10 runs over the weekend in Spartanburg, South Carolina.

“We got some decent work in this weekend, but it was a disappointing 1-3 result in the end,” Pitt head coach Joe Jordano said Sunday in a press release. “Breaking it down, our pitching and defense played well on the whole and gave us a chance to win almost every game. But our offensive approach needs to work on being more consistent.”

Wofford got on the board first on Friday, taking a 2-0 lead against Pitt in the second inning on left fielder Andrew Orzel’s two-out, two-run single. The Panthers got a run back in the top of the fifth on a sacrifice fly by senior catcher Manny Pazos, but the Terriers answered with a run in the bottom half.

Right fielder Mack Nathanson then led off the bottom of the sixth with a solo home run, and Wofford took a 4-1 lead into the top of the ninth inning.

Pitt put together an impressive rally in the ninth, loading the bases with two outs on a pair of singles and a walk. Junior third baseman Nick Banman delivered a two-run single to make it 4-3, but Pazos flied out to center field to end the game.

“We played a really solid Wofford team today,” Jordano said Friday in a press release. “They had a strong fundamental game with a really good pitching performance. I’m proud of the way we battled until the end and had a shot to complete the comeback in the ninth.”

Redshirt junior center fielder Frank Maldonado brought first baseman Caleb Parry home with an RBI triple, then Maldonado came home to score on an RBI groundout by Banman. First baseman Charlie Carpenter got a run back for USC Upstate with an RBI single in the bottom half, but Pidich silenced the Spartans’ bats the rest of the way.

Pitt redshirt senior left fielder Jacob Wright tacked on an insurance run with an RBI single in the top of the ninth, and junior right-hander Isaac Mattson shut the door with two perfect innings of relief.

Pidich went seven innings while allowing one run on four hits and one walk to pick up his second win of the season.

“Matt Pidich made a ton of big pitches when he needed to in the first game today,” Jordano said Saturday in a press release. “He worked fast, threw strikes and our defense played clean behind him. Matt deserved that win.”

USC Upstate started game two of the doubleheader with a pair of runs in the first inning. The Panthers got a run back in the top of the second, then tied it at two in the top of the third on Maldonado’s solo home run.

The Spartans quickly broke the tie in the bottom of the third, scoring four runs on four hits to take a commanding 6-2 lead.

Pitt kept fighting, cutting into the deficit with a solo home run by senior shortstop P.J. Demeo in the fourth and an RBI double by Parry in the fifth. But USC Upstate scored in the sixth and seventh to stretch its lead back to four, and held on for the 9-5 win.

“It’s always a challenge to win both games of a doubleheader,” Jordano said of Saturday’s second game in the press release. “You have to give credit to Upstate. Every time we were gaining momentum, they came right back. Those guys in the middle of their lineup can certainly hit.”

Senior right-hander Josh Falk took the mound for the Panthers against Wright State on Sunday and engaged in a pitchers’ duel with Raiders lefty Danny Sexton.

“Josh Falk gave us seven solid innings and did a really nice job on the mound,” Jordano said Sunday in a press release.

Falk allowed three runs on six hits with five strikeouts and no walks over seven innings of work. But Sexton was even better, holding Pitt to one run on three hits over eight innings in Wright State’s 3-1 win to improve his record to 3-0.

The Raiders got to Falk first for two runs in the top of the third inning on a pair of RBI doubles. Banman answered back with a solo homer for the Panthers in the fourth — his second long ball of the season — but that was all the offense Pitt could muster on the day.

Wright State tacked on an insurance run in the top of the seventh and held on for the 3-1 win.

“This was a good, solid baseball game with strong pitching on both sides and fundamental defensive performances from both teams,” Jordano said Sunday in the press release.

The Panthers will open up ACC play against the No. 5 Louisville Cardinals at 6 p.m. Friday, March 10, in Louisville, Kentucky.