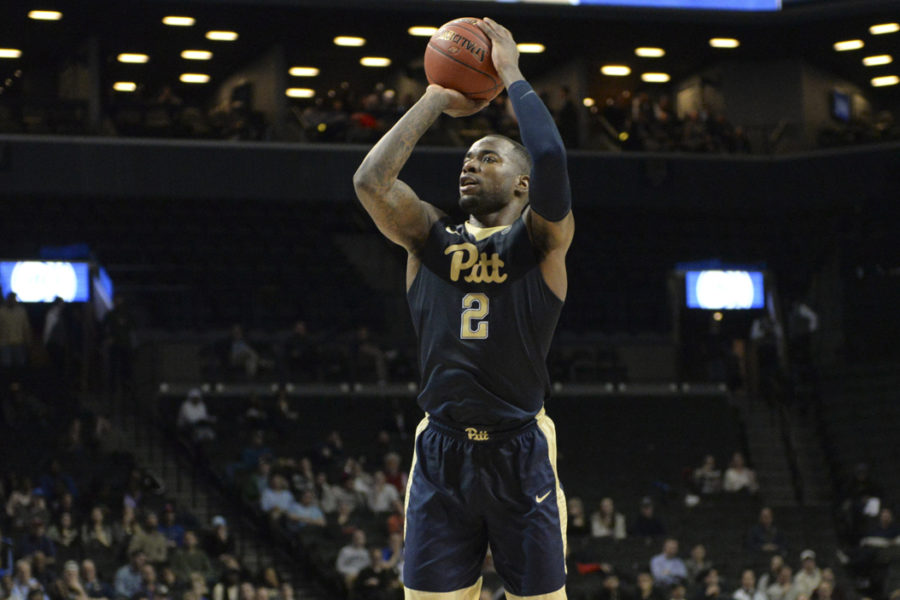 Pitt senior forward Michael Young led the Panthers with 17 points in a 61-59 win over Georgia Tech in the first round of the ACC Tournament. John Hamilton | Visual Editor

It wasn’t easy or pretty, but the Pitt men’s basketball team held on to extend its season for at least another day.

The Panthers (16-16) survived a last-minute rally from the Georgia Tech Yellow Jackets (17-15) to pull out a 61-59 win Tuesday night in the first round of the ACC Tournament at the Barclays Center in Brooklyn, New York.

“We didn’t play great, but I don’t think you look great too often against Georgia Tech,” Pitt head coach Kevin Stallings said. “I think they scrum the game up a little bit. I think that’s part of the beauty in how they play.”

“We were upbeat, and came out ready to play,” Jeter said. “The sole focus was to just win by any means.”

Pitt controlled the opening tip, and Jeter started the scoring with a 3-pointer from the top of the key for the Panthers. Georgia Tech responded with a quick jumper, but Young added two free throws and a layup after a nifty spin move to extend the Panthers’ lead.

Jeter threw down a powerful slam dunk right out of the break, then Young added a long jumper to give Pitt an early double-digit lead. Lammers hit a jumper on Georgia Tech’s next possession to stop the Panthers’ 10-0 run.

The Yellow Jackets started to find a rhythm on offense, trimming the deficit to six on a 3-point play by guard Tadric Jackson.

Minutes later, senior Jamel Artis drove the length of the floor for a contested layup and 3-point play of his own, then added a jumper to push the Panthers’ lead back to six. But Georgia Tech forward Quinton Stephens nailed a 3-pointer to make it a 20-17 game at the third media timeout.

Pitt maintained its slim lead after the timeout, with help from an emphatic dunk from Young, his second of the game. Jeter then absorbed contact and finished a tough layup for a 3-point play to give the Panthers a 27-21 lead.

Stephens and Pitt senior guard Chris Jones traded jumpers, then Stephens hit a corner three with Luther’s hand right in his face to make it a three-point game. Panthers sophomore guard Cameron Johnson missed a layup just before the buzzer to keep it at 29-26 at the half.

Jackson led all scorers with 11 points at the break. Young had 10 points and four rebounds to lead the way for Pitt, while Stephens and Jeter had eight points apiece in the first half.

A quick jumper by Jackson started the second half, and Stephens made another three after a tough layup by Jeter to tie the game at 31.

The Panthers jumped back on top, but sloppy ball-handling led to a turnover and allowed the Yellow Jackets to take their first lead of the game with a little less than 14 minutes remaining. Pitt had a great opportunity to take the lead next time down the court, but Jeter missed a putback dunk and Young missed a layup.

First-year guard Josh Okogie converted a 3-point play to stretch Georgia Tech’s lead to four with just over 12 minutes to play, then Jones and redshirt junior guard Jonathan Milligan buried a pair of 3-pointers to put the panthers back on top. Milligan’s three represented the first and only bench points of the night for either team.

Jeter checked back into the game after taking a hard fall and immediately converted a layup, then Jones added another three to give the Panthers a seven-point lead. Yellow Jackets guard Josh Heath then drained a jumper to end Pitt’s 11-0 run and start a run for Georgia Tech.

Lammers made a tip-in after multiple offensive rebounds to trim the Yellow Jackets’ deficit to three, then four straight free throws put Georgia Tech back on top 49-48 with just under five minutes left in the game.

Young put the Panthers back in the lead with a contested 3-pointer, but Jackson tied things up with a jumper. Artis then hit a corner three on Pitt’s next possession — his first points of the second half — to put the Panthers up 54-51 with 3:16 remaining.

A strong layup from Young put the Panthers up five, then two free throws from Artis made it 58-51 with 43 seconds to play. But this one wasn’t over yet.

Stephens made a pair of free throws with 34 seconds left, then Okogie made a layup six seconds later after Pitt threw away the inbounds pass. All of a sudden, it was a one-possession game.

Jones made one of two free throws at the other end, then Okogie made another layup to make it 59-57 with 6.4 seconds remaining. The Yellow Jackets then fouled Johnson, who made his first attempt from the line but missed the second, giving Georgia Tech a chance to tie the game.

But Artis wisely fouled Okogie with two seconds left as he sprinted down the court, sending him to the foul line so he couldn’t attempt a game-tying 3-pointer.

“When he was coming down full speed, it almost went by my head like, ‘Alright, I’ve got to play defense — no, I’ve got to foul,’” Artis said. “So, I fouled him real quick. We don’t want to give them a three, so that was a smart play.”

He made both foul shots, but the Panthers got the ball in to Artis, who missed his first free throw then made the second even though he tried to miss it on purpose.

The Yellow Jackets then had time to attempt a full-court inbounds pass with 1.4 seconds left, but Pitt knocked it away and held on for the 61-59 win.

“This is it for us,” Young said. “The regular season is over. We can’t get [any] of those games back. We’ve just got to move forward. We believe, our coaches believe, this whole program believes we can do something special in this tournament. That’s what we came here to do.”

The Panthers will move on to play the No. 6 seed Virginia Cavaliers in the second round of the ACC Tournament Wednesday night at 9 p.m.