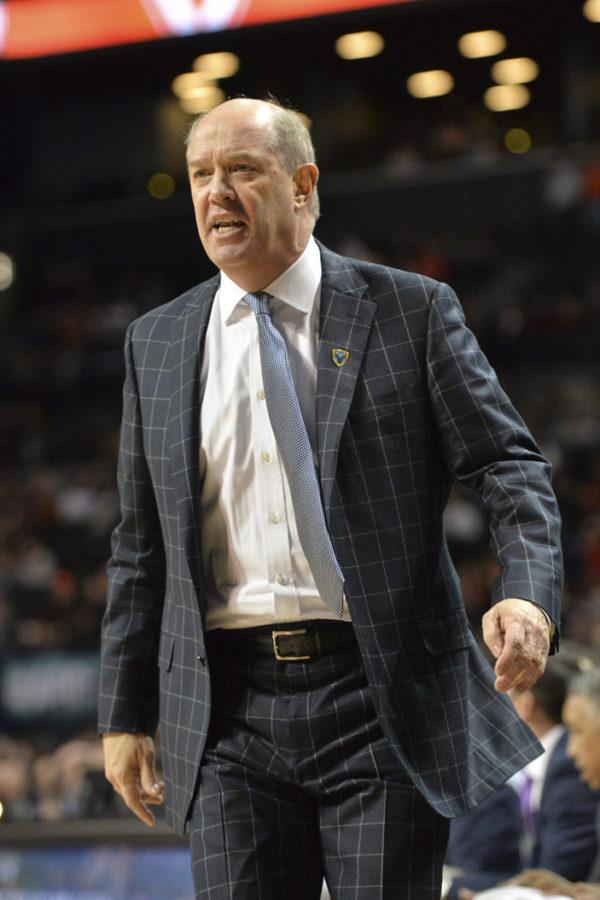 Pitt head coach Kevin Stallings will have to turn things around with an almost entirely new roster next season. John Hamilton | Visual Editor

Now that we know the season is over for Pitt’s men’s basketball team — with no postseason appearance and no winning record for the first time in 17 years — one question remains.

Where do the Panthers go from here?

Some have called for the axing of head coach Kevin Stallings after just one year on the job, but that’s not the proper course of action. Yes, Stallings inherited a team with several talented, experienced players and finished next-to-last in the ACC while overseeing some of the worst losses in program history.

But former head coach Jamie Dixon left him with virtually no depth off the bench, no true point guard and no true center or post presence. If not for two costly injuries to senior forward Michael Young and junior forward Ryan Luther, the season’s solid start may have continued into conference play and led the team back to the postseason.

I’m not defending or sticking up for Stallings. No matter how you slice it, his first season was a failure. Hell, it was a borderline disaster. But he deserves a chance to coach his players for at least a year before the program looks elsewhere for a new head coach.

In case anyone forgot, Pitt’s last losing season came in the 1999-00 season, when the Panthers finished 13-15 in Ben Howland’s first year as head coach. Pitt improved to 19-14 in his second season, then went 29-6 and 28-5 in Howland’s next two years before he left for UCLA and passed the program off to Dixon.

No one is expecting Stallings to be the second coming of Howland, but at least Pitt has a precedent for a turnaround after a dismal debut.

With seniors Young, Jamel Artis, Sheldon Jeter and Chris Jones graduating, Pitt is losing nearly three-fourths of its scoring from this season. Replacing Young and Artis will be especially hard, as the two All-ACC performers led the conference with a combined 38.3 points per game — more than half of the team’s offensive output.

But those aren’t the only departures the team will face. Stallings dismissed first-year point guard Justice Kithcart prior to this year’s regular season finale, and sophomore guard Crisshawn Clark revealed his intention on Monday to transfer after the season.

And judging by the size of next year’s crop of players, more than six players will be leaving after the season.

As of now, the Panthers have four recruits already signed to the 2017 class, with three more unofficial verbal commits. 6-foot-2 guards Marcus Carr and Aaron Thompson, 6-foot-9 power forward Terrell Brown and 6-foot-5 guard Jared Wilson-Frame have all signed National Letters of Intent to enroll at Pitt in 2017.

Meanwhile, 6-foot-5 forward Shamiel Stevenson and 6-foot-10 center Peace Ilegomah have announced their intentions to join the Panthers in the fall. 6-foot-1 guard Troy Simons of Polk State Community College in Florida also plans to transfer to Pitt, and Stallings and his staff are still looking to add to the class.

With the exception of Ilegomah and Simons, who aren’t rated by Rivals, the Panthers’ 2017 class is comprised entirely of three- and four-star recruits. Carr is the sole four-star prospect of the group according to Rivals, but both he and Thompson have the potential to earn starting spots in Pitt’s backcourt in 2017.

Sophomore Cameron Johnson will undoubtedly start at shooting guard, but the rest of the Panthers’ rotation is a mystery. Luther will be the team’s only senior next year, and although Stallings may have no choice to make him a starter, he’s better suited as the team’s sixth man.

There will be plenty of opportunities for the 2017 class to contribute immediately. Whether or not they can take advantage of those chances will make or break the Panthers’ 2017 season.

The future of the program — and the stability of Stallings’ job status — will depend on it.