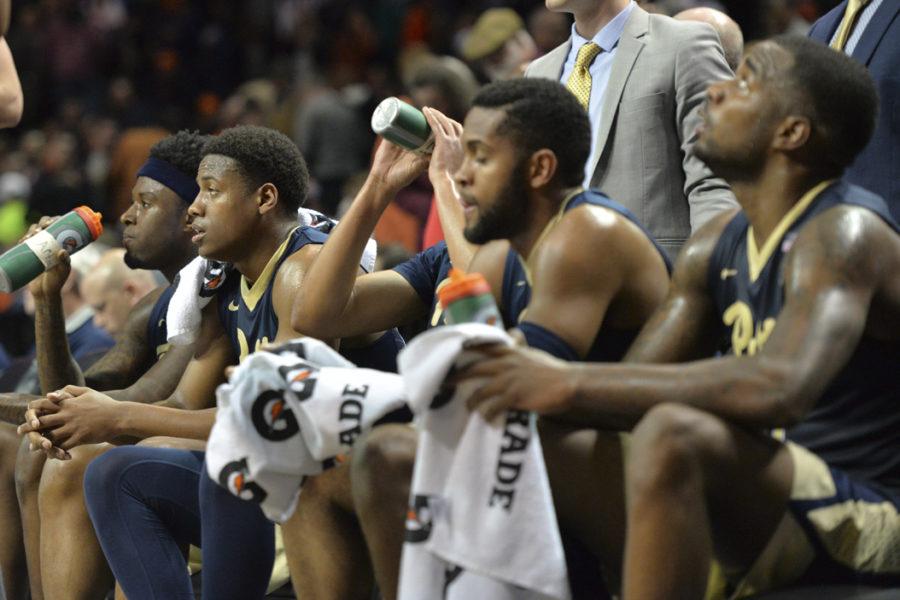 When the visitors’ locker room inside the Barclays Center opened to reporters moments after Pitt’s season-ending 75-63 loss to Virginia in the second round of the ACC Tournament, the room was silent.

The post-game spread of food and drinks went mostly untouched. As the players sat side by side at their cramped lockers, some took off their sneakers and put away their Pitt script gear for the last time of the season, while others did so for the last time in their career.

Some stared straight ahead, reflecting on a bitter end to a lost season.

Four players in particular seemed more distraught than others — the team’s four seniors who knew for sure they had played their final game in a Panthers uniform. There would not even be a postseason run in the National Invitation Tournament or College Basketball Invitational for Jamel Artis, Sheldon Jeter, Chris Jones and Michael Young. Just like that, a few minutes past the stroke of midnight on a Thursday in Brooklyn, New York, it was over.

After taking some time to reflect, the four seniors opened up about future plans, their Pitt careers and how it feels knowing they’ve played their final game as Panthers.

Of all the players in Pitt’s locker room, Sheldon Jeter seemed to be taking the defeat the worst. He was still wearing his game uniform, staring idly at the ground. He took long pauses to gather his thoughts before answering questions.

“It’s a lot of reflection, looking back on things,” said Jeter, an administration of justice major. “I wish it would have ended differently, but it didn’t. I’m just trying to come to grips with it, that’s all.”

After rebounding from a slow start to his senior season, Jeter played the best basketball of his career down the stretch, including a 29-point performance in Pitt’s 80-66 win over then-No. 17 Florida State. He tied his personal-best mark of 8.1 points per game this season while leading the team with a career-high 7.3 rebounds per game.

Still, he wasn’t satisfied with his performance in his final game — in which he finished with five points and seven rebounds in 31 minutes — or his season performance as a whole.

The 6-foot-8 senior forward from Beaver Falls, Pennsylvania, attempted to return home to play for the Panthers after spending one year playing at Vanderbilt under Pitt’s current head coach, Kevin Stallings.

Stallings blocked Jeter’s transfer, forcing him to sit out a year at Polk State Community College in Florida before spending the last three seasons at Pitt — the last of which he played under his former coach.

“No matter what the circumstances were, I just always played the cards that I was dealt,” Jeter said. “When things got hard, I didn’t try to run away. I feel like I tried to meet every single challenge, and it just didn’t end how I wanted it to.”

“It’s tough,” Jones said. “That’s all I can really say. It’s not something that’s easy to deal with, obviously. When you’re a senior you want to go out with a bang. It’s hard.”

Jones, standing at 6-foot-6, averaged 7.2 points, 3.0 rebounds and 2.2 assists per game in his final season, while scoring 6.1 points per contest in 129 games over his four-year career. He said he’ll look back fondly on his time at Pitt despite the disappointing finish.

Jones hasn’t yet decided where he’ll go from here. The communication major has only one thing on his mind now: graduation.

An avid TV and movie fan known to offer his opinions — and sometimes even ratings — on popular releases on Twitter, Jones didn’t rule out a future as a TV or movie critic.

“All I know is, after spring break I’m going to go to class, ” Jones said. “Stay posted. We’ll see,” he added with a smile.

Senior point guard Jamel Artis will go down as a bit of an enigma. He was one of the most dynamic, versatile and talented players in program history, but always seemed like he could have reached a higher, untapped level of play.

The 6-foot-7 senior flashed that potential earlier in the season with a 43-point game against Louisville, including a program-record 32 points in the second half. Still, going out without one final chance to experience March Madness left him wanting more.

“I wish this one would have went a little bit better,” Artis said. “I always want to play in the NCAA Tournament, so not making it this year … kind of hurts not playing a college basketball game again.”

In three years together with his teammate and best friend Michael Young, Artis comprised one half of one of the ACC’s most formidable duos. Their combined scoring average of 38.3 points per game led the conference in the 2016-17 season.

“I think me and Mike Young had a successful year. I wouldn’t want to play with any other guy,” Artis said. “He’ll probably go to a different team than me if we do get drafted. It’s going to be kind of hurtful not playing with him … hopefully we play in the summer league.”

Like Young, Artis’ basketball career is likely to continue beyond his days as a Panther, either in the NBA or overseas. The communication majors could have left after their junior season and entered the NBA Draft, but chose to stick around one more year to show off their skills.

Now it’s time for them to prepare to make the jump to the pros.

Senior forward Michael Young remained seated at his locker, answering questions with his trademark stoic expression as other players and reporters began filing out.

“Looking back on the last four years, I’m just thankful,” Young said. “To have met a lot of people, made a lot of great relationships either with players or coaches… that’s what I’m proud of.”

Young was almost at a loss for words when trying to express what his four years at Pitt playing alongside Artis were like.

“The fact that we might have played our last game together hasn’t really set in at this point,” Young said. “I’m thankful for him. He’s not blood, but he’s more than blood to me … Jamel is somebody that I’d die for, and no matter where we are, we’re never apart.”

With virtually no chance of the two playing professionally for the same team, Young said that won’t stop him from calling Artis every day to check on how he’s doing. If they do make it to the NBA, Young plans to check his best friend’s stats every day and watch every game he can.

A native of Duquesne, Pennsylvania, Young earned third-team All-ACC honors for the second year in a row after averaging a career-best 19.6 points per game in the 2016-17 season, along with 6.8 rebounds and 2.7 assists per contest.

The 6-foot-9 forward scored 648 points as a senior — the fifth-highest-scoring season in Panthers history — and he finished six points shy of becoming one of Pitt’s top-five scorers for his career. But Young values winning, so he doesn’t consider himself one of the very best to play for Pitt — though he does believe he’s part of the conversation.

“I didn’t win a lot so I wouldn’t put myself up there, but I would definitely say I’m one of those guys where when you’re talking about Pitt and Pitt’s history, you should mention me,” Young said. “Ten years from now, once people look back, I think I’ll be remembered as a Pitt legend, as a Pitt great.”