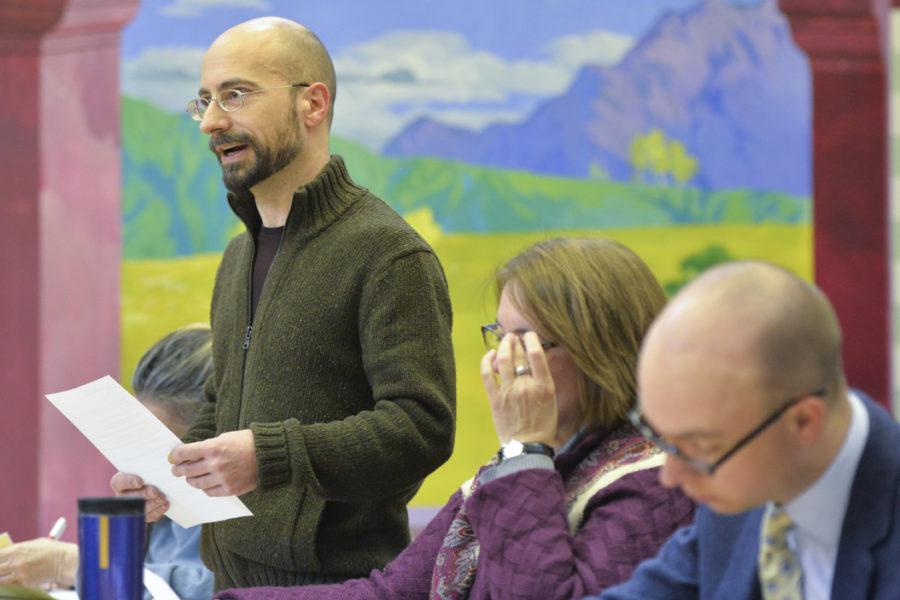 Pittsburgh Parking Authority is implementing a new digitalized parking system, rather than using sticker parking permits, as early as May 1.

John Fournier, director of enforcement and residential permit parking from the Pittsburgh Parking Authority, made the announcement at the monthly Oakwatch: the Oakland Code Enforcement Project meeting. The Oakland Planning and Development Corporation runs the public forum, where community members engage in a discussion with police forces, members of the mayor’s office, Pitt officials and guest speakers about enforcing code violations. The chairs of Oakwatch budgeted extra time Wednesday for discussion surrounding parking concerns, namely the alleged illegal trade of parking passes and overcrowding of parking in Oakland.

After taking notes about resident’s parking concerns, Fournier announced the new system in which Pittsburgh residents would apply online for parking rights, rather than the current system in which the PPA mails residents a physical parking permit that sticks to their car.

“There’s this convenience factor,” Fournier said. “And it also stops the black market.”

According to Fournier, the stickerless parking permits will be digital, held in a database and connected to residents’ license plates, eliminating any possibility for secondary sales of the physical permits. PPA enforcement vehicles will use a license plate recognition camera, allowing for them to check each car’s parking permit while driving, saving time and thus reducing the cost of policing.

“We will be able to enforce more areas more quickly,” Fournier said. “Those efficiency gains will allow us to have much more active enforcement.”

Fournier said the tentative starting date for the program would be May 1, and that the PPA would replace permits in different areas of Pittsburgh as they expire.

Before introducing the changes, however, Fournier said he wanted to hear the community’s ideas, leading to a stream of questions and concerns.

One woman said too many people were parking without proper parking permits through nights and weekends and asked for evening parking authority enforcement. Another woman said landlords were allowing too many students to live in homes, leading to too many parking permits and not enough space on the street.

“There’s a black market of handicapped placards,” Markowitz said. “The city needs to enforce it.”

One man told Fournier he wasn’t convinced the new system would save enough money or time to justify the confusion of having no physical permits. Residents wouldn’t be able to self-police if there was no visible proof on each car.

Fournier noted all the residents’ concerns in his phone, telling the crowd he’d make sure to check them later. Running over 15 minutes past the allotted time, Bob Kollar, 46, of Oakland, motioned for the meeting to move on. City police and Pitt police both spoke, giving brief reports on the past month’s crime. One officer said they’ve been monitoring social media to determine where parties are happening.

The crowd laughed, but as the meeting moved on into “property progress” discussion — an analysis of repeated Oakland building violations, such as unshoveled snow, unmowed lawns and unsafe building conditions — the tone of the room turned to anger.

While the crowd panned through a handout of Oakland homes that were violating code, one woman — whose brother’s property was listed as being abandoned and overgrown with weeds — began to shout, and claimed she was being harassed by the OPDC. She said no one from the OPDC had offered to help bring her property up to code when she was unable.

Rebekkah Ranallo, OPDC communications manager, said the OPDC was willing to purchase Oakland homes, bring them up to code and resell them to permanent home owners. Ranallo told the crowd she’d offered to purchase the woman’s property, but neither of the two could agree on what was fair.

After many community members jumped in, and some began shouting, the Oakwatch chairs stepped in and moved on to city council and Pitt Student Government Board announcements.

SGB member Arlind Karpuzi shared some recent initiatives happening on and off campus, such as the It’s On Us T-shirt Project and the Alternative Break program.

Kollar, in conclusion of what he said was his first meeting as a leader, said he “wasn’t expecting as much agitation,” but still thought it was a productive meeting. However, he said he would have liked to see a higher student turnout. Markowitz agreed and added that students “put a good vibe” in the community and meetings.

“We’re in an important, eclectic area, with eclectic residents,” Markowitz said. “And we’re all working together.”

A previous version of this story reported that Point Park police spoke at the meeting. This is incorrect. Only City police and Pitt police spoke. In addition, the previous version of the story reported that a woman owned a property that was violating Oakland codes. This is incorrect. The property in question belongs to her brother, not her. The story has been corrected to reflect this. The Pitt News regrets these errors.