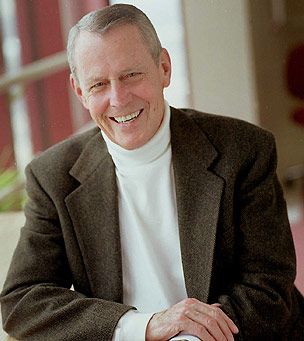 Thomas E. Starzl passed away on March 4 in his Pittsburgh home. Courtesy of University of Pittsburgh

Although Dr. Thomas E. Starzl is known in the Pitt medical community for his contributions to the organ transplant field, his grandson Ravi Starzl knows him as an ice cream connoisseur.

The elder Starzl was such a fan of ice cream that he would frequently eat it for dinner, his grandson said. He was partial to Blue Bunny, since it’s produced in his hometown of Le Mars, Iowa.

“Because he was concerned what he liked would go out of style, he would buy absurd quantities of it,” Ravi said. “He would go out and buy, like, 14 varieties of ice cream.”

Outside of his role as ice cream connoisseur, Starzl was a revolutionary transplant surgeon who performed the first liver transplant in 1967. He passed away on March 4 in his Schenley Farms home at 90 years old.

Starlz’s death ended what was a 36-year tenure at Pitt. He worked as both a professor and a surgeon, until 1991, for several Pittsburgh hospitals including UPMC Presbyterian and Children’s Hospital of Pittsburgh.

“He will be remembered for many things, but perhaps most importantly for the countless lives he saved through his pioneering work,” Chancellor Patrick Gallagher said in a statement released after Starzl’s death.

His surgeries pioneered the way transplants are done today from his successful performances of the first human kidney transplant in 1962 to the first human liver transplant, on 19-month-old Julie Rodriguez, just five years later. Starzl’s research mostly involved prevention of organ rejection, but his later work involved transplant tolerance and chimerism, the existence of cells from both the donor and recipient.

He also found time to mentor several medical professionals in the transplant field, including Abhinav Humar, the clinical director of the Thomas E. Starzl Transplantation Institute.

“The world has lost today the greatest figure in the history of transplant, and I have lost my greatest mentor,” Humar, who’s also chief of the Transplant Division of Surgery at UPMC, said in the release.

Many others felt a gap in their lives after Starzl’s passing. On March 11 — his birthday —  more than 400 family, friends and members of the medical community showed up at Heinz Chapel to honor his legacy.

Ravi, a co-director of the biotechnology, innovation and computation program at Carnegie Mellon University, remembers his grandfather’s propensity for making people laugh, but notes there were two sides to him.

“He had an extraordinary sense of humor, but when it came to things he was serious about, he was deadly serious — like a laser,” Ravi said, referencing how seriously the elder Starzl took his job in medicine.

Starzl was born in Le Mars, Iowa, in 1926. He was raised by his father Roman, who worked as an editor, publisher and owner of a local paper, and his mother Anna, who worked as a nurse. He graduated from Westminster College in 1947 with a B.A. in biology and went on to get his doctoral degree in neurophysiology from Northwestern University in 1952.

According to Ravi, his grandfather’s mindset about life and how to conquer a problem was the reason for so many of his achievements.

“He believed in the tradition of [English philosopher] John Stuart Mill — that the wheel of the world is moved by those who take risks,” Ravi said. “The one thing he admired above all other things was people trying new things.”

During routine movie nights with his grandson, Starzl would leave the captions on and pause the film “every five minutes, ”Ravi said, just to discuss what was happening in each scene.

“That’s something I won’t be able to do with anyone else,” Ravi said. “We would analyze a movie to death.”

Ravi described his grandfather as a “prankster.” Once, after his wife Natalie made him chili, the elder Starzl wrote up a fake award from the “International Gourmand Society,” placed it in a professional envelope and mailed it to their home.

Once, after Ravi’s Natalie made his grandfather chili, the elder Starzl wrote up a fake award from the “International Gourmand Society,” placed it in a professional envelope and mailed it to their home.

“You could always tell it was my grandfather because the name would be something ridiculous. The name he used that time was ‘Finkle Grouper,’” Ravi said.] “My grandfather retained his dignity, his fearsome intellect and sharp wit to the very last instant.”

And for those who didn’t have the chance to directly work with him, including registered nurse Kelly Kaupinis, 23, who works at UPMC Presbyterian, the impact Starzl had for transplants is something she sees in her work to this day.

“If it weren’t for people like Starzl doing the work he did, I wouldn’t be able to help people in the same way, like a recent patient I witnessed who recovered from a double lung transplant,” she said. “And I think it’s pretty awesome that he made that difference here in Pittsburgh.”