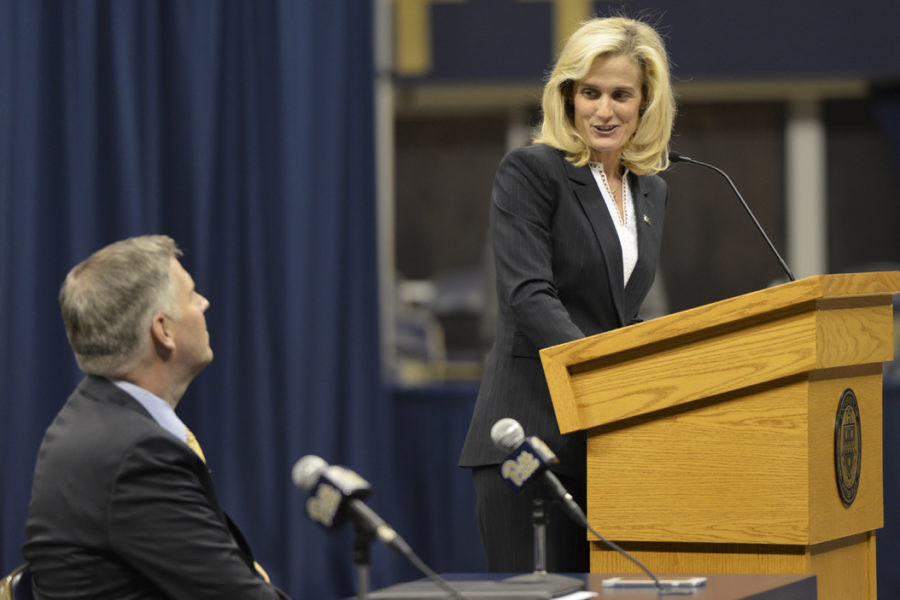 Basketball season is over, but history was made Monday on the hardwood floor of the Petersen Events Center.

“A new barrier has been broken,” Gallagher said before officially introducing Lyke at a press conference at the Petersen Events Center Monday afternoon.

Gallagher offered special thanks to Juhl, the retired vice president and dean emeritus of pharmacy, who assumed the role of acting athletic director while leading the search committee for the second time in two years.

“We should have a saying here at Pitt: ‘When in doubt, call a pharmacist,’” Gallagher said.

Juhl said there were dozens of qualified people in the University’s pool of candidates, but Lyke’s resumé stood out.

“When you get to meet somebody personally, you get an idea of how they would fit with our University, our values and our system,” Juhl said. “She had outstanding experience, and she nailed the interview. She grabbed it by the throat and never let go.”

“I love the people at Eastern Michigan, and I love what we were able to build,” Lyke said. “I wanted to be at a place where athletics is in the university’s DNA. That is exciting to me. And to be at a platform where you can compete against the best of the best.”

Lyke had a distinguished athletic career of her own before making the transition to the administrative field. She was a two-time team captain and four-year letterwinner as a first baseman on the University of Michigan’s softball team, helping lead the Wolverines to the 1992 Big Ten championship.

“Athletics is in my DNA, too … my parents were both college athletes and my brother, too,” Lyke said. “I fell in love with everything about intercollegiate athletics and what it represents.”

She earned her bachelor’s degree in education at Michigan and a Juris Doctorate from the University of Akron School of Law.

Prior to arriving at Eastern Michigan, Lyke served as an athletic administrator at Ohio State University for 15 years, rising to the rank of senior associate athletic director in 2013. Lyke also held positions at the University of Cincinnati and with the NCAA.

EMU captured 16 Mid-American Conference team championships and 17 MAC Coach of the Year awards in Lyke’s time with the program. The MAC awarded the Eagles with the prestigious Cartwright Award for all-around athletic department excellence in 2013-2014 — her first year at the school — then EMU followed up by winning the Jacoby Award for female athletic excellence in 2014-2015.

The Eagles were no slouches in the classroom either under Lyke’s watch. EMU’s student-athletes earned the highest term and cumulative GPAs in school history during the fall 2016 semester, and EMU achieved a school-record 81 percent Graduation Success Rate for 2015-2016.

Lyke also made strides with the athletic department’s fundraising at EMU. She conceived and implemented “Eagles Pride,” the first annual fund in EMU athletics history, in 2014. Her engagement with donors helped garner a $6 million donation in 2017, the largest cash gift in the university’s history.

EMU is also finalizing plans for $35 million in spending on improvements to athletic facilities, according to the Detroit Free Press.

But her time at EMU did include a minor controversy involving the school’s athletic budget and concerns over excess spending on the football program. According to Michigan Radio, the university lost $52 million over the 2014-2015 and 2015-2016 seasons, with the majority of those losses paid for by students and taxpayers.

The football program’s ineptitude caused many, including Michigan Radio’s John U. Bacon, to suggest the school drop its football program altogether or at least consider moving down from the Division I level.

But Lyke refused to budge, and the Eagles rewarded her persistence with the biggest turnaround of any major college football team in the country last season.

After the Eagles finished the 2015-2016 season with a dismal 1-11 record, Lyke began looking into acquiring passports for the team to travel to the Popeyes Bahamas Bowl — even though it would require at least six wins for EMU to qualify for a bowl bid.

Sure enough, the Eagles finished last season 7-5 and earned the trip to the Bahamas Bowl — their first postseason invitation in 29 years.