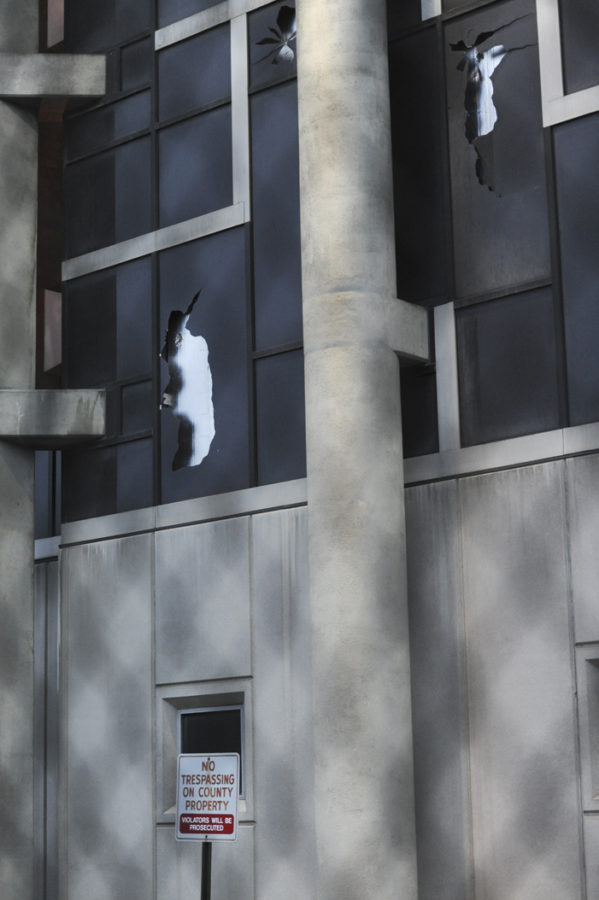 After three days of protests in solidarity with inmates striking at the Allegheny County Jail, only a dozen supporters remained outside its fortified walls Tuesday night.

The tired group trudged into the jail’s bright lobby at roughly 9:30 p.m., and then filed into a small nondescript gray court room.

There, they watched on a small T.V. screen as a few of their friends were brought in front of a judge to hear the charges they had accrued the previous night — some had court dates set for the oncoming morning.

The small audience, sitting in silent solidarity, were the remnants of a protest supporting inmate’s demands for adjusted living conditions. TeOnna Ross, the lead organizer with the ACJ Health Justice Project — an organization dedicated to making sure inmates receive comprehensive health care — said that about 80 prisoners engaged in a sit-in Friday through Saturday night. The inmates refused to leave their cells or participate in work duties to raise awareness about unjust living conditions, particularly regarding medical care and grievance procedures, Ross said.

The jail, however, is refuting that the sit-in ever happened.

“Contrary to reports made by the group that has been organizing the protests over the last few days, there are no sit-ins or protests going on inside the jail, nor have there been,” ACJ Warden Orlando Harper said yesterday in a release provided by Amie Downs, communications director for Allegheny County.

Despite the county’s refutations, a group of 20 to 25 protesters held a “noise demonstration” Monday night, which involved banging drums and clanging metal pipes together in an attempt to bring inmates to the windows. Pittsburgh Police said that the protesters turned to using rocks and fireworks, which led to 11 arrests, according to a Department of Public Safety press release.

The Monday night demonstrators started to throw rocks above the jail’s fence, breaking windows on the lower level and damaging a security camera, police said. Once police arrived on scene, they detained 11 individuals, and found knives, drugs and firearms — including a loaded 9mm pistol, according to the DPS press release.

While the ACJ Health Justice Project did organize a five- to 10-person rally in front of the jail on Saturday, it followed up in another Facebook post March 21 saying it did not organize the Monday night protest. The post did, however, declare that the group stands in solidarity with the demonstrators both inside and outside the prison.

“We do sympathize with those who feel frustrated by the abuses at the jail because they’re horrendous,” Ross said in an interview with The Pitt News.

Pitt’s Student Solidarity Coalition also said it stood in solidarity with the inmates and said in a tweet that “none of the arrestees participated in militant action.” Some of the people gathered at the courthouse Tuesday night were from the Coalition, but they refused to speak to The Pitt News.

The ACJ Health Justice Project first mentioned the inmates’ sit-in through a Facebook post on the organization’s page Saturday. Ross said the organization received demands in a handwritten letter from an inmate speaking on behalf of other inmates. According to the post, the inmates held the sit-in to address the following five issues:

Permit the Justice Project to have immediate access to the ACJ as volunteer interns, with designated areas within the jail to conduct inmate interviews and generate reports
Expand unit management staff to include more case workers or assistants to better manage the affairs of inmates
Change the method in which medical services are provided to inmates and ensure adequate medications are dispensed
Provide inmates a legitimate grievance procedure
Require the DOC and Prison Board to ensure that all administrative rules and DOC policies are accessible to inmates

Downs said the jail has become aware of these concerns and demands but never received a list from inmates.

“We received [the demands] when the media forwarded them to us,” she said.

While Downs said some of the demands were “without any specificity” and in some cases “fabricated,” making them difficult to address, she said some practices the inmates requested were already in place, such as a system to conduct interviews with inmates.

Through the Pennsylvania Prison Society, a group that advocates for prisoners and helps inmates reenter society after their sentences, Downs said volunteers can go into the jail and talk to inmates. In reference to concerns about grievance procedures, she said that if inmates have a complaint, there is a system in place for them to write it down, give it their pod supervisor and hear back within seven to 10 days.

Chief among ACJ Health Justice Project’s worries, however, was medical care. Ross said the organization is concerned that jail staff are not giving correct doses of medications to inmates.

Downs refuted this claim and said the Allegheny Health Network provides medical services at the jail and that “adequate medications are being provided.”

In response to conflicting accounts of procedures and events between ACJ and their inmates, such as these medicinal dosage questions, Ross said her organization wants third party reviewers put in place to “say in a neutral way what is actually happening.”

Downs said ACJ was open to communicating further with organizations, but the management would need particular examples of its errors to enact change.

“If there are specifics — specific inmates, specific incidences, or any other detailed information that this organization would care to provide — we’d be happy to look into it further, but without any specifics, it makes it very difficult to respond to it,” she said.

A previous version of this story reported that TeOnna Ross’s press release said prisoners participating in the sit-in refused to eat. This is incorrect. The press release only said they refused to leave their cell or work. This story has been corrected to reflect this. The Pitt News regrets this error.