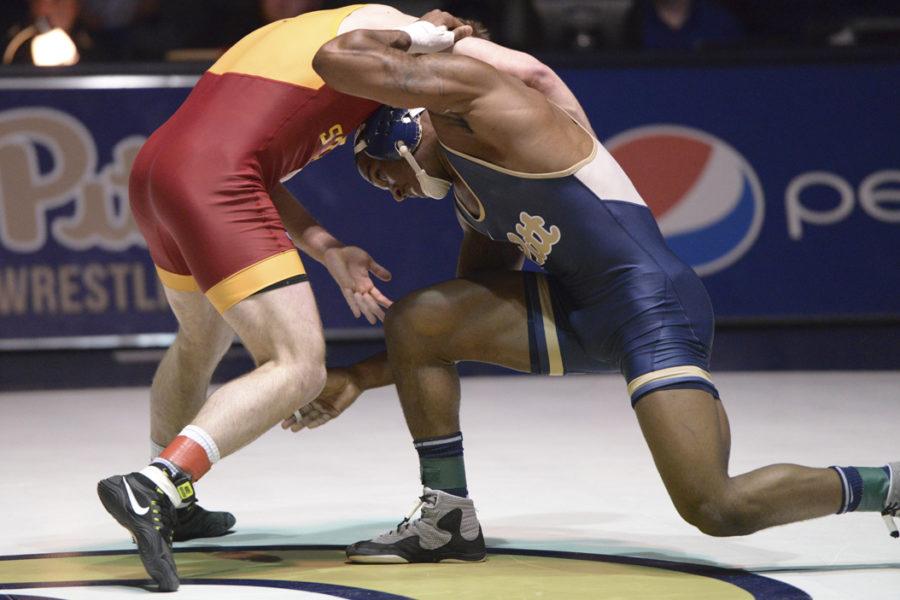 TeShan Campbell announced his decision to transfer to Ohio State two days after the conclusion of the NCAA Tournament, but his mind had already been made up for more than a month. Anna Bongardino | Staff Photographer

After 21 years in the steel city he’s called home, TeShan Campbell is moving out.

Campbell announced his decision Monday to transfer to Ohio State University to spend the final two years of his college career wrestling for coach Tom Ryan and the Buckeyes.

The standout sophomore started out wrestling at the Shadyside Boys and Girls Club when he was 6 years old. He only lost one match in his second year, then won a junior national championship by his third year.

Campbell went on to wrestle at Westinghouse High School, where he finished as the runner-up at the City League Championships in ninth grade. He transferred to Penn Hills High School before his sophomore year and capped off his high school career with an undefeated season and PIAA Championship — all with a sprained MCL.

From there, he enrolled at Pitt and qualified for the NCAA Championships with a 17-10 record at 174 pounds as a true freshman. Campbell dropped to 165 pounds as a sophomore and made drastic improvements, becoming an ACC Champion and finishing with a 22-4 overall record.

“Some of my best moments in Pittsburgh were in that wrestling room with those guys,” Campbell said. “I’ll definitely miss them because I never really knew what it was like to be on a true wrestling team, other guys that really wanted to win and stuff like that … I’ll probably miss that the most, the bond I made with those guys.”

Junior 133-pounder Dom Forys — another Pittsburgh product — believes the team will be able to overcome his absence, but he knows it won’t be easy.

“It stinks to see a Pittsburgh guy leave his hometown and go somewhere else and give a team that’s already doing well another guy,” Forys said. “It’s tough to see but I’m good friends with TeShan, I’ve supported him all the way. I’ll continue to support him.”

The allure of the Buckeyes’ program proved too much for Campbell to resist. Ohio State is coming off a second-place finish at the 2017 NCAA Championships and is only two years removed from winning the 2015 NCAA Championship as a team.

Campbell’s decision to transfer may have seemed like a snap judgment after a disappointing 2-2 finish at the NCAA Championships. But the truth is, his mind has been made up.

“I already knew I was going to Ohio State for maybe a month now. I just didn’t say anything,” Campbell said. “I just didn’t want that to be a distraction to the team. I already had a release form, I already knew … I was just going to hold out until the national tournament was over so everyone could focus on themselves.”

“When you have an opportunity like that, I had to just be real with myself. It was just, ‘Do I really want to put myself in the best position to be the best wrestler TeShan can be?’” Campbell said.

Although Campbell said he loved his time at Pitt, there were some aspects of the wrestling team’s culture he didn’t agree with.

He didn’t delve into specifics, but it’s been more than two months since Pitt dismissed head coach Jason Peters following an incident during the team’s trip to Evanston, Illinois, for the Midlands Championships. Campbell said he made up his mind to transfer soon after Peters departed, and the uncertainty surrounding the head coaching position at Pitt factored into his decision to leave.

“[Coach] Pete helped me a lot this year. He definitely had a big role in my success,” Campbell said. “Even when he was fired, he still reached out to me, kept talking to me … He was still watching my matches. He always still stuck around even when he wasn’t necessarily around. I appreciated that from him.”

Campbell said he received his release form around the same time as Peters’ departure. That’s also about the time when he heard from Ohio State and said he “liked what they had to offer.”

“Just some of the things that were happening throughout the season were pushing me away as far as how I felt about Pitt wrestling,” Campbell said. “I just want to put myself in a better environment.”

Campbell’s teammates are sad to see him go, but he said they’ve all supported him in his decision.

“We’re going to miss him, there’s no doubt about it. But I wish him the best of luck at Ohio State, as long as he’s not wrestling a guy in a Pitt singlet,” Pitt redshirt junior heavyweight Ryan Solomon said.

Campbell admitted it was a tough choice for him to make as the hometown kid and one of the faces of the program. But he said the support from his friends, family and people inside the program made him more comfortable with the decision.

Even though he’s taken the mat in a Panthers singlet for the final time, Campbell insists his former teammates haven’t seen the last of him.

“I’ll still be back, and when I come back, I’ll still be around with the boys. And I’m not one block away, but I’m still one call away, so I’ll always be around,” Campbell said.