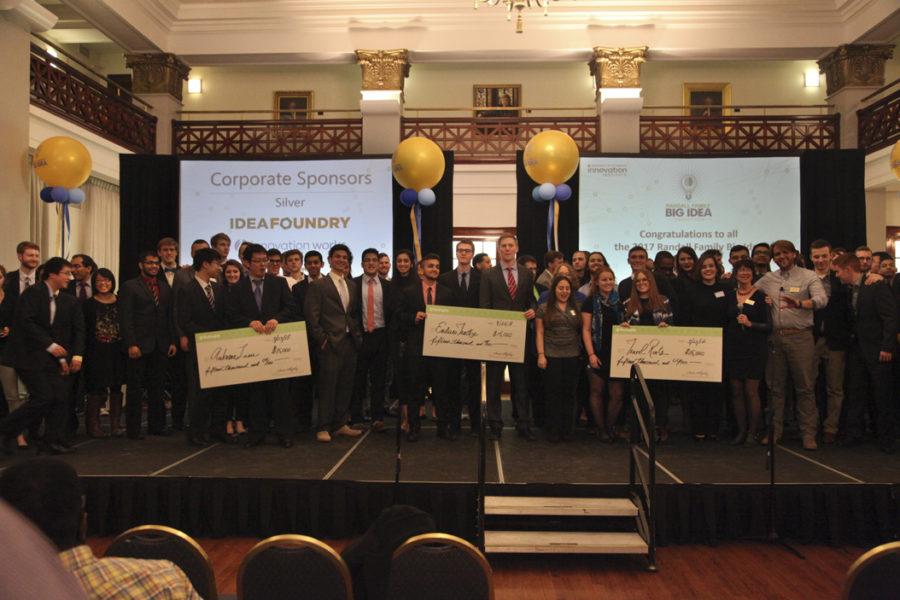 Looking for a monitor to measure your anaerobic threshold while you exercise? Need UV- resistant ink for your new tattoo? How about a phone case that reminds you when to take your meds and then dispenses them?

Pitt students might be able to hook you up.

Student entrepreneurs displayed these innovative ideas at the ninth annual Randall Family Big Idea Competition Awards Showcase, held from 4 p.m. to 6:30 p.m. in Alumni Hall Thursday. At the annual competition, run by the University’s Innovation Institute and open only to Pitt students, participants pitch and present ideas that could eventually blossom into startups.

Last year, the winner was POD, a startup developing portable oxygen devices for people suffering from obstructive pulmonary disease. This year, the $25,000 grand prize went to MediCase — a phone case created by a team of Pitt graduates and undergraduates that interacts with an app. The app keeps track of a person’s medication schedule and alerts them when they need to take their medicine and dispenses the pharmaceuticals for them.

According to Lauren Brock, MediCase team member and graduate pharmacy student, the inspiration for the device came from an innovation challenge that she and her teammates participated in about two months ago — they had to come up with an original idea in 24 hours.

“We got second place in that competition, and that’s when we realized we were on to something,” Brock said. “So we figured we’d enter it in the Randall contest and use the skills we’d develop and resources we’d receive through the contest to improve upon it. ”

2015 Pitt graduate Noah Snyder, CEO of Interphase Materials, served as one of the night’s emcees. Snyder said the competition teaches students how to alter their projects in response to criticism — he knows from experience, since he won the competition in 2015.

“The competition’s not just a fun game or activity but a pathway for students looking to take their ideas to the market and figure out how to adapt to change,” Snyder said. “They’re not doing it for credits but for passion.”

Pitt alumnus and trustee Robert Randall and his family founded The Randall Family Big Idea competition in 2009 in order to encourage the growth of an entrepreneurial culture at Pitt. It spans February to March of each year and awards a total of $100,000 in prizes. The competition lasted three rounds, starting in early February, with 200 students making up 65 teams to 35 finalists by the third and final round.

At the awards showcase, finalists showed their ideas to potential investors, such as Aaron Tainter, a program manager at Pittsburgh-based startup accelerator AlphaLab. In two past visits to the Randall Family competition, AlphaLab has been able to connect with past Randall competitors including Utranslated and Suitable, now their own independent startups.

“It’s a great way for us to get in touch with people who have fresh new ideas,” he said.

Apurva Patil, a senior chemical engineering major, said talking with investors was one of many skills his team’s entrepreneur-in-residence mentor coached him about. Patil was at the Showcase representing his team’s startup Endurotracker, a mouth- and nosepiece system that monitors a person’s respiration.

Clad in a suit and tie alongside his three team members and the hundred other competitors in the room, he spent the first hour of the Awards Showcase explaining his product to interested potential partners.

“Besides coaching us on communication, our mentors from the Innovation Institute, our EIR, also helped us make connections with professionals and experts who could help critique and advise us,” he said. “I really sharpened my business skills by participating in this.”

According to Don Morrison, an EIR at the Innovative Institute and fourth-year mentor for the competition, the results usually address a diverse array of needs.

“You have ideas for medical equipment that need to be FDA-approved to apps for traveling,” he said. “And the quality improves every year.”

Keynote speaker Jason Putorti, a 2002 Pitt graduate in computer science, venture designer at AngelList and Forbes 30 under 30 member, spoke onstage about his experiences with startups in Silicon Valley and gave advice to the aspiring innovators in front of him.

“Find a problem, one that a lot of people have, and figure out a way to solve it,” he said. “Form a big vision, but don’t rush in reaching it.”

Here were the night’s big winners:

The $1000 People’s Choice award went to h2Info, a startup that provides water-testing services to its customers.
The $1000 award for Best Video promoting their product went to the startup Root, a company providing a method for effective defense against cyber attacks.
h2Info also received a $2000 4th place award alongside the teams Green PEA, Helios Ink and Strategize.
The four 3rd place teams earning $5000 were Easy KeysE, Loop, Resect Assure and Dible. Second place winners receiving $15000 included Endurotracker, Travel Roots and Airborne Laser.
Medicase won the $25,000 first place prize. The team members are working on slimming down the case and will use the money to work toward marketing the product.