Mountain too high to climb against WVU, Pitt falls 8-4 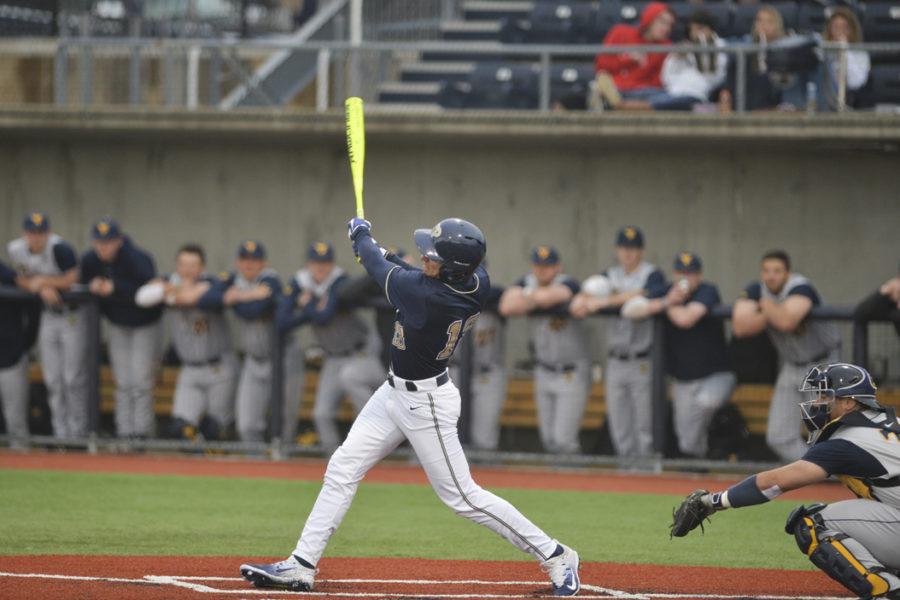 In the first of two Backyard Brawl games this season, the Pitt baseball team fell to the West Virginia Mountaineers, 8-4, due to a horrendous fifth inning in which the Panthers gave up five runs and committed three errors.

First-year pitcher Dan Hammer gave a solid effort for the Panthers despite a rocky start, going five innings and allowing two earned runs on five hits. Unfortunately for the team, sloppy defensive play leading to five unearned runs doomed Hammer’s start. But Hammer thought more of the blame lay with him instead of his defense.

“[I] definitely could’ve been a lot better. I had a ton of walks through the five innings,” Hammer said. “If I don’t have those walks, I think the defense could have been better.”

The Panthers were in trouble early after Hammer walked the first two Mountaineer batters. He turned things around quickly though, striking out the next batter before senior catcher Manny Pazos picked off WVU’s Kyle Davis at first. The Panthers managed to get out of the jam on the next play — a groundout to junior third baseman Nick Banman.

Pitt had a scoring opportunity of their own in the bottom of the first inning as the team had runners on second and third with just one out. But they were also unable to convert, and Banman and senior shortstop P.J. DeMeo were both struck out by Mountaineer pitcher Isaiah Kearns.

Both pitchers seemed to find their rhythm in the next few innings. The Panthers went down in order in the bottom of the second, and after Mountaineer infielder Kyle Gray drew his second walk, Hammer shut them down in the top of the third. After three innings, the teams had combined for only two hits, a pair of singles by Pitt’s fifth-year senior left fielder Jacob Wright.

West Virginia got their first hit of the game in the fourth, a leadoff single from Jackson Cramer. WVU’s third baseman Cole Austin then reached first on a bunt, and a subsequent sacrifice put runners at second and third with just one out.

The Mountaineers got on the board one batter later with a perfectly executed squeeze play, meaning the team used a bunt to drive in a run. Cramer came sprinting home before Hammer could make the play, and Austin came in when the first-year pitcher threw to first to record the second out. In the middle of the fourth, the Mountaineers led 2-0.

One inning later, everything fell apart for the Panthers. After West Virginia center fielder Brandon White got on base with one out, he found his way to third when Hammer was called for a balk, meaning Hammer made an illegal pitching motion. The Mountaineers converted, going up 3-0 on a ground ball which rolled right underneath the glove of DeMeo.

Two batters later, Austin hit a high fly ball to right field. Pitt sophomore right fielder Yaya Chentouf ran under the ball, and it appeared the Panthers would get out of the inning. But the ball bounced right off Chentouf’s glove, allowing two Mountaineers to come in.

After this, Pitt head coach Joe Jordano went out to the mound to talk to Hammer but decided to keep him in.

“[I told him] ‘Dan, you keep pitching. Obviously, we’re not doing a whole bunch to help you from a defensive perspective,’” Jordano said. “And that’s something he can’t control. All he can control is continue to throw pitches… [The mound visit] was more of a kick in the backside to my position players.”

West Virginia added two more runs off of a single by catcher Ivan Gonzalez and a throwing error by junior Pitt first baseman Caleb Parry before the inning mercifully ended. At the midway point of the game, the Mountaineers firmly controlled the game with a 7-0 lead.

The Panther offense, which had been struggling all game, almost capitalized off of inaccurate pitching in the sixth. With two outs, WVU reliever Tanner Campbell walked three consecutive batters, loading the bases. The Mountaineers then replaced Campbell with Sam Kessler, who struck out Pazos — the first batter he faced — to end the inning.

After a scoreless top of the seventh for the Mountaineers, Pitt got on the board in the bottom of the frame with a solo home run by Wright. Wright — playing with an illness — was the lone bright spot for the Panthers offense, going 3-4 for the game.

The Mountaineers scored another run in the ninth, but the Panthers showed some life in the last half inning thanks to two walks. The team had the bases loaded with nobody out and managed to get three runs, but West Virginia was eventually able to shut the door, winning 8-4.

After struggling for most of March, the Panthers’ offense seemed to get going this past weekend. The team was coming off of a three-game sweep of Virginia Tech, during which the Panthers scored 20 runs against the Hokies. The surge, however, didn’t extend into Tuesday night, with the team going a combined 2-26 outside of Wright.

“The things that we’ve been working on were all in order coming into today,” Jordano said. “We kind of got away from it a little bit, and you saw the result.”

The Panthers will look to bounce back this weekend when they return to conference play in a weekend series against Duke in Durham, North Carolina.

“We’re going to continue to work hard … It doesn’t matter who we’re playing or where we’re playing — it’s about what we do,” Jordano said. “We obviously had a rough day today, but we’ll have another opportunity on Friday.”