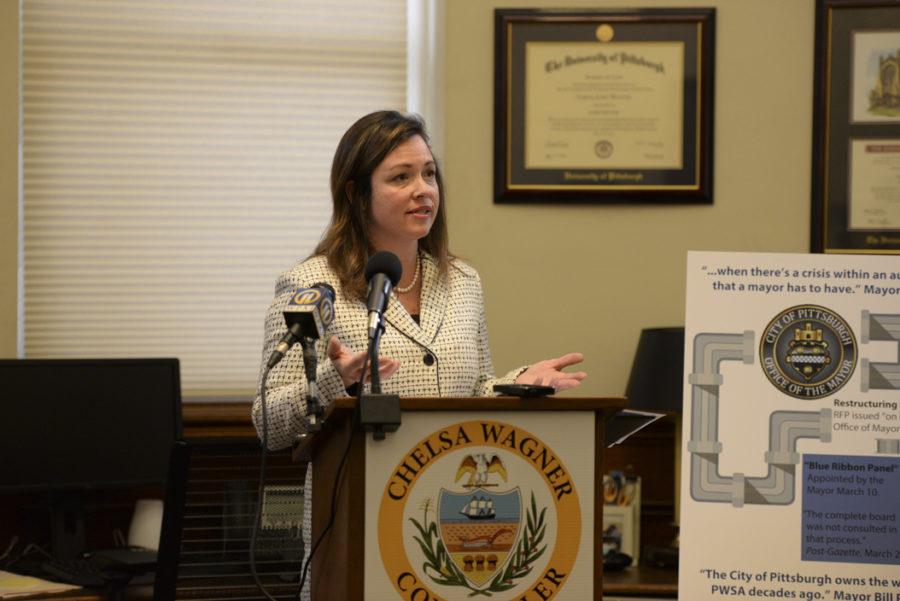 At a press conference in her Downtown office on Tuesday, Allegheny County Controller Chelsa Wagner considered the scope of lead in Pittsburgh households’ water and called it like she sees it: a public health crisis.

“One in four homes have lead lines, and the [Pittsburgh Water and Sewer Authority] doesn’t know where they are,” Wagner said. “It’s Russian roulette.”

The conference was not preempted by an official audit from Wagner’s office’s but instead by their own internal research, usually done to enforce fiscal responsibility and more efficient government. During the talk, Wagner criticised the speed and tactics that the PWSA and the city have used to address lead in Pittsburgh’s water — specifically that it is only replacing half of each afflicted homes’ lead service lines, or the pipes that run from the water mains under city streets into people’s homes.

The Authority is only half replacing lines because it claims it cannot work on private property due to state laws. The authority then leaves homeowners to shoulder the costs for the half of the line left underneath their lawns or driveways.

Looking at the problem, Wagner said the city should step in to halt these partial line replacements and begin replacing the entirety of every lead service line for free with public money.

Pittsburgh lead issues were brought to light in April of 2016, when the Pennsylvania Department of Environmental Protection ordered the PWSA to test it’s water for lead. The results came back at 22 parts per billion, well over the 15 parts per billion action level required by federal law. With the high levels, the DEP then ordered the PWSA to start replacing lead lines.

In elevated levels, lead, which can enter the water from deteriorating pipes, can stunt mental growth and cause hyperactivity and aggressiveness in children.

Wagner called the current solution, that puts half the cost of safety from lead directly on the PWSA customers, the “pay up or be poisoned” method at the conference.

In a statement for the city, Mayor Bill Peduto’s Chief of Staff Kevin Acklin responded by citing commonwealth law which prevents the city from working on residents’ private property.

“As most lawyers know, Pittsburgh, unlike Philadelphia, is barred by the state Municipal Authorities Act from replacing residential lead service lines,” Acklin said in the statement.

While the PWSA refused to comment on Wagner’s press conference specifically, it has previously refuted that the authority has the right to work on private land. It claims state law precludes it. Wagner instead asserted at the conference the public solution she advocates could be accomplished with a combination political will and funding.

“If [an issue is] a priority of the city, they find ways around [the law],” Wagner said.

Wagner attacked the “half measure on lead” in an official release today, citing the research of Virginia Tech’s Marc Edwards — who worked to expose the elevated lead levels in Flint, Michigan.

“Frankly, doing nothing is preferable to doing a half-pipe replacement,’” she said, quoting Edwards. When a lead pipe is disturbed while being half replaced, it frees additional lead sediment into the water.

The County Controller also said a full line replacement plan protected renters who don’t control what their pipes are made of. While federal protections exist requiring landlords to inform renters about lead paint, no law requires testing or informing renters about lead pipes.

To fund the full replacement of lead lines, Wagner said the city should lift funds from other sources, such as the $10 million gained in a tax deal with the Rivers Casino last fall.

Wagner was also skeptical of Peduto’s role in the PWSA’s organization. He appointed a committee to look into rebuilding the PWSA , and personally intervened in the contract negotiations of current PWSA Executive Director Bernard Lindstrom — a decision usually left to the mayoral appointed PWSA board.

On all points, Wagner felt the mayor was using his power to push for the privatization of the PWSA, a charge Peduto has denied. The Mayor has considered creating a public-private partnership for the city’s water, however.

“It appears the County Controller instead wants to preserve the status quo at the Authority and push massive tax increases on city residents, all while taking cheap political shots at those actually working to address the authority’s issues,” the statement from Peduto’s office said.

While lead has been a rising issue in the city since last April, the city officially announced its own action plan March 8. After announcing three separate groups — including low income families, homes with lead over 10 ppb, and houses in areas where lead lines were being replaced.

While it’s approaching one year since the DEP first cited the PWSA, the city announced a plan to allot free water filters to every PWSA customer with the $1 million gathered from People’s Natural Gas, the PWSA and the city’s own funds.

However, in neither the first release nor today’s release did the city clarify a time frame for filter distribution.

Looking at the plan, Wagner felt it was a good “band-aid” but refused to see it as anything more.

“Even though filters are a good first step, we aren’t seeing them,” she said. “There can not be a delay on a full solution.”